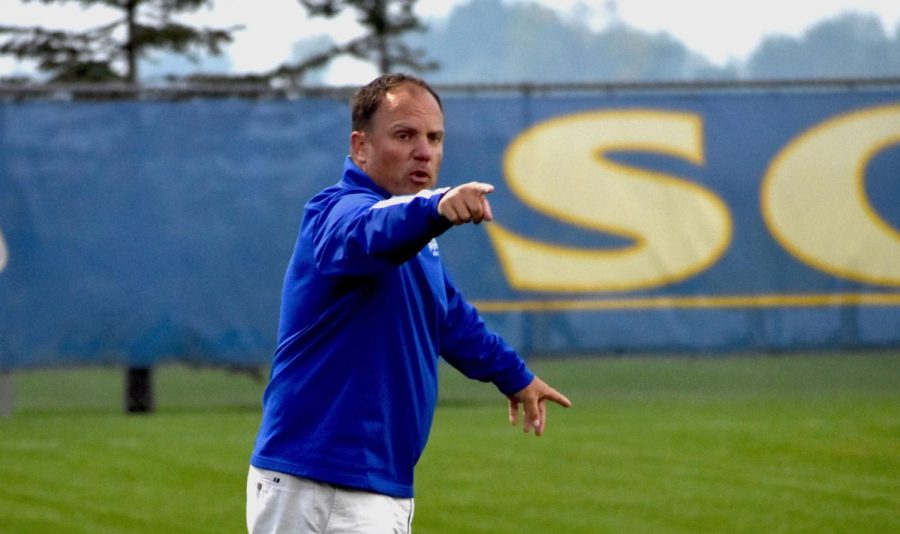 New South Dakota State soccer head coach Brock Thompson has applied wisdom from former coaches during his time on and off the field to become the type of coach and man he admired as a player.

“As a player at U of Mary, my coaches were very good on the field, but also, they were men of good faith and character,” Thompson said. “They shaped me as a person.”

Thompson said he is humbled by the opportunity to continue building the program he watched Wedemeyer work on.

Thompson said Wedemeyer was a positive mentor and spoke highly of other leaders and coaches who came before him, crediting those leaders for his ever-evolving coaching style and ways of facing the program head on.

Learning how to build solid relationships through the soccer program, community and players were important in being successful during his nine years of assisting under Wedemeyer, Thompson said.

Thompson said some of the most amazing moments happen in the team’s classroom meetings, on the practice field and in the locker rooms. His interactions with his players and his influence on each one of them is where his pride lies.

“He is really a team-first guy; the team is like a democracy with freedom and inclusion. It is team led and equal,” senior midfielder Julia Lam said. “We are all equal to him in making decisions.”

Senior forward Nicole Hatcher said Thompson realizes they are all in it together.

“He looks to us for help and we go to him for guidance,” Hatcher said. “He is not set in the mindset of ‘it’s my way or the highway,’ which is easy to respect when he is coming from a position of authority.”

Thompson doesn’t only help the players from an athletic standpoint, but helps on a personal level.

“He has been one of the most influential leaders to me, in a way that I would consider the most important part in my development as a person,” Hatcher said.

Thompson is excited to improve his team every day, focusing more on growth instead of setting goals, and pouring his heart and soul back into the program and players that have given him so much.