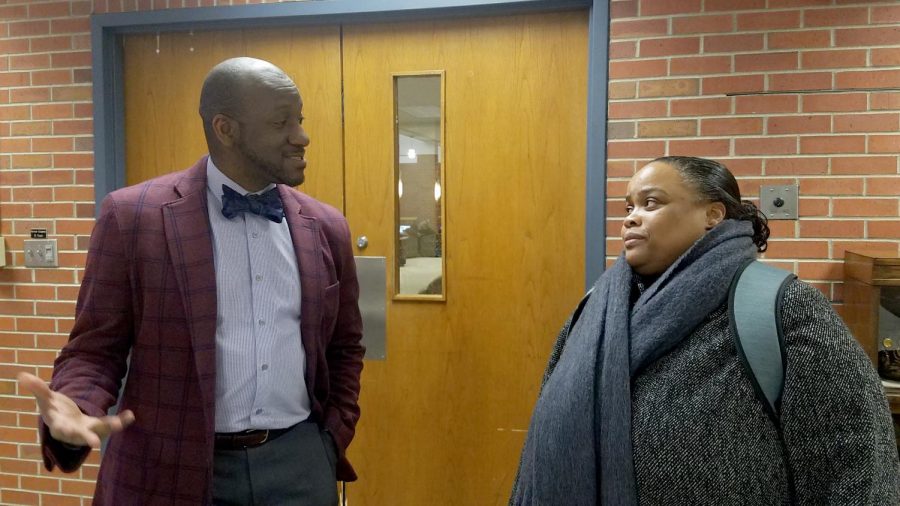 Attorney Michael Taylor and interim director of the Office of Diversity, Inclusion, Equity and Access Kas Williams discuss Taylor's presentation on being an African American attorney.

Michael Taylor, the deputy states attorney for Brookings County, hasn’t been to a Denny’s since 1992.

Taylor explained why in his presentation on struggles and stereotypes he faces as an African American lawyer and gave tips to aspiring law students on Feb. 19.

Taylor has been practicing as an attorney for 17 years and has his own practice. He first became interested in law when he was part of a class action lawsuit against Denny’s because of their discriminatory practices, though he says he continued to face difficulties throughout his career.

In 1992 Taylor and a group of friends attempted to dine at Denny’s, but the manager refused to serve them unless they paid in advance. While the manager initially said it was against policy to seat that number of people at once, they later discovered Denny’s had a “blackout” policy that prevented the seating of large groups of African Americans.

“Now, mind you, this was not 1952. This was not 1962. This was in 1992 and chances are, in different organizations, it probably still goes on,” Taylor said. “But this was the reason I really knew that a career in law was essential for me.”

The plaintiffs in the case, Taylor included, received a total of $54 million, which was the largest settlement allotted for a race-based class action at the time. Taylor used that money to go to law school. However, he found it difficult to find a job after passing the bar. While he attributes some of this to not graduating from a top-tier law school, he believes that racial stereotypes played a part.

“People expect me to be not as smart or experienced, only interested in certain types of law, or not willing to work as hard,” Taylor said.

But, he says there are some more noble assumptions that come with being an African American attorney.

“People expect you to be an ambassador for those who don’t know or trust the legal system,” Taylor said. “People who come into court and see me know they’re going to be treated with dignity and respect, but at the same time … [they] expect I’m going to be much more difficult on them because they think I have some sort of inherent bias against them.”

Taylor also gave tips for future law students, like look for median Law School Admission Test scores for the school, check the employment percentage of graduates and look for schools in the state’s students want to practice in.

“It’s not advice I haven’t heard before but it was a motivator to hear about his personal experiences,” said senior political science and Spanish major Genesis Duarte. “Though I’m not African American, I am a person of color so there will probably be some similarities [in our experiences].”

“We felt that he had a story that needed to be told,” Aranda said. “Oftentimes we don’t hear about the successes that people of color have, so we try to bring in people that show those successes and will really resonate with the students.

Taylor had many people to thank for his success, including his childhood television icons, mock trials and a class action lawsuit against Denny’s. Though he looks fondly upon his favorite television shows and still watches them, he probably will not go to Denny’s any time soon.