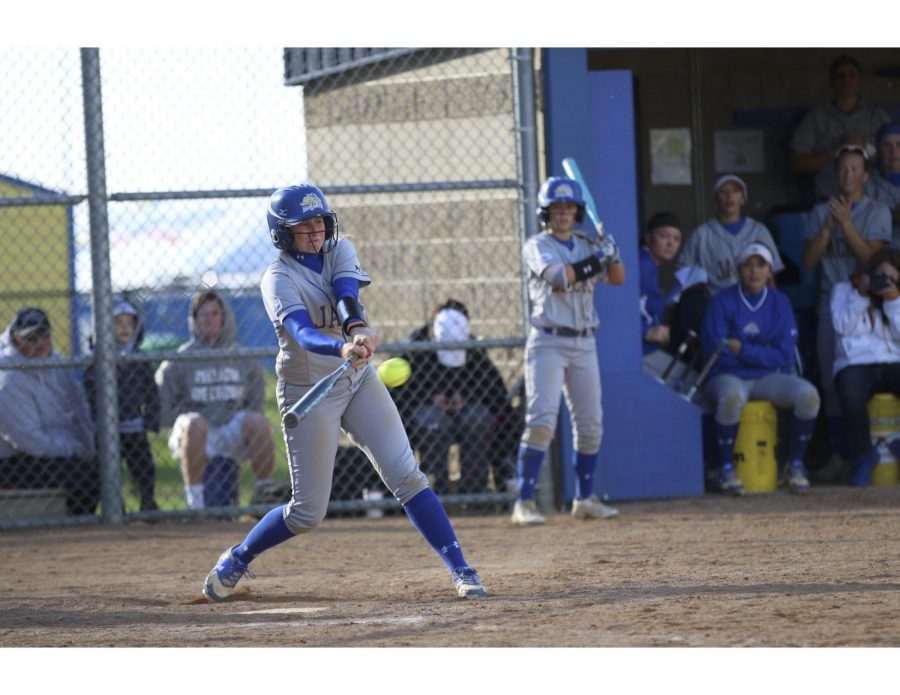 FILE PHOTO Junior Baily Janssen swings during the game September 25, 2016. The SDSU softball team is 21-10 on the season and will play South Dakota April 7 and 8 in Sioux Falls.

JACKSONVILLE, Fla. – A 9-7 win over Colgate and a 10-8 loss against North Florida, dropped the South Dakota State softball team to 4-3 on the season.

The Jackrabbits are competing in the University of Northern Florida Osprey/Dolphin Invitational in Jacksonville, Florida.  These were the first two games out of five the team will play in.

In the first game, SDSU weathered a four-run third inning from the Colgate Raiders with its own three-run inning.

Emma Hardin started the game, throwing into the third inning but it was Morgan DeMarais earned the win. DeMarais came in for relief and threw four and a 1/3 innings.

Senior first baseman Ali Herdliska was 2-for-4 at the plate with an RBI.

It wasn’t just the seniors who had a good day at the plate.

Despite putting forth a six-run fourth inning effort and having a seven-run lead, the Jacks allowed seven unanswered runs, before eventually giving up a three-run eighth inning that sunk South Dakota State.

Senior infielder, Yanney Ponce had a day at the plate, having four hits in four plate appearances. The Jackrabbits had nine hits.

Taylor Compton pitched all seven and 2/3 of the innings and was charged with the loss.

Up next, the Jackrabbits will take on the Colgate Raiders and Jacksonville Dolphins Saturday, Feb. 16.