Freshmen wrestling standouts make a name for themselves 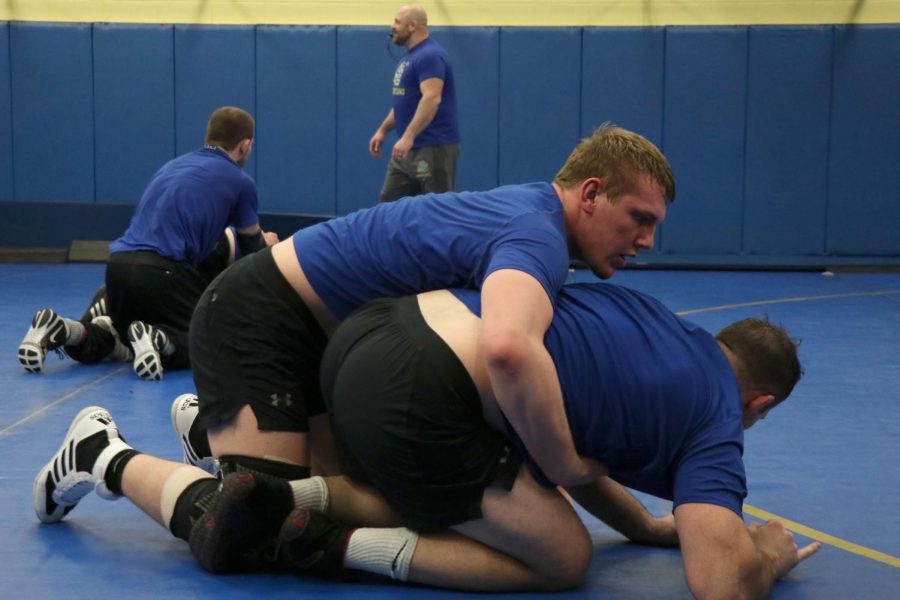 There are new names to become familiar with in the South Dakota State wrestling program.

With a season filled with injuries, including defending national champion Seth Gross being sidelined, freshmen Tanner Sloan and Clay Carlson, who are both redshirting this season, have emerged into the picture for the Jackrabbits.

While the two, according to first-year head coach Damion Hahn, contrast in body type and wrestling style. Sloan has more size while Carlson is smaller, but has a compact build, the two wrestlers share similar background stories.

Both grew up on a farm with Sloan living in Alburnett, Iowa and Carlson from Wilmar, Minnesota.

Unranked, Sloan went on to defeat the 10th, seventh and second-seeded wrestlers in the 197-pound bracket at the Ken Kraft Midlands Championships from Dec. 29-30. Sloan, however, wasn’t able to capture the championship as he fell to top-ranked Patrick Brucki from Princeton, which ended his 15-match winning streak.

Sloan’s impressive resume has gone beyond that weekend in Hoffman Estates, Illinois as he previously won the 197-pound weight class at the Bison Open, the Buena Vista Open, the University of Northern Iowa Open and most recently winning the Ridgewater Open in Willmar, Minnesota.

Sloan strives to put as much effort into wrestling as he can while on the mat.

“I just try to do the best I can and to try and put the right foot forward each day.”

At Alburnett High School, Sloan was a two-time state champion and a four-time state place-winner. In his senior year, he compiled a 47-1 record leading up to winning his second Iowa Class 1A state championship at 195 pounds.

“When you recruit kids, you are recruiting them in kind of the possibility because what they’ve done in high school was an indication but sometimes, that doesn’t translate over to college,” Hahn said. “So you look at talent, you look at work ethic, you look at their style per say and you really are taking a chance on anybody. Looking at those two, you knew they had something…..They had great foundations, good work ethic and in college wrestling, that can get you a long way. In the right situation, anything is possible.”

But the success in high school, translated for Sloan, even if it wasn’t immediate.

“After the first week of college practice, no,” Sloan said on if he expected to have this much success coming into his collegiate career. “But once I kind of got the hang of things, I knew it was going to be a fun year and I had something to prove out there that I could have a pretty successful year.”

When Hahn arrived in Brookings, Sloan was a part of the first group of recruits he called to convince them to stay with the program since Sloan and others were recruited by Chris Bono and his staff.

“We tried to take care of everything right away when the transition happened so we hopefully weren’t going to lose any recruits so we got on the phone and started calling everybody making sure that they were going to stay,” he said.

Those tournament wins have culminated an overall record of 21-2. The 21 wins is second on the team to only Carlson’s 24. 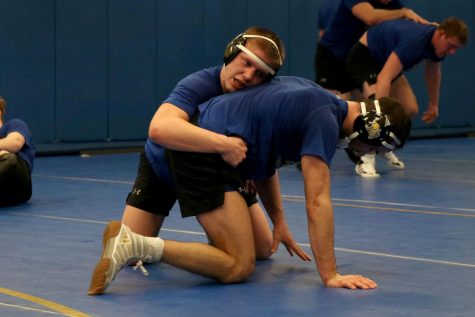 Carlson won 11 straight decisions earlier in the season and now has started up a six-match winning streak, including a 3-0 day at the Ridgewater Open on Jan. 12.

As far as tournament wins in 2018-19, Carlson earned the top spot in the 141-pound bracket at the Bison Open and the Finn Grinaker Open while being the co-champion the the Buena Vista Open, the Cusatis Open and the Ridgewater Open.

Carlson takes pride in his ability to stay in shape and his grip, but the key for him as of late has been the mental aspect of wrestling.

“The mental aspect of it is I am really trying not to focus so much on the wins and losses but I need to score as many points as I can,” Carlson said.

Carlson was a perfect, 48-0 in his senior season and won the 132-pound title at the Minnesota Class AAA state championship. Carlson was a two-time state finalist.

With working on his father’s 1,500 cow dairy farm, his commitment to wrestling and being active in school with being president of the school choir and a member of the band, Carlson was prepared for the busy life of a student-athlete. But wrestling was going to be his primary focus in college.

“I guess you can say Clay was my first recruit because he was not coming to SDSU,” Hahn said. “He was very close to making his decision with Nebraska.”

The Cornhuskers and Jackrabbits were the favorites on Carlson’s list of schools recruiting him, which also included Minnesota and Wisconsin. But visiting Brookings in April of 2018 and meeting with Hahn, along with the rest of the Carlson family, convinced him to come to SDSU.

While SDSU’s close proximity to Carlson’s hometown and his meeting with Hahn were two factors, wrestling with his brother, Colten, a sophomore Jackrabbit wrestler, played a significant role in why he chose the yellow and blue.

“Colten played a big part in (my decision) because that was always a goal of ours growing up that we could wrestle on the same college team together. That was just something that inspired the both of us.”

“They are good wrestlers and even better people. That’s what we want. We want to surround ourselves with one people likeminded. We want to surround ourselves with good people and we want to create an environment of success. Those two guys, outside of the (wrestling) room, they are such an absolute joy to be around. They are positive, funny, light-hearted in situations, but when they step on the mat, it’s business and they have to take care of that.”

In terms of the future, Hahn says the freshmen bring a new energy and perspective to what the program is trying to do.

“How could you not get excited of what they’ve been doing on the mat,” he said. “…..The future is bright and they are extremely excited about the possibilities moving forward.”

The Jacks will next play host to Utah Valley at 7 p.m, Thursday, Jan 31.