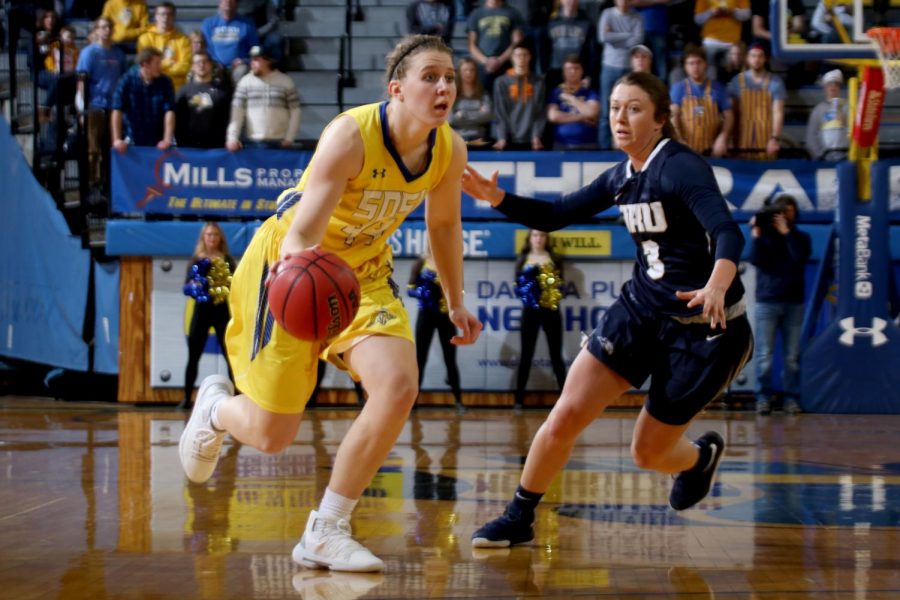 Sophomore Tylee Irwin scored all nine of her points in the opening 10 minutes, helping the Jacks build a 29-6 lead after one quarter that they would carry through to the final horn.

“I thought we played really well at the beginning,” senior Sydney Palmer said in a postgame radio interview. “Our starters came out and played hard and really set the tone for us tonight. It really helps us off the bench to find that energy from them.”

An Irwin layup gave the Jackrabbits an early 13-2 advantage and prompted a timeout from UND head coach Travis Brewster, but the break in action did little to quell the Jacks’ early momentum.

Defensively, the Jacks forced 10 turnovers in the first quarter and 21 for the game, keeping the game out of reach for the opposition.

“We defended well throughout the game,” SDSU head coach Aaron Johnston said in a postgame radio interview. “The only thing that slowed us down was foul trouble… We played so well in that first half.”

The Fighting Hawks didn’t roll over after the Jacks’ first-quarter onslaught, outscoring the visitors in the second quarter, but SDSU held a 43-23 lead at halftime.

SDSU carried its 20-point lead well into the fourth quarter before a UND layup in the final seconds made the final margin 18 points.

Johnston pointed to a slow, choppy flow of the game in the second half as a challenge faced by both teams as neither squad was able to gain much momentum after halftime.

“The second half was tough, I’m sure, for both teams,” Johnston said in a postgame television interview. “There were a lot of fouls and pace of the game wasn’t where anyone wants it.”

The Jacks improved to 5-1 in Summit League play and will be back in action Wednesday, Jan. 23 when North Dakota State visits Frost Arena.