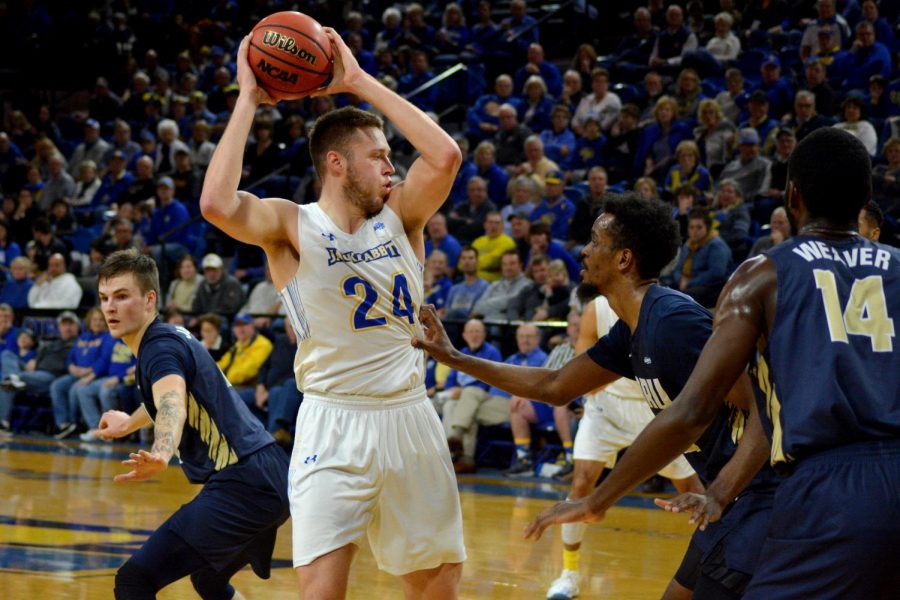 After back-to-back home wins against Denver and Oral Roberts, the Jackrabbits take the road to play the newest conference foe, the North Dakota Fighting Hawks.

Mike Daum got back on track, after scoring 14 points in two games, Daum exploded for 37 points against Oral Roberts.

North Dakota, who is in their inaugural season in the Summit League, is 2-3 in the conference with wins over the Western Illinois Leathernecks and Denver Pioneers.

The long-time rivals last played Dec. 12, 2017, in Frost Arena, when the Jackrabbits defeated the Fighting Hawks 99-63.

It’ll be the 188th time the two programs have taken the court, but the first as Summit League foes. North Dakota owns a 104-83 advantage, but the Jackrabbits have won five of its six Division I contests.

This season, the North Dakota team has seen its fair share of ranked teams, facing off with both the No. 12 Kentucky Wildcats and the No. 15 Marquette Golden Eagles.

“They are a veteran group—a team that shares the ball—and when they can get a rhythm offensively, especially in transition, they can be really good.” said head coach T.J. Otzelberger in a weekly update. “Our focus is going to have to be to get back, get our defense set and make sure we keep them out of the paint.”

A look at the Fighting Hawks

Offensive production hasn’t been an issue for the Fighting Hawks. As a team, North Dakota is averaging 76 points per game and allowing 72.

Conner Avants has paced the Fighting Hawks’ offensive charge with 12.8 points per game.

“Avants is their go-to guy on the block … he can really score it in there,” Otzelberger said. “An undersized post player but really a blue collar hard working player.”

It isn’t just the 6-foot-7 forward who has made a difference thus far.