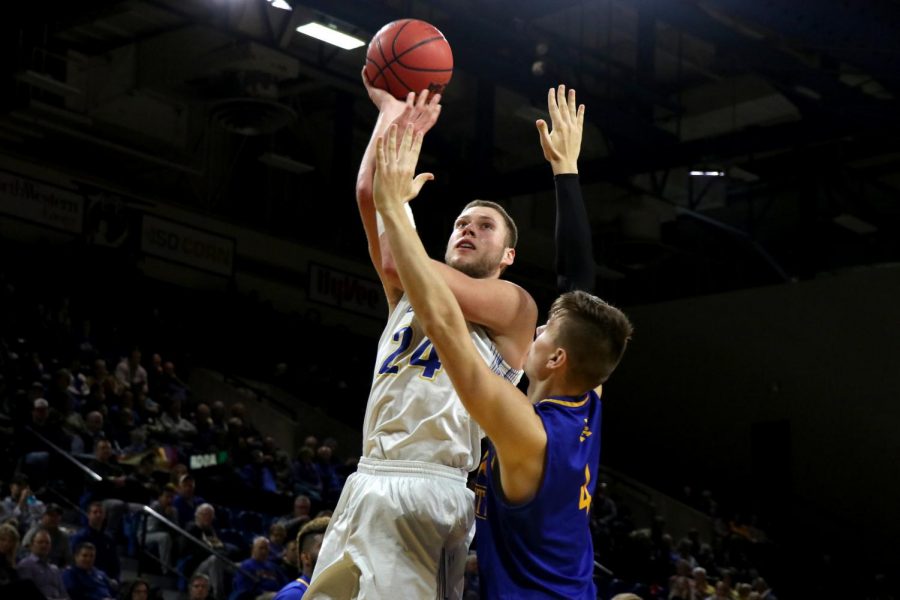 Mike Daum led the charge for the South Dakota State men’s basketball team as he scored 37 points of its 84-65 win over Oral Roberts.

Prior to Saturday’s game Daum struggled to score the ball.

“We wanted to make a concerted effort to go into Mike and get him scoring the ball around the rim,” said head coach TJ Otzeltberger after the game. “Our guys did a great job finding him and Mike did a good job making plays and that proved to be the key to us coming out with a victory.”

Entering Saturday’s game, SDSU and Oral Roberts were tied for second seed in the Summit League with a 3-1 record. This game decided who was going to take the number two spot behind Purdue Fort Wayne in the standings.

Mimicking their Thursday night win over Denver, the Jacks came out firing on all cylinders —  jumping to a quick 16-5 lead. This continued to an overwhelming 30-9 lead not even 10 minutes into the game.

With 10:23 left in the first quarter, Daum scored an and-one basket, passing Bo McCalebb and moving into the 25th position on the NCAA all-time scoring list. This would later be followed with another bucket in the second half, lifting him into 24th position all-time, passing Byron Larkin.

The offense dominated during the game as familiar names topped the stat sheets with Daum ending with 37 points and Skyler Flatten and David Jenkins, Jr. each ending with 15 points.

Tevin King was all over the court with a career high in steals, totaling eight, and also notching seven assists.

Alex Arians had a fruitful night passing the ball as he racked up nine assists — helping the team reach 21 assists on the night.

The Jackrabbits will be back in action at 7 p.m. on Wednesday, Jan. 16 when it will travel to take on the North Dakota Fighting Hawks in the Englestad Sioux Center.