Jacks return home in hopes to rebound from USD loss 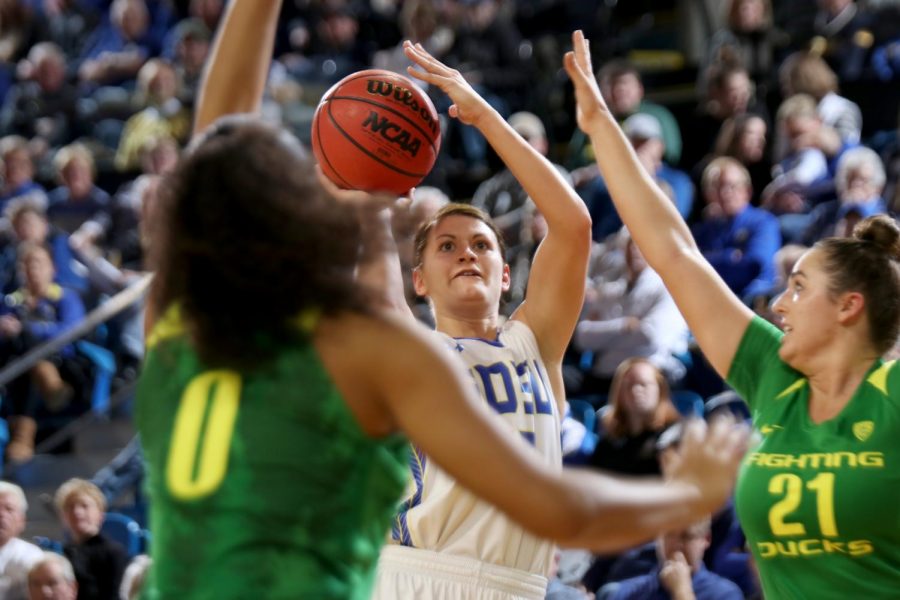 After playing five consecutive games away from its home court, the South Dakota State women’s basketball team returns to Frost Arena Wednesday night in the first of two Summit League games this week.

SDSU closed out its nonconference schedule prior to Christmas with games at Montana State and Wyoming before opening Summit League play with three straight away games.

On Wednesday evening the Jackrabbits will play host to Denver University, which currently sits atop the current Summit League standings with a mark of 3-1 in conference play.

DU comes to Brookings following back-to-back wins, including a 104-99 defeat of the South Dakota team that downed the Jacks Sunday afternoon.

On offense, the Pioneers feature a balanced attack — five players average at least 11 points a contest and will test SDSU’s defense.

“They’re just a hard team to slow down,” SDSU head coach Aaron Johnston said. “They shoot a really high percentage from the 3-point line — over 40 percent. As a team that’s phenomenal. We are a good shooting team and they blow the doors off of what we do.”

Lauren Loven leads the Pioneers in scoring, averaging 17 points per game (third in the Summit League), and is coming off outstanding performances in DU’s two most recent games.

The junior guard netted 32 points against USD and followed it with a 24 point outing against UND, sinking six 3-pointers in both games.

She also boasts the best 3-point shooting percentage in the Summit League, connecting on more than 51 percent of her attempts from behind the arc.

Madison Nelson, a junior forward for the Pioneers, has started all but one game this season and is capable of filling up the stat sheet on any given night.

Her scoring average of 15.3 points per game ranks fourth in the conference to go along with a conference-best 9.4 rebounds per contest.

SDSU will follow the game against Denver with a matchup against another opponent currently in the top half of the Summit League standings.

ORU owns a 2-1 mark in Summit League play, identical to that of SDSU at the time of publication and will travel of play Purdue Fort Wayne before making the trip to Brookings.

The Golden Eagles lost Faith Ihim, a first-team All-Summit selection last season, but have found production from others as three players have a scoring average of 12.3 points a game or better.

“They do a lot of the same things (as in previous years), but their offensive firepower has come a little more from the perimeter this year,” Johnston said. “… They mix up their defenses a little more this year too, so they’re going to be a tough team.”

Lakota Beatty is the Golden Eagles’ top scorer and ranks in the top six in the Summit League in points per game and 3-point field goal percentage, shooting better than 42 percent from long range.

The redshirt senior guard upped her scoring average from 11.5 a season ago to 14.9 points a game this season.