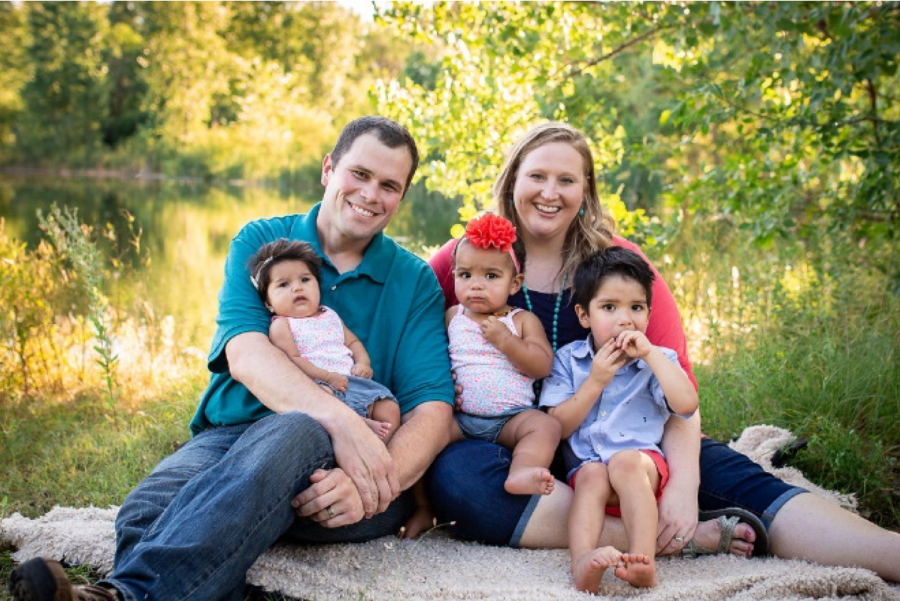 Mary Christensen’s mornings start by dropping off three sleepy children at daycare before heading to work.

It’s a part of her life Christensen once worried she would never experience.

Mary and her husband Cody wanted to have children, but paying off student loans had to be taken care of before they could think about starting a family.

Once they began trying to have children they weren’t having any luck. They turned to doctors to help them but couldn’t find success.

The Christensens began looking for alternative options for starting their family, and, after talking with friends who have adopted and went through that system, they were confident that adoption was the right choice.

“We felt a call to be parents,” Mary said.

The process of adoption is challenging and occasionally long. It begins with creating profiles for both the adoptive parents and the birth mother, then the couple must go through an FBI background check, fingerprints and be cross-checked for child abuse history.

“Mary and her husband did not enter into this decision lightly,” Melissa Hauschild-Mork, a friend of the Christensens, said. “They spent time in research and reflection to ensure that their intentions for becoming adoptive parents were paired with knowledge, qualities and characteristics to endure the trials and triumphs of parenthood.”

After getting the paperwork done, the Christensens started the first adoption process in December 2014 when a birth mother chose their profile. In the months leading up to the birth, Mary and the birth mother talked often, and Mary’s excitement level grew. Then the birth mother decided to keep the baby.

Mary said she was left feeling discouraged and hurt. Her excitement to become a mother ended for the time being. The couple continued putting their profile in front of other birth mothers.

“Birth mom cases make me emotional,” Christensen said in her office in Berg Agricultural Hall as she reached for a tissue. Many mothers have a tough choice when thinking about adoption though it is a decision that is made with the child’s best interests in mind.

Soon after their first adoption fell through, another birth mother chose them. The Christensens and the birth mother made a connection in May 2015 and the baby was born in June. Mary and Cody welcomed to their first baby boy, Isaac, into their family.

All of the Christensen’s adoptions are open adoptions through a private law agency. Open adoption gives the birth mother and any siblings the opportunity to visit and be a part of the child’s life.

Isaac was the fifth baby born to his birth family. Christensen said she is happy and overwhelmed with joy that Isaac’s mother chose adoption. He is now three years old and knows his birth mother and his siblings. Having a connection with his birth family will help him know his Native American and Hispanic heritage.

All of Christensen’s children are from slightly different backgrounds, but all share a Native American heritage. She has learned their backgrounds and thinks that living in a college town that features diversity will help when the children grow up.

Recently, the family of three added a new baby girl named Jade. Christensen connected with her birth mother throughout the entire pregnancy and was in the room when Jade was born. Mary said she was honored to be included.

Jade is now a year old and is becoming a “wiggle worm” as she discovers her feet and begins walking. Mary took a leave from her job to build a bond when she was a newborn.

A few months after adopting Jade, the Christensen’s were approached by Isaac’s birth mother and were asked to adopt another baby that she was expecting.

“Every adoption has its own story and journey, so it is important not to generalize,” Mary said.

She was worried and didn’t want to take away from Jade’s adoption process or the amount of attention she would be getting by adding another baby to the family.

After speaking with Jade’s birth mother and a lot of contemplation for both Mary and Cody, they decided to adopt the baby.

The lifestyle for Mary and Cody changed rapidly, from being able to stay at work late to going to daycare to pick up their children. Mary leans on family and friends for support.

“I have deep appreciation for Mary and am so grateful for her and her family in my life,” Kristen Uilk, a family friend, said.

When asked about what helps her get through each day, she raves about her husband, Cody.

“Cody is an amazing dad and so supportive,” Mary said.  She also mentions her support team that is made of friends and family members.

When Mary leaves the office, she excitedly goes home to her children.

“We feel lucky that we have awesome kids, and are beyond thankful their birth moms choose adoption,” she said.