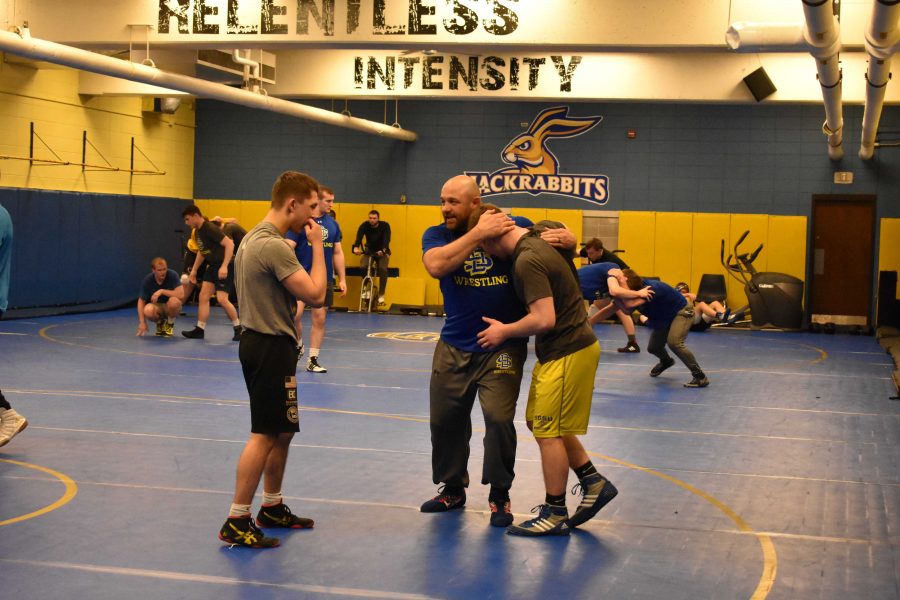 Damion Hahn had never stepped foot in the state of South Dakota before being named the head coach of the state’s lone Division I wrestling program in April 2018.

After head coach Chris Bono left for a head coaching position at the University of Wisconsin, SDSU’s athletic director, Justin Sell, called Hahn. Hahn said until that point he knew very little about SDSU’s wrestling program, other than the fact that it was ranked in the top 25 in the country.

The Lakewood, New Jersey native thought he would never leave Cornell University, where he served as an assistant coach and later as the associate head coach for 12 years. According to Hahn, there was even a plan in place for him to take over as head coach of the Cornell program down the road.

But after visiting the SDSU campus and considering his wife is from Minnesota, Hahn knew it was the perfect opportunity.

“When I came out, I was absolutely blown away by the campus, the people, the facilities, the community,” Hahn said. “There’s not enough to say about this place. It truly is a special place. You can go to a lot of universities in small towns and you won’t get the same feeling you get here.”

SDSU Athletic Director Justin Sell said in a statement released by gojacks.com after Hahn was hired that Hahn represents everything they are looking for in being able to take the wrestling program to the next level.

“His success both as a collegiate wrestler and coach, along with his ability to recruit high-achieving student-athletes on and off the mat, made him the ideal candidate. He is a tremendous ambassador for the sport who will work tirelessly to ensure wrestling thrives both on our campus and across the country,”Sell said.

Hahn helped the Big Red win 12 straight Ivy League dual championships and 11 consecutive Eastern Intercollegiate Wrestling Association team titles. He was a part of a program that had 50 All-Americans and 12 NCAA champions during his time as an assistant and associate head coach.

“He was with me in our most successful period of time,” said Rob Koll, who is in his 25th year as head coach of the Cornell wrestling program. “Obviously he was a major part of that success. He was fantastic in the homes when it came to recruiting and he was even better in the room when it came to coaching. So there was really no downside to Damion.”

Hahn said SDSU and Cornell share similar traits. The two schools and towns are similar in size, Cornell and SDSU are both land-grant institutions and both have strong agriculture programs. These qualities has made the transition easier for Hahn.

“We were dealing with a lot of the same profile-type athletes,” he said. “So I kind of knew what to expect coming in. So I was looking forward to that.”

Considering his career as a wrestler and a coach, there is reason for fans of the program to be excited about the new coach

This season, the Jacks return only two seniors, one being defending national champion Seth Gross.

Hahn hired Cam Simaz, a former collegiate national champion who Hahn coached at Cornell. In addition to Simaz, Cody Caldwell, an assistant coach under Chris Bono for the 2017-18 season, was hired to join the staff.

But new faces on the mat and changes to the coaching staff wouldn’t be the only changes Hahn made in his first few months as the new leader of the Jackrabbits.

“The one thing that we had a lot of success with at Cornell was moving guys up a weight, building them up a weight rather than cutting them down,” Hahn said. “Wrestling is as grueling as a sport as any and if we can keep our guys happy, training better, hydrated, more focused on what they are trying to accomplish rather than spending their time cutting weight, you get a little bit more out of them.”

With a tough schedule, which has already featured a loss against No. 11 ranked Arizona State and will include several ranked teams in this week’s USA TODAY and NWCA Division I Wrestling Coaches Poll, the Jacks will go up against No. 4 ranked Oklahoma State, No. 13 Minnesota, No. 12 Northern Iowa in 2018-19.

“When we look at the year, we train all year long for three days in March,” Hahn said on the team’s goals. “That is where our goal is, that’s where are vision is, that is the pinnacle.”

With the challenging schedule, Hahn said it is good for the team to have tough competition.

“That’s going to prepare our guys to know what to expect as we move down the line of the season,” he said.

According to Koll, the first season won’t be easy for his former assistant.

“They graduated a few and a few jumped ship with the other head coach,” he said. “….He’s going to have a tough first year. It’s not like he’s wrestling a weak schedule. I think people will be very forgiving and they understand that he is inheriting a program where the shelves are a little depleted, but it won’t take Damion very long at all to fix that.”

Koll said commitment he has for a program is a trait that stands out with Hahn.

“He’s very loyal, he is the kind of guy who tells you he is going to do something and it’s going to happen,” Koll said.

Nearly seven months after taking his first steps in South Dakota, Hahn already has plans to make SDSU a well-known program just like Cornell did in the last 12 years.

“I feel like SDSU is on the same trajectory, on that same path,” Hahn said. “People now think ‘Ok they took 12th in the country, they are relevant to a certain extent.’ Now the next step is to be consistent. We need to get to that top 10, we need to contend for trophies. My goal 12 years from now is wanting people to talk about SDSU the way they talk about Cornell today.”

Hahn will get his first taste of Frost Arena at 6:30 p.m. on Nov. 17 when the Jacks host Oklahoma State.