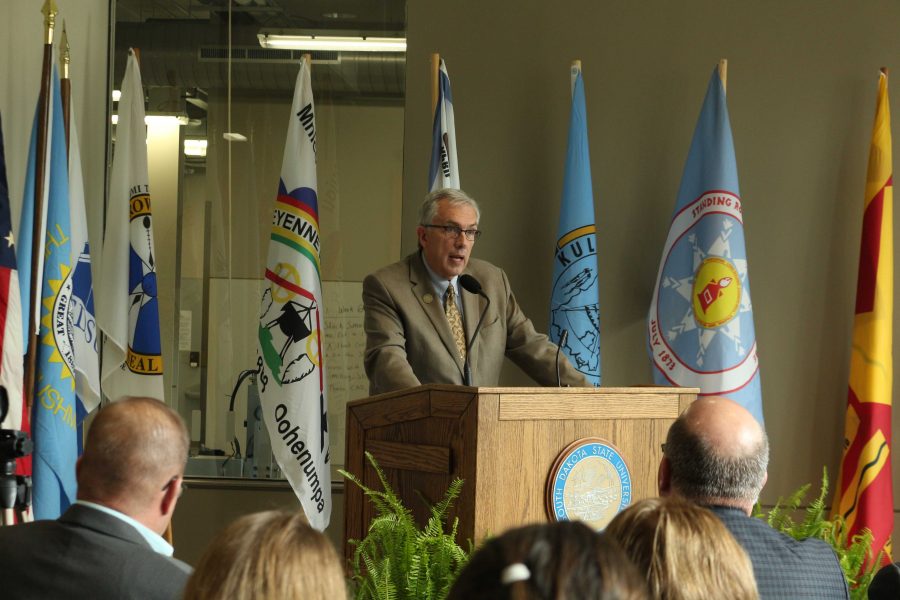 South Dakota State University President Barry Dunn announced a $4.1 million plan to support the Wokini Initiative, a program focused on increasing and supporting Native American enrollment at the university in a ceremony Oct. 5.

Two anonymous donors contributed $4 million for the creation of a new American Indian Student Center (AISC) and a one-time $100,000 donation for scholarships for students from the nine Native American tribes of South Dakota.

The tentative location for the new student center is on the Rotunda Green, at the south edge of campus near Eighth Street and Campanile Avenue. A final location will be determined pending approval from the South Dakota Legislature.

Scholarships for Native American students will be distributed from the Office of Financial Aid. Dunn said the university will work to ensure these scholarships are continued year after year, which will likely consist of $5,000 per year for qualified students.

In addition, the Wokini Initiative will include new and continued programming for Native American students and research projects focused on the needs of their communities. Along with increasing Native American enrollment, the initiative is also intended to preserve Native American languages and art.

Dunn’s mother was born on the Rosebud Indian Reservation in South Dakota. She later left when she worked to receive a degree at Iowa State University, before returning to South Dakota.

“I was a beneficiary of the higher education that she had received, so I want to make sure those opportunities as part of our land-grant mission of access to all are improved for Native students in South Dakota,” Dunn said.

Dunn was joined in speaking at the announcement by South Dakota Gov. Dennis Daugaard and Vice President of Student Affairs Michaela Willis in the lobby of the Architecture, Mathematics and Engineering Hall. Representatives from Brookings City Council and state government were also present.

Senior Marisa Hare is one of 259 Native American students who attend SDSU. The sport, recreation and park management major spoke at the Oct. 5 announcement for the Wokini Initiative.

“We’ve become one big family here at SDSU and having that new stand-alone building at the center of campus gives us American Indian students the feeling of everyone believing in us and the feeling of ‘we belong here,’” Hare said. “Today is a really proud day for SDSU and I’m proud to be considered a Jackrabbit.”

Although she will likely graduate before it is finished, Hare said she is most excited for the student center.

“Right now, being on the outskirts of campus, it’s really hard to let people know that there are American Indian students on campus and we are here,” Hare said. The current AISC was relocated to the lower level of the Enrollment Services building two years ago to make way for construction of the new Alumni Center.

We’ve become one big family here at SDSU and having that new stand-alone building at the center of campus give us American Indian students the feeling of everyone believing in us and the feeling of ‘we belong here.’

Director of AISC April Eastman said she looks forward to the new student center, as well as scholarships that will “help alleviate that burden” of enrollment costs for students.

“This initiative is so big that I don’t think there is just one thing that I am most excited for,” Eastman said. “A new facility, student scholarships, increased programming, hiring a Native American Recruitment Coordinator — it’s all exciting and, to quote the president, ‘long overdue.’”

The word “wokini” means “new life” or “new beginning” in the Lakota language. This symbolizes a “new beginning” for the university in its steps to expand programming to Native Americans, according to Dunn.

However, Dunn said that the initiative cannot reconcile the “troubled past” America has had with Native American people.

“Quite bluntly, I think what has happened to [Native Americans] is really beyond comprehension and there are irreconcilable grievances,” Dunn said. “This can’t rectify those past grievances. It’s simply to move forward now.”