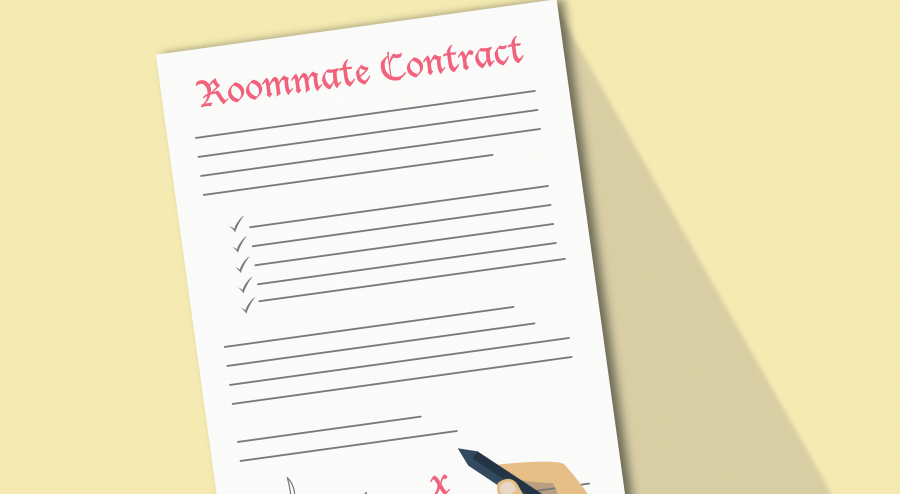 Roommates can be the best or worst people you ever live with. Nobody wants to have a troublesome roommate, but, if it comes to a point where confrontation is necessary, there are a few things roommates can do to mitigate the issues or awkwardness.

Roommate agreements are always a must here at South Dakota State University, but sometimes it is nice to create a personalized one tailored to you and your roommate.

Sarah Peterson, a junior family and consumer science education major, said a contract with her roommate benefited their relationship.

“After we did the roommate agreement our freshman year, my roommate and I picked all the things that were important to us and specifically noted down what we each wanted both of us to focus on throughout the year-like what time we went to bed, being clean,” she said.

Peterson said they kept up the contract until they moved into an apartment together.

“We updated [the contract] once we got older but now we don’t need it because we both know the rules to a T.”

Establishing ground rules and a guideline to follow can be a great way to hold you and your roommate accountable for the things that could make or break a harmonious living situation.

Sit down and have a conversation

Communication is key to any and all successful relationships, and talking things out can reveal common misunderstandings that can save both of you a lot of grief down the road.

Talking also helps keep a problem from blowing out of proportion. Small things like who takes out the garbage or not turning on the lights when your roommate has an 8 a.m. are things that can be discussed together, without an outside opinion like from a community assistant.

However, some issues can be more tricky to just talk about. For example, a personal hygiene problem can be difficult to address, for fear of coming off as rude. A simple fix to the problem would be to talk about buying a scented air freshener or multiple ones for the room. Presenting an idea to a solution the roommate might not even be aware of is a good way to fix the problem, without embarrassing them or making them feel bad.

Try to notice how your roommate acts around you, and trust your gut about them and how you both might work together in the future. If they are rude or constantly make you feel negative or unwelcome, trust those feelings.

Brailey Grant, a sophomore interior design major, explained her roommate trouble and how she knew something was off about her chemistry with her roommate.

“She took out her problems on me and others. And she wasn’t someone I could easily talk to. I tried to be there for her and help out, but nothing really changed regarding our relationship,” Grant said. “It was hard because she didn’t want to be at SDSU anymore and I felt like she didn’t even want to try and be friends with me.”

If all else fails, you can ask for advice from a parent, friend or, if you are living in a dorm, one of your community assistants.

Lauren Kerska, an English major, had a heated roommate situation and found outside perspectives helped.

“I didn’t feel comfortable talking to my roommate about the problems I had alone so I went to my CA. She made me feel welcome and safe with the situation. We decided to have a group talk with my roommate, but unfortunately it didn’t go as planned, and I eventually decided to move out,” she said.

Plenty of people, such as CAs or older classmates, are well equipped to handle roommate difficulties, and, though it may be awkward, reaching out to someone who can help will only make the situation better.

Don’t avoid any issues for too long

Don’t drag a problem out when it has the potential to be fixed early on. If you are having roommate problems, it may be tempting to be passive-aggressive toward them — also an easy way to avoid talking about your issue outright. However, a choice like that doesn’t help anyone in the long run, and is a definitely and unwise cop out.

Resentment can build up easily if an issue isn’t addressed right away, because acting on passive aggressive behavior only stirs the pot if it doesn’t effect a change in your roommates behaviors.

Even if being passive aggressive isn’t on your agenda, trying to wait an issue out is not the way to go either. You have to be direct about something that is bothering you. Waiting on more serious issues — like stealing your clothes or eating your food — makes the confrontation that needs to happen seem far more intimidating than it really is.

So, have a grown up conversation with your roommate if you have a problem with something they are doing, because a year in a dorm, or even better, a couple years in a house together, can get messy if everyone isn’t straight up with each other.