Running back by committee runs wild 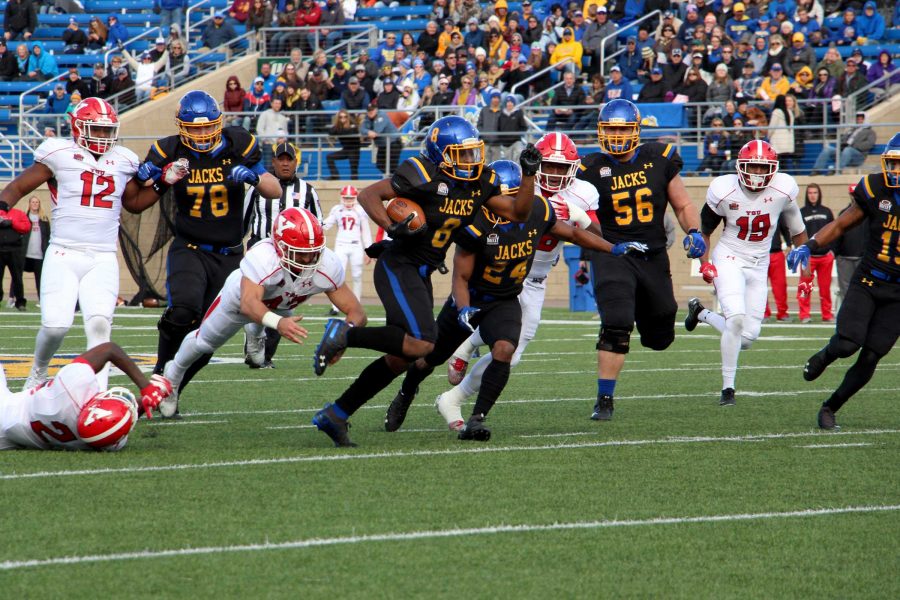 After relying on the play-making ability and arm talent of quarterback Taryn Christion for the past three seasons, the Jackrabbit running game has seen an increased role in 2018.

The talent and depth of the backfield was highlighted during fall camp. High expectations and praises from the coaches have looked well-deserved to this point in the season.

Depth at the running back position will be crucial as they will be without their top-rusher for the rest of the season.

Fifth-year running back Isaac Wallace recorded his last carry in a Jackrabbit uniform on Hobo Day.

He suffered an injury in the first quarter — ending his season and career at South Dakota State. Wallace led the rushing attack through five games with 413 yards.

The Jackrabbit rushing attack is averaging the 14th-most yards per game in the Football Championship Subdivision.

Jason Eck, the offensive line coach and running game coordinator, joined the SDSU coaching staff in 2016 with one particular thing in mind — running the football.

“That was (head coach John Stiegelmeier’s) charge to me. We have to get better at running the ball,” Eck said.

Last year, the Jackrabbits averaged 176.6 yards per game on the ground, but that average has jumped to 252.6 through five games this season.

The most dangerous part about the SDSU running back group is their depth.

“We have really good backs. We’re blessed that we have four guys who I think are top-level Missouri Valley backs. It gives you a lot of options to get them in the game and to give them carries and opportunities.” – Jason Eck, Offensive Line and Run Game Coordinator

This season, SDSU returned senior Wallace and junior Mikey Daniel to its backfield. Both backs have heard their names called regularly over the past two seasons and both are names Jackrabbit fans might have expected to see on the depth chart coming into the season.

The pair rushed for 998 yards and 16 touchdowns a season ago.

Daniel has picked up where he left off last season. Daniel has the most carries (47) and is tied for the team-lead in rushing touchdowns with four.

Two names Jackrabbit fans might not be quite as familiar with are those of true freshman C.J. Wilson and redshirt freshman Pierre Strong Jr. Both have showcased their talents and earned playing time in their first season dressing for the Jacks.

Wilson’s 271 rushing yards are second most on the team, including a 119-yard Hobo Day performance when the freshman found the end zone for his first rushing touchdown in college.

Strong Jr. has seen the field the least of the backs but has showcased his explosive playmaking abilities in limited action. The Little Rock, Arkansas native has a team-best 12.6 yards per carrying average (minimum of five attempts) and took a screen pass down the field for a 66-yard touchdown on his only reception of the season.

The Jackrabbit offense has reaped the benefits of having backs with unique skill sets on the depth chart this season.

While the quartet of running backs has been racking up the yards this season, there has been a fifth member of the fearsome backfield that has slipped under the
radar.

Junior fullback Luke Sellers does not have a carry this season, so his name has not appeared in the box score, but his teammates know the impact he has on the game.

“Without Luke, we couldn’t do what we do,” Daniel said. “He’s dominating guys left and right. Every play I see him pancaking somebody. He doesn’t get his credit when it’s due … but he’s a big part of our offense.”

If opposing teams weren’t worried about the Jackrabbit run game entering the season, all remaining opponents are now very aware of the Jacks’ ability to run the football.

“Just know that every Saturday we’re going to give you our best and if someone is lacking, someone else is
going to pick it up,” Daniel said.