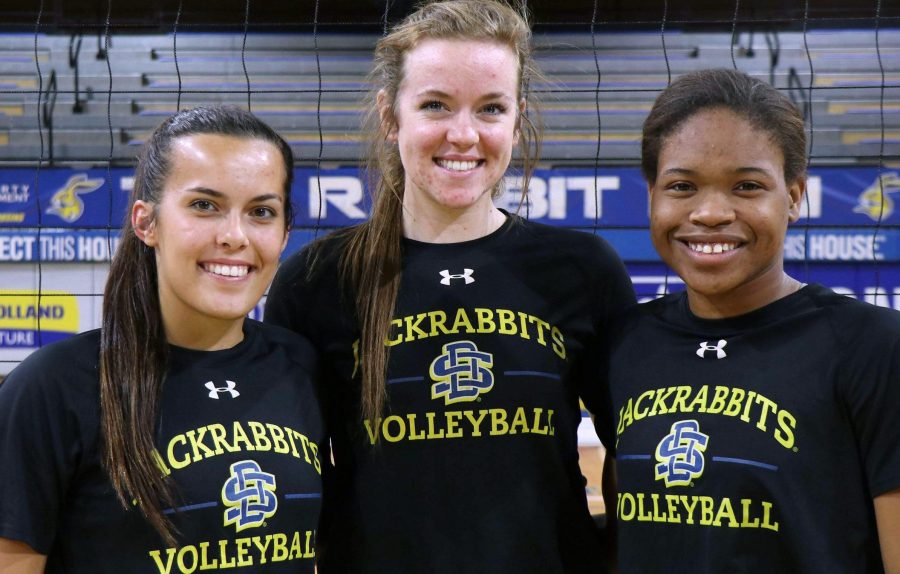 There is a youth resurgence on the South Dakota State volleyball team. Three true freshmen have seen their way into the starting lineup.

Last year, only one freshman saw the starting lineup routinely.

This year, freshmen are contributing in big ways. It’s all thanks to the recruiting class of 2022.

One of those recruits was first discovered during an early March Orlando Tampa Volleyball Academy tournament in Florida. SDSU Nicole Cirillo attended the tournament to watch a potential recruit.

While it may seem routine, it’s anything but.

Cirillo had her sights on a recruit but instead discovered a different player on a different court.

In the 10-court gymnasium, Cirillo saw a prospect by the name of Crystal Burk.

Cirillo wrote her name down, sent her an interest email and within a couple of weeks, Burk committed to the Jackrabbit program.

Burk, a Newnan, Georgia native, admitted that she knew nothing about SDSU before that fateful email. Despite not knowing much about the university, Burk looked at the status of the program.

“At first I was iffy about it, but I wanted to be a part of that change,” Burk said. “It kind of happened with my high school team too, we weren’t very good, but then we got to the Elite Eight.”

Burk led the Newnan Lady Cougars with 444 kills. Burk was also selected as the 2016 and 2017 Newnan Times-Herald All-County Volleyball Player of the Year.

This season for the Jacks, Burk has 73 points.

Burk isn’t the only true freshman for SDSU that has made an impact.

Ellie Thein and Sydney Andrews are two other freshmen who have made an impact thus far in the Jacks’ season.

Recruiting Thein and Andrews was much more traditional than Burk for Cirillo.

“At the time, I wasn’t really sure she was a good fit for the program,” Cirillo said. “She said she still wanted to come on a visit, knowing that.”

Being from a small Iowa town of about 2,500 people, Andrews experienced a higher level of volleyball during her club career.

“It was one of the best experiences I had,” Andrews said. “Coming from there [CIA] to here [SDSU] wasn’t that big of a difference.”

After her visit at SDSU, Andrews signed her National Letter of Intent to play volleyball for the Jacks.

“Stars aligned and that’s the way we wanted to go,” Cirillo said with a laugh.

Andrews has started in all 19 matches for the Jacks and has contributed 110 kills – tied for third on the squad.

Another key young player for the Jacks is Ellie Thein, a defensive specialist from Clara City, Minnesota.

For Thein, being a Jackrabbit was somewhat of a family tradition. Her brother, Ethan also attends SDSU. When she was looking at schools, Thein wanted to be able to major in human biology and play volleyball. SDSU checked those boxes.

When Cirillo was recruiting Thein, she admitted it was a bit hard to gauge how she would go over at the collegiate level.

“[She] hit in high school, it was hard to tell where she was going to pan out because she was attacking,” Cirillo said. “But, we knew she could add to the depth.”

Despite those concerns, Ellie Thien has panned out so far. She has seen five starts at libero for the Jacks and leads the team with 201 digs.

Like Andrews, Thein comes from a rural town of around 1,000 people and played her most meaningful volleyball during the club season. Thein played for Southwest Minnesota Volleyball based out of Marshall and won the Northern Lights qualifier for the 17s American Division in 2017.

So far, Cirillo has enjoyed what she has seen from her true freshmen as they try to turn the Jackrabbit program around.

“They know it’s not going to be easy,” Cirillo said.

Up next, the freshman and the Jackrabbits will face off with the Western Illinois Leathernecks at 7 p.m., Oct. 12, and the Purdue Fort Wayne Mastodons at 1 p.m., Oct. 14 with both games happening in Frost Arena.