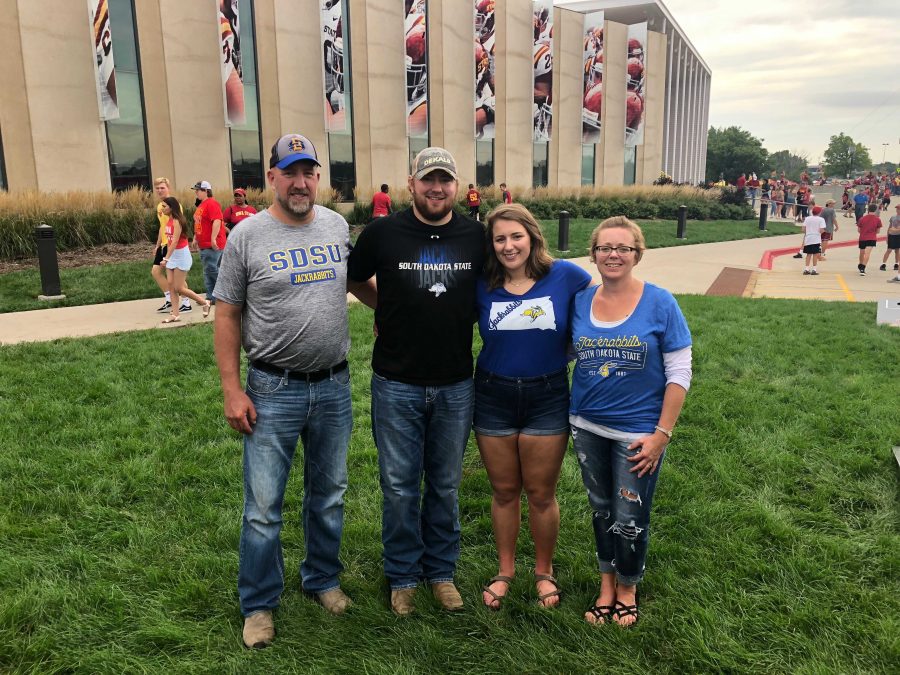 “You can go anywhere for college as long as it’s in Brookings.”

This is what Brianna Renaas, a third generation Jackrabbit, remembers being told jokingly while growing up on her family farm in Nunda, South Dakota.

For Renaas, a human development and family studies major, South Dakota State has been a family ordeal. Her older brother, cousin, parents and grandparents are all SDSU alumni — and her great-grandfather, Hilton M. Briggs, served as the university’s 13th president.

“I have always grown up on campus and loved SDSU. It’s always felt like home and I didn’t tour anywhere else,” Renaas said. “It wasn’t necessarily that I wanted to keep the tradition going but it just felt right.”

Renaas is only one of many second or third generation Jackrabbits.

Seth Friesen, a junior
mechanical engineering major, said his parents’
recollection of their college days played a role in his decision to go to SDSU.

“When I was younger, my family and I would be driving through Brookings and stop at the campus to drive up and down the roads while my parents reminisced about the time they spent and would point out where there used to be roads running or other changes to the campus,”
he said.

While Katie Lucas, a junior biology secondary education and chemistry education double-major, parents didn’t push SDSU in the same way, she said her attending SDSU has brought her alumni parents closer to her.

“Me coming to SDSU has brought them back,” Lucas said. “They’ve always been proud to be Jackrabbits, but now they are even more proud.”

Her parents get excited to be on campus. A “classic quote” from her parents when they visit has always been “this wasn’t there when I was here.”

“It’s gotten better throughout the years because it’s like year three. It’s less comparing their times and more of them understanding we’re a Jackrabbit family,” she said.

Lucas’ parents have begun attending more sporting events to see their daughter. Her mom even bought an iPhone just so she could FaceTime Lucas.

“It’s brought us closer together,” Lucas said. “I’ve noticed as the years go by, I call them more and reach out to them more. It’s me getting older and me wanting to share my college experience with them because they know, they’ve experienced it in the same place.”

Like Lucas, Renaas also finds it special to experience college in the same place her family did. Her bond is especially close as she is in Phi Upsilon Omicron, an academic honor society in Family and Consumer Sciences, and her mother was an adviser for the same chapter at SDSU from 2006 to 2010.

“It’s really cool,” she said.” You love this campus and you love your family and it’s meshed together.”