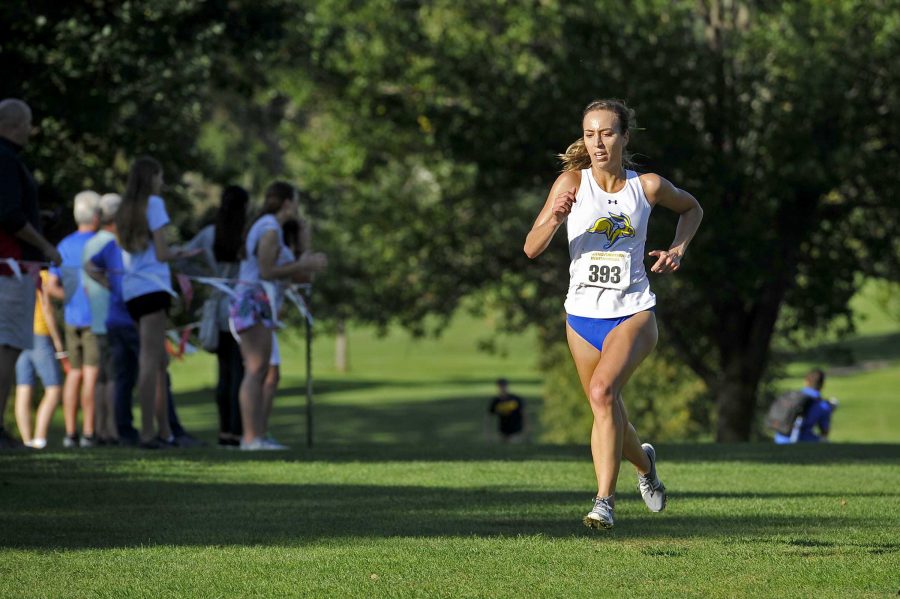 No female Jackrabbit had ever participated in the National NCAA Division I meet and it was looking like King would get in with an at-large bid.

King was coming off a first-place finish at the 2017 Summit League Championship race, which earned her Championship MVP.

To make her accomplishments more impressive, King had a stress fracture in her foot in April, which caused her to sit out for over half the summer. She was contemplating redshirting for the upcoming season but ended up racing in the third meet of the season, where she placed 81st at the 2017 Roy Griak Invitational.

According to head coach Rod DeHaven, it is not easy to get into the national meet as an individual. There were 35 teams in the same region and only four individuals on two non-qualifying teams get in.

As King’s eyes were glued to ESPN on a television screen in the Student Union on the day of the announcement the then-junior was faced with the disappointment of not seeing her name.

“My name wasn’t on there,” King said. “I just felt sick to my stomach and wanted to cry … It just kind of crushed my soul. I wasn’t ready to be done, but I feel like I was in good shape at the time.”

The toughness she learned from playing hockey back in St. Michael, Minnesota, where she was a captain and earned a combined nine all-state titles while participating in hockey, track and cross country, has helped her respond from any setbacks.

Since the track season was quickly approaching, King put her woes aside and turned her focus to getting better and helping her team.

After an indoor season, which featured winning a handful of races and resetting several school records in the eight events, King continued to dominate in the outdoor portion of the season and found herself in a position to make history once again.

Similar to cross country, no female track athlete has made it to the NCAA Championships in South Dakota State’s history as a Division I school.

In her third trip to the NCAA West Prelims in Sacramento, California, King participated in the women’s 3,000-meter steeplechase on May 25. She earned an automatic bid after finishing third in her heat with a time of 9:57.75 and would be going to Eugene, Oregon to compete for a national championship at the NCAA Outdoor Track and Field Championships.

King said it was a surreal moment for her.

“At the race, I knew I had to be in the top three to make it,” she said. “I was the third person across the finish line and I knew.”

Nearly six months after facing the disappointment in cross country, King would finally get her chance to represent her team, the athletic department and the university.

While it was a nerve-racking and an intimidating experience for King, she would not have traded it for anything.

“I hadn’t been that nervous for a race in college until I got to Eugene,” King said. “ … I wasn’t quite strong mentally at that point.”

King would capture a 12th-place finish in the second heat and finish 23rd overall in the 3,000- meters steeplechase semifinals. Her finish was not good enough to advance to the championship race.

“I really thought there was a chance of her being in the top eight and be a first-team all-American but it didn’t quite work out that way,” DeHaven said. “We both learned some things.”

As King enters her fourth and final year running for the Jackrabbits, she still has plenty of goals to strive for.

“Definitely to get to nationals in cross country and just to get that All-American title somewhere in either sport,” King said.

DeHaven says King brings a lot of qualities off the track in addition to her talent running.

“She is definitely an alpha when it comes to leadership,” he said. “She is a great spokesperson for the other women on the team and she is a fighter and that is what you hope to have”

“My goal is to leave here with my name everywhere,” she said. “It’s nice to know that my name is always going to be in that spot. People might break my records, but they can’t take away that I was the first one.”