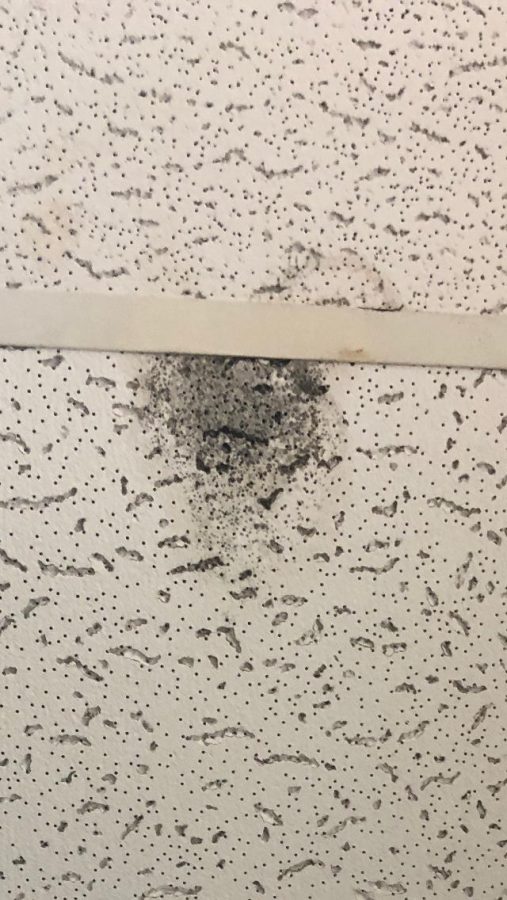 Mold on the ceiling of a Meadow North apartment taken on Sept. 17.

An outbreak of mold in the Meadows apartment complexes has caused problems for students and the university alike.

Last week, Director of Housing and Residential Life Rebecca Peterson sent an email to residents of Meadows announcing every unit would be entered and inspected for mold.

Mikayla Klusman and Tiana Gahm are both sophomores living together in Meadows North. To them, the email only confirmed a problem they noticed and reported a long time ago.

“[During move in] we noticed the mold growing on the running boards, on our dressers, in the drawers, on the desks, bedposts, in the sink and on Jaedyn’s (another roommate’s) mattress,” Klusman said.

Gahm moved into Meadows over a week early and was the first one to notice a potential problem.

“When I moved in the AC didn’t work, so it was hot and muggy in here and there was so much moisture,” she said.

She had to wait a week before Klusman could bring a dehumidifier.

Both Gahm and Klusman believe the mold played a role in them and their roommate getting sick. Gahm reported trouble sleeping, sore throats, a lost voice and overall discomfort.

Associate Vice President for Student Affairs Doug Wermedal said mold growth was common household mold and not black mold. The mold likely grew due to the perfect brew of conditions.

“The most important thing to address with mold is the moisture content of the air,” he said.

“Fifty-one percent of the issue is the moisture of the shower when four people take showers in the apartment,” Wermedal said. He added fans are being checked by maintenance crews to ensure enough moisture is being pumped out during showers.

Wermedal said the university will install dehumidifiers and air purifiers in any room that indicates bad air quality or has mold after conducting tests in Meadows apartments.

While only 15 units out of Meadows’ 160 apartments were affected by the mold, three units had students move out entirely.

Despite their frustration with the delay, Gahm and Klusman both agree hearing back from the university was a relief.

“I feel a lot better knowing that they are actually taking time to fix this problem,” Gahm concluded.

Wermedal said students have a right to feel the way they do.

“We want students to feel responded to, and I hope that we’re able to make sure that this is just a bump in the road,” he said.

The Meadows complex was constructed in 1994 and had a mold outbreak in 1998 — which was caused primarily by a dysfunctional air conditioning system. Upgrades were made to the building to prevent another outbreak from happening.