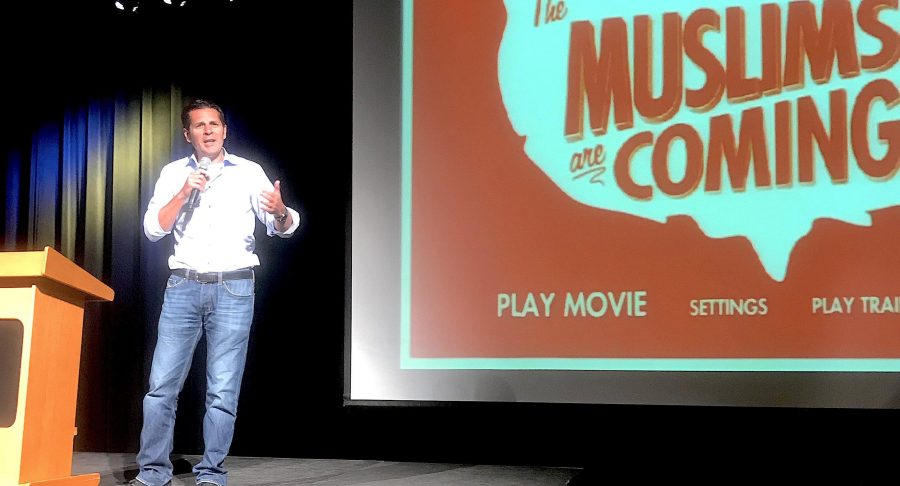 BRIANNA SCHREURS Dean Obeidahlla, comedian and co-producer of "The Muslims are Coming!" addresses the crowd before the showing of his documentary Sept. 20 in the Volstorff Ballroom in The Union.

When Dean Obeidallah stood in front of a crowd of SDSU students, staff and faculty and asked how many Muslims were in attendance, only one hand went up.

Obeidallah is wrapping up campus and community screenings of a documentary he co-produced and starred in called “The Muslims are Coming!” released in 2014. He was invited by University Program Council to speak to SDSU 7 p.m. Sept. 20 in the Volstorff Ballroom.

“[The film] is a vehicle to show the student body what Muslim-Americans are about,” he said.

The intention of the film, and of the standup comedy performances in the film, is to debunk preconceived notions about Muslims.

“The worst negative stereotypes you see against Muslims shouldn’t be the ones that define us,” he said.

Obeidallah said the media plays a big role in how the Muslim community is perceived by society, and he hopes his film has helped push back against some of the negative things people see on the news.

“We’re going up against some really challenging adversaries … in people like Donald Trump who will say ‘Islam hates us’ and ‘I should ban all Muslims’,” Obeidallah said.

Though the film was made and released before the era of Trump, his attitude toward the religion has acted as a catalyst for negative responses to Obeidallah’s message.

“I’ve always had people saying little things about being Muslim, but I never had death threats until Trump got elected,” he said. “He [Trump] didn’t create anti-Muslim bigotry, but he made people who don’t like Muslims a little more comfortable in spewing that hate.”

According to a CNN article by Daniel Burke, in 2016 anti-Muslim based hate crimes had a 67 percent increase, a level of violence that hasn’t been recorded since right after 9/11.

Despite an increase in crimes against his religion, Obeidallah said there’s no better time for all marginalized groups to come together and show strength in numbers, which is why his message stays the same regardless of how many Muslims are in the audience.