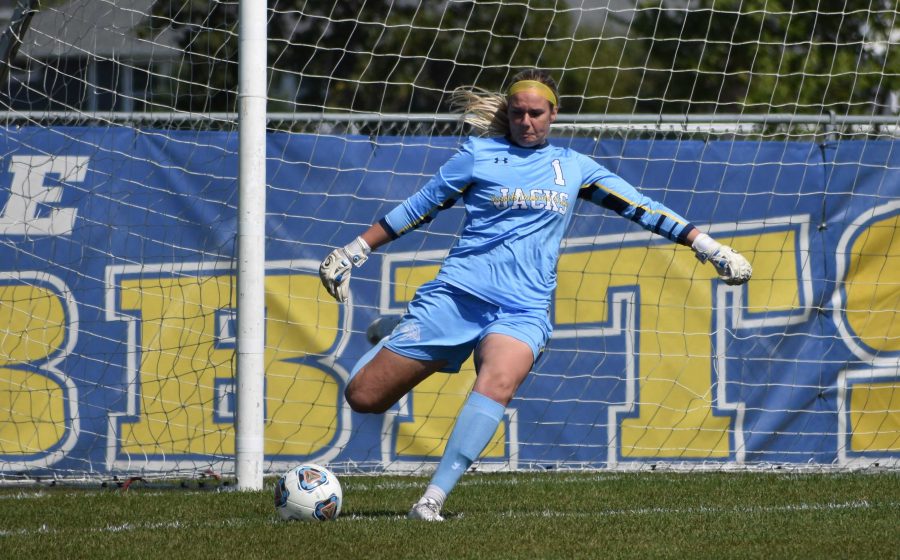 In a two-game home stand this past week the South Dakota State women’s soccer team split matches with a 1-0 victory over the Northern Iowa Panthers and a 2-0 defeat to the Arizona State Sun Devils.

The Jacks were coming off of a week in which they defeated Green Bay 2-0 and fell to Creighton 1-0.

When the Sun Devils (3-2) visited Fishback Soccer Complex, they managed to dominate the Jacks and outshot the home team by two points. SDSU had just two shots on target throughout the match.

Against Northern Iowa, the Jacks were propelled by a 15-minute goal from sophomore forward Marisa Schulz, her first goal of the year.

“I thought we had great energy, played with great enthusiasm,” head coach Brock Thompson told www.gojacks.com. “ … I really thought we were able to play the best half of soccer we’ve played this season in the first half.”

Against Creighton, the Jacks lost 1-0, snapping an 11-home game win streak — the last loss coming back in 2016.

The Jacks were unable to recover from an early goal that came in the ninth minute. Despite having the same number of shots, the Jacks had five fewer shots on target.

Senior forward, Bianca Madiona fired two shots in the match against Creighton, with one of her efforts on target. She also said that she thought they responded well to Creighton’s winning play on the 2nd, and will stay focused on their own consistency in future games.

Coach Brock Thompson felt the same way, saying that the team’s focus is always to try to play the best.

On August 31, the Jacks defeated the Green Bay Phoenix 2-0 at the Fishback Soccer Complex. Karlee Manding and Abigail Kastens scored the decisive goals in that game.

The Jackrabbits play against Idaho State at 5 p.m., Thursday in Pocatello, Idaho and Eastern Washington at 3 p.m, Sunday in Cheney, Washington.