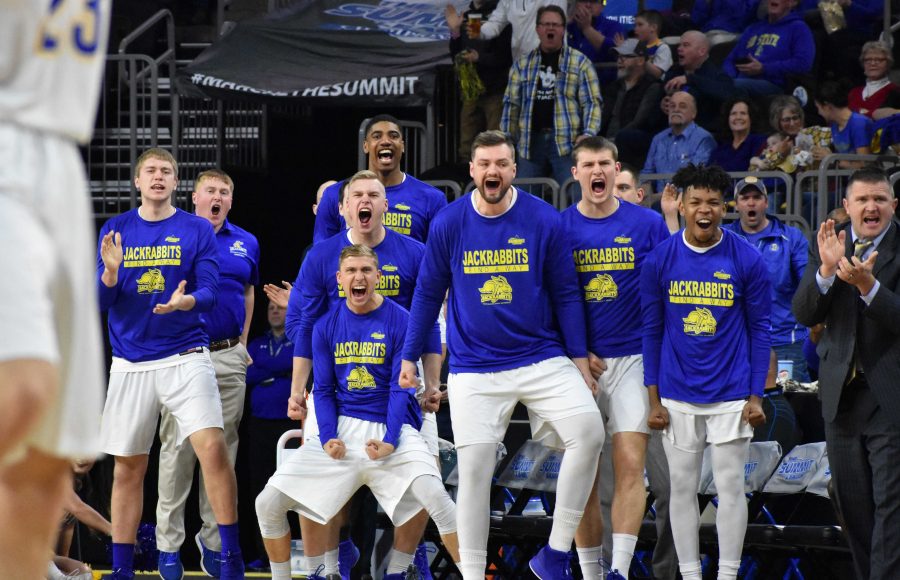 The Jacks celebrate a Tevin King (2) basket during the first half of the game against NDSU March 5. The Jacks beat the Bison 78-57. SDSU advances to the championship where they will face USD at 8 p.m. March 6 in the Denny Sanford Premier Center. By: Abby Fullenkamp

The first home game will come during an exhibition game against the South Dakota School of Mines on Nov. 1, 2018. The Jacks will also face off against Grand Canyon, Alabama State, Bemidji State and Florida Gulf Coast before playing in the 2018 Gulf Coast Showcase.

In Minnesota, the Jacks will play at the US Bank Stadium Basketball Classic. The Jacks will face off against Missouri Valley Conference foe, the Northern Iowa Panthers, on Dec. 1.

On Dec. 4, the Jacks will travel to Memphis, Tennessee to take on the Memphis Tigers.

The road will get tougher for the Jacks after the game. On Dec. 15, the Jacks will then travel to Reno, Nevada to take on the Nevada Wolf Pack, who are thought to be title contenders.

Sioux Falls will host the Summit League Tournament again this year and is scheduled for March 9-12.