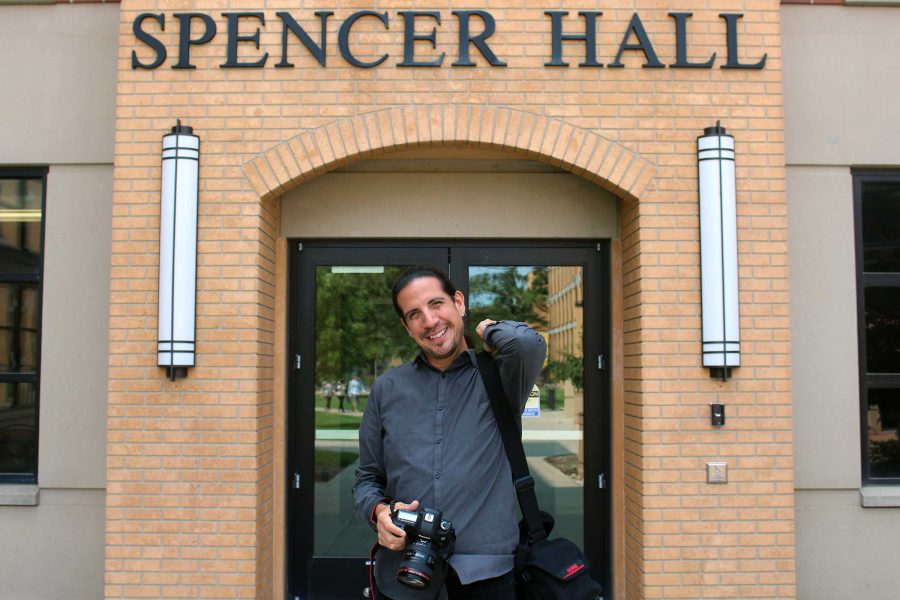 MIRANDA SAMPSON Frank Robertson, instructor at the School of Communication and Journalism, poses in front of Spencer Hall which is named after his late mother, Velva Lu Spencer, who was the Native American student adviser during her time on campus.

Frank Robertson is a second-year instructor at the School of Communication and Journalism. He grew up in the Brookings community, where his mother, Velva Lu Spencer attended SDSU and later went on to work for as the Native American student adviser. Robertson has worked primarily as a photojournalist, but also as an editor and SDSU’s university photographer. Outside of photography and photojournalism he trains for and competes in duathlons.

Q: Is it true that your mother is the “Spencer” of Spencer Hall?

A: “Yes. My mother was the Native American student adviser for many years and she helped a number of students, college students – including myself – navigate the waters of higher education. And she was building really strong relationships [with students] and she was a person of integrity … She was a great friend. It’s because of her that I got through my undergraduate … She was an important part of this campus for many people. And a very modest person … there’s no way she would’ve let a building go up in her honor while she was still alive … She was a modest, humble person. But I think it’s important that her accomplishments and her contributions to the campus – I think it’s important for her name to be there. For people to see that name and know her history … ”

Q: What does it mean to you to be back on a campus where you can walk by Spencer Hall and know it’s there for her?

A: “It’s fantastic, I stop by regularly. I mean when I was living in Ohio I still had family in Brookings and I’d come back a couple times a year and when I’d come back – I love this campus – and so I’d visit the campus and every time I came back to go visit campus I’d visit the Sylvan Green, take a look at the campanile and walk over to Spencer Hall. I’d take a picture, do a little bit of thinking and talking and it just means a lot to have that up there…She was a really good friend to me as well as being a fantastic mother. And so, I see her through her presence on this campus … It’s not so much for her honor, it’s for remembering the contributions that she made to the university and to the students. I grew up on this campus … She [Spencer] came to SDSU as a divorced mother of two boys who were in their early teens and raised them [Robertson and his brother] on this campus. It was nice to have that named and now my nephew – who had never met my mother – has a connection with this campus … ”

Q: How did you get into duathlons? What has that training been like for you?

“I started running about three years ago. And I’ve been a lifetime cyclist and about three years ago I thought I’d try running. And that didn’t go so well. The first time I ran, because I was a cyclist, I thought I could just do it, and I could hardly move the next day. So, I knew then I needed to take things slower … I competed in my first duathlon two years ago – crashed – had a dog run into my bike. Crashed, landed on my elbow. Rolled, tumbled, picked myself up, dusted myself off and kept riding … So, I fractured my elbow on my first duathlon. Fractured my elbow, picked myself up and still finished in first place …”

Q: What work or project are you most proud of?

“That’s a really tough question … You know, what I would show off would be something that I hadn’t made myself … As an editor, I had spent a career as a photojournalist, and in late 2007-2008 I was supervising the photo department [at the Chillicothe Gazette in Chillicothe, Ohio], but that also meant I had to put down my cameras and supervise two photographers and so, for the first time in my career, I put down my cameras, which was the foundation of my career, which was kind of scary. But, what I discovered was that the accomplishments of my photographers and my newsroom as a whole – when they succeeded through my help – their accomplishments were far more rewarding than anything I’d ever published myself … ”