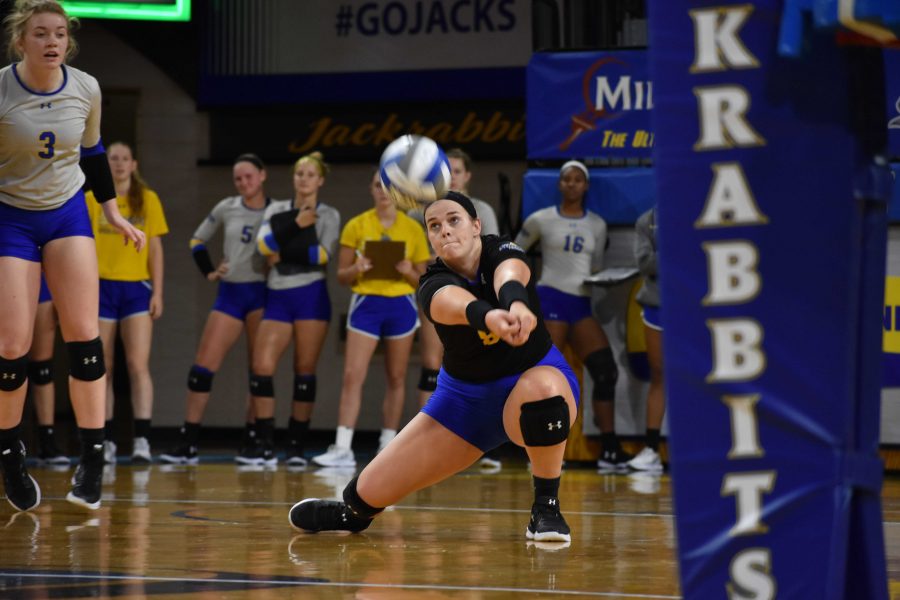 Head volleyball coach Nicole Cirillo is focusing on changing the culture and furthering the program’s progression in her fourth season as the head coach of the South Dakota State volleyball team.

In the past three seasons, the volleyball team has a combined record of 12-75.

They are hoping to turn that around this year as the team culture has undergone a makeover the past four years.

“We have worked extremely hard in changing the culture in every facet – except the academics, we have always had good students,” Cirillo said.

Over the summer the volleyball team was able to experience a program first.

The Jacks traveled to Italy on May 6, the day after graduation, where they played three different teams.

In Italy, the volleyball team was faced with a unique challenge: adapt to the different competition.

“We played a team with a 32-year-old and a 15-year-old on the same team,” Cirillo said. “It was an interesting dynamic.”

Another change in culture came after the Italy trip. The team started hanging around each other before the season started, according to Cirillo.

“My first year we were pretty cliquey, it’s getting that idea you’re always going to have a group you’re closer with but, is that your only group? Or are you able to branch out?” Cirillo said. “I think that’s a piece we are doing a great job with. Everybody enjoys everybody else.”

Throughout the summer, most of the players stayed around Brookings, according to Cirillo.

“It’s really helped eased the stress,” Cirillo said. “A lot of them had already been taught this is what we do, and this is how we do it.”

Cirillo is confident this team has the right mixture of youth and experience, despite losing standout Ellie Benson.

“Ellie really showed people that she worked hard and cared,” Cirillo said. “We have more of those players now than we ever had.”

Going into the 2018 season, the Jackrabbits will return seven of their players from last year.

For the returnees, the leaders will be two seniors and a junior.

“Mattison Munger, Sierra Peterson and Ashlynn Smith are kind of the leaders,” Cirillo said. “But, there’s not just one leader, we have multiple even besides the three I stated.”

The Jacks will have a team with varying experiences with seven of their players returning.

Six of the new players are incoming freshmen, while one is a transfer junior.

The new transfer student for the Jacks is Andrea Edwards, a middle blocker, from Long Beach City College.

According to Cirillo, three of the freshmen will be ready to make an instant impact.

“Crystal Burk, Sydney Andrews and Ellie Thein,” Cirillo said. “Those are the three that I can foresee jumping in right away and making a difference in some fashion and add that quality depth.”

In past years, depth is something that has been lacking throughout the season due to injuries.

“We are going to have solid players sitting on the bench, waiting for their opportunity, and that’s exciting,” Cirillo said.

The Jacks open their season on Friday, August 24 at the University of Missouri-Kansas City Invitational, where they will play UMKC, Austin Peay and Western Michigan. The first game is scheduled to start at 1 p.m. on Friday.

“Because we have a lot of newcomers it’s going to be really key to get them some experience, so I can put them in some of the situations I foresee them playing in our conference games,” Cirillo said.