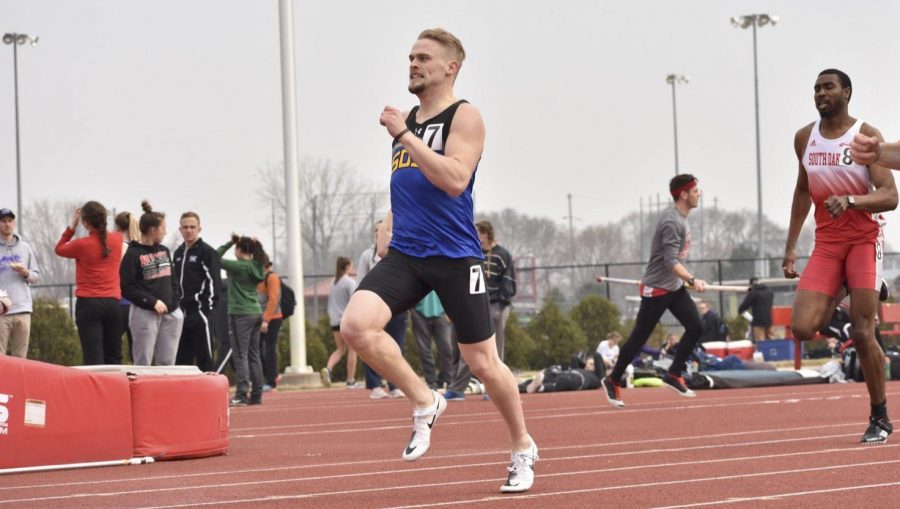 ABBY FULLENKAMP Junior Skyler Monaghan runs in the second heat of the men’s 400 meter dash during the South Dakota Invitational meet April 10 at the University of South Dakota in Vermillion.

SDSU’s men’s tennis team won their first and only match of the season April 20 when they defeated Augustana 5-2. The Jacks fell to Oral Roberts 5-2 April 21 and Denver 7-0 April 22.

The South Dakota State men’s and women’s track and field teams came away with 15 event victories April 20 at the Northern State Twilight in Aberdeen.

Junior Skyler Monaghan won the men’s 200-meter race and freshman Michael Schwinghamer won the 1,500-meter race. It was the first time each athlete had won the race in their career.

Sophomore Haley Mottinger won the 100-meter hurdle race and set a new personal record with a time of 14.73 seconds. It was also her first career victory in the event.

What’s next: The Jacks will participate in the April 25 Mount Marty Twilight in Yankton and the Drake Relays April 26 through 28 in Des Moines, Iowa.

The Jackrabbit women’s golf team finished the season at the Summit League Championships in Nebraska City, Nebraska. SDSU finished with a total score of 904 and came in third place. North Dakota State won the championship with a score of 888. opk

Sophomore Teresa Toscano tied for first at the end of the final round with Sophie Newlove of Denver and Natalie Roth of NDSU after they all finished with a 217. They plated a one hole playoff and Newlove par’d it, while Toscano and Roth got a bogey.

Senior Natcha Srimaneerungroj finished in 14th with a score of 230 and freshman Cassidy Laidlaw tied for 18th with a 235.

What’s next: This was the final tournament of the season for the Jacks. They finished in the top three in their final four tournaments.