Sophomore golfer strives to improve on, off the green 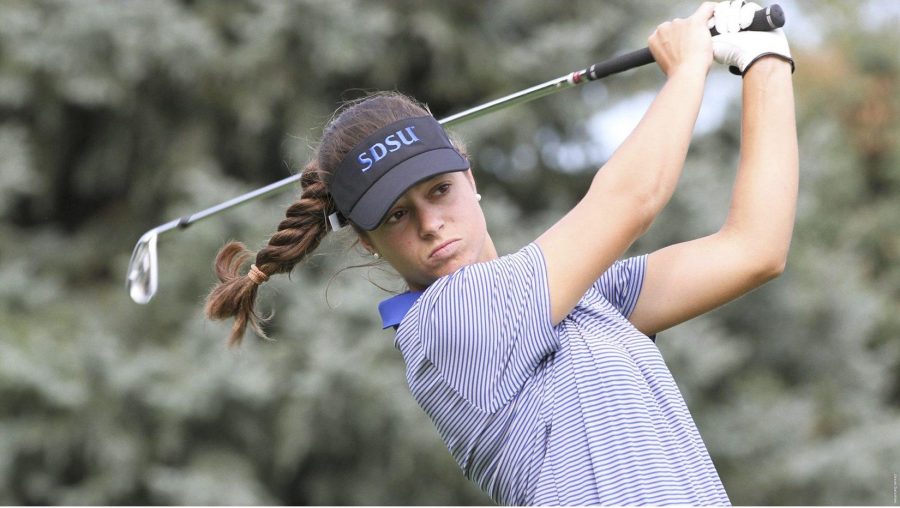 It is not easy for anyone to move from one country to another. Learning a new language, adapting to a different climate and being thousands of miles from family and friends are all challenges someone faces living in another region of the world.

The process gets more challenging if the international student expects to participate in a collegiate sport as a student athlete.

Sophomore Teresa Toscano has successfully transitioned from living in Huelva, Spain, to being one of the Summit League’s best golfers as a member of the South Dakota State women’s golf team.

“She’s been a big success story,” said head coach Casey VanDamme. “Her English was really poor when she got here and she really did well and took to the South Dakota State culture. The people here were so helpful to her in her first semester and without the culture, without Brookings and SDSU, I don’t know if she would have been as successful and confident.”

Toscano started playing golf when she was 6 years old and learned how to play the game from her father.

“It’s getting popular now, but it is still one of the smaller sports in Spain,” Toscano said.

VanDamme connected with Toscano’s golf coach in Spain in 2016 through mutual friends in the golf business.

“It all kind of happened real fast that June and by August she was here,” VanDamme said. “She had a lot of talent with her technique and power, so we were really lucky and excited for her to come here.”

Toscano was recently placed on the 2018 First-Team All-Summit League after topping her 2017 stats by shooting her career-best, and team-low, stroke average of 73.68. This was second overall in the conference.

VanDamme, who is in his fourth season with the Jackrabbits, said Toscano has adjusted and changed as a person since she first came to SDSU.

“She’s gotten better at every aspect,” he said. “I think when you are an international student, first when you come over to the states, there is a learning curve of just getting comfortable living in a different place, speaking a different language and we live in a different climate than what she is used to.”

VanDamme said Toscano has continued to improve her golf game as well.

“From the golf perspective, I think her technique has gotten better. Her mind and the way she approaches practice and the way she strategizes playing on the course all have improved,” he said.

The best is yet to come for Toscano, as she looks forward to her next two years as a Jackrabbit and prepares for a possible future playing professional golf.

“I’ve worked with LPGA players and she is every bit as good as them,” VanDamme said. “Here at South Dakota State, I think in the end, she will be one of the best players to play here. She is an elite player, but an even better person.”

In terms of the future, Toscano has many goals she hopes to achieve.

“I hope to keep improving my game as much as I can,” she said. “I hope to go pro someday. If I can make it in the United States, I will stay here.”

Toscano’s improvement was showcased Tuesday when she tied for second at the Summit League Championship in Nebraska City, Nebraska. She tied for third in 2017 and hopes to win the tournament next season.