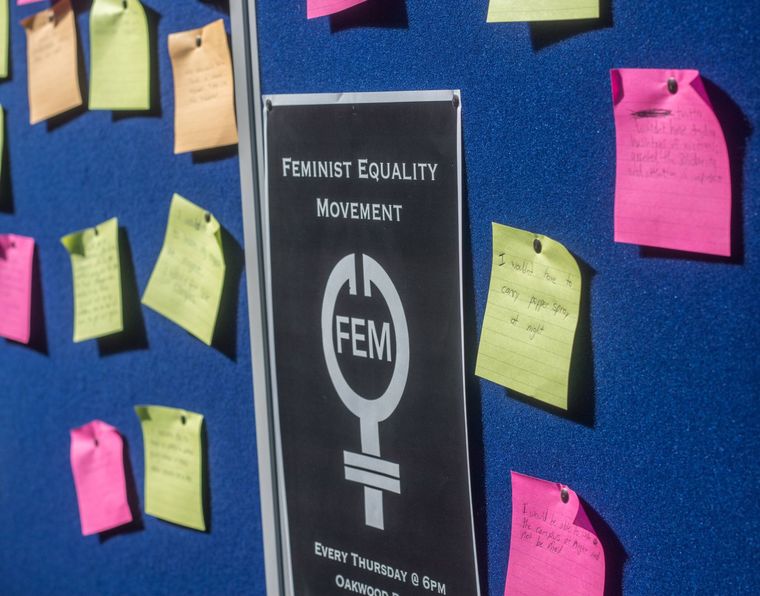 The Feminist Equality Movement at SDSU placed a bulletin board on Main Avenue in The Union and invited people to share their thoughts on what a world without sexual violence would look like.

Sexual assault is an intentional act.

It doesn’t matter if there was alcohol. It was a decision made by the perpetrator where they knew it was wrong, but they did it anyway, according to South Dakota State faculty, staff and administration officials who work closely with sexual assault.

“I think that they always know that it’s wrong, but their inhibitions are lowered so they justify it. Whereas if they were sober, they wouldn’t be able to justify it that way,” said Title IX Equal Opportunity Compliance Coordinator Michelle Johnson. “Their justifications to themselves are inaccurate justifications.”

Alcohol use is commonly associated with sexual assault on college campuses. This is because the use of alcohol creates a higher risk situation and can debilitate judgment.

A cocktail of alcohol, new freedom and parties create a “college culture” with increased risk of sexual assault. This leaves one in five female college students experiencing sexual assault and female students three times more at risk, according to Rape, Abuse, and Incest National Network (RAINN).

Not only is the increased risk theory of alcohol use one possibility behind sexual assault, there are other psychological and sociological theories as well. These include the need for power and control and men needing to prove their masculinity by accepting sex whenever available, according to Julie Yingling, assistant professor of criminal studies.

A lack of education also attributes to the commonness of sexual assaults on campus and in general, according to Tracy Chapman, part-time counselor on campus who also works at the Brookings Domestic Abuse Shelter.

“By the time you’re in college, those ideas have already been formed and it’s hard to undo that,” Chapman said. Counseling Services and Title IX have put programs together to educate incoming college students, but it’s not enough for Chapman.

Yingling hasn’t found any theories in her research of sexual violence that encapsulate why people commit sexual assault.

Alcohol is used to debilitate someone’s judgment and put their guard down, Yingling said. It’s typically used as an excuse and is a trend to perpetrate offenses.

But associating a victim’s assault with how much they drank perpetuates rape culture and victim blaming.

Besides the standard victim blaming through alcohol use and what the victim was wearing, Yingling said that even prevention attempts aimed solely at potential victims perpetuates rape culture. This includes telling potential victims to watch their drinks, track how much alcohol they drink or other safety measures to counteract sexual assault because it focuses on the victim and not the perpetrator.

Even if a person is being as cautious as they can, “no one is immune to sexual violence,” Yingling said.

“If students are out drinking too much, getting way too drunk — nothing’s wrong with that. It may be illegal, might be a bad choice, but that doesn’t mean it’s their fault for getting victimized,” Yingling said. “You should be able to be as drunk as you want, naked somewhere, and no one should touch your body.”

Victim blaming doesn’t just perpetuate rape culture by trivializing victims’ experiences, but it deters them from seeking help by shaming and guilting them, Chapman said. That makes them struggle with mental health disorders such as depression, anxiety and PTSD from the attack further.

“I think that speaks to how important it is to always believe the victim, always believe the survivor,” Chapman said. “Even if there was alcohol involved, because we want victims to continue seeking out the support that they need.”