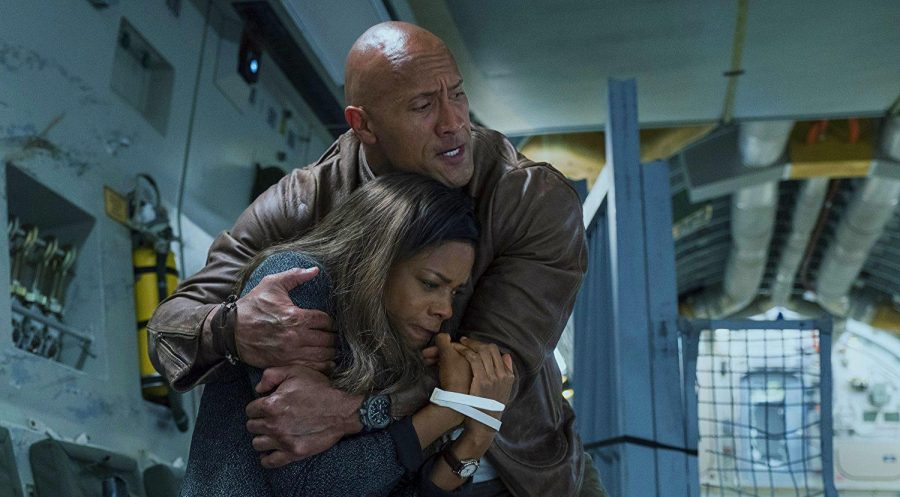 WARNER BROS. PICTURES Dwayne “The Rock” Johnson stars as a primatologist with an agenda in “Rampage.” The movie smashed through competition to take the number one spot for the weekend box office, outpacing fan favrite “A Quiet Place” with $35.9 million.

Hollywood is convinced video game movies will catch on.

You would think after video game adaptations like “Warcraft,” “Assassin’s Creed” and “Tomb Raider,” the industry suits would have learned their lesson by now: American audiences aren’t interested in these flicks.

But was “Rampage” the CGI crapfest other video game movies have been? Yes.

The problem with “Rampage” is it tries to take itself seriously, but at the same time tries to sell you on the idea of three giant animals fighting a primatologist being played by Dwayne “The Rock” Johnson. The movie is a paint-by-numbers plotline of an evil corporation thinking it can control something clearly beyond its understanding.

Only Johnson’s charisma saves this one. “Rampage” is at its best when it’s more grounded in reality and has his steady positivity to guide the film.

The movie opens with a disaster scene while a research space station quickly plummets toward earth.

Three canisters containing a test pathogen in the station are scattered across the U.S., conveniently finding their way to a wolf, an alligator and an albino gorilla named George (Jason Liles.)

George is a rescue animal in a zoo’s gorilla habitat overseen by primatologist Davis Okoye (Johnson.) It’s revealed Okoye saved George from poachers when he was a baby in one of the numerous subplots in this movie. Okoye nurtured a relationship with the gorilla, even taught him sign language.

But, of course, the pathogen makes George super-sized and super aggressive, which caused great alarm by Okoye.

What unfolds next is exactly what you’d expect There’s nothing new that pushes the envelope within the film. Even the subplot about genetic editing is given a back seat to CGI-fueled fun between Johnson and the giant alligator in the third act.

To his credit, Johnson is able to hold down this entire film on his own. Between his puns and ability to act against a green screen, he is the most appealing character on screen.

But to play devil’s advocate again, the gorilla in this film is rendered so successfully, every one of the sign language jokes plays fantastically. George seemed like a real character, a successful job on the part of the motion capture performer, the animators and The Rock.

Draw all the parallels to “King Kong” you want. George the gorilla was cute.

If you’re able to turn your mind away from the story and focus solely on the action (which isn’t hard,) this one’s for you. It’s a cheap popcorn flick, but it’ll get you through an otherwise boring Saturday afternoon.