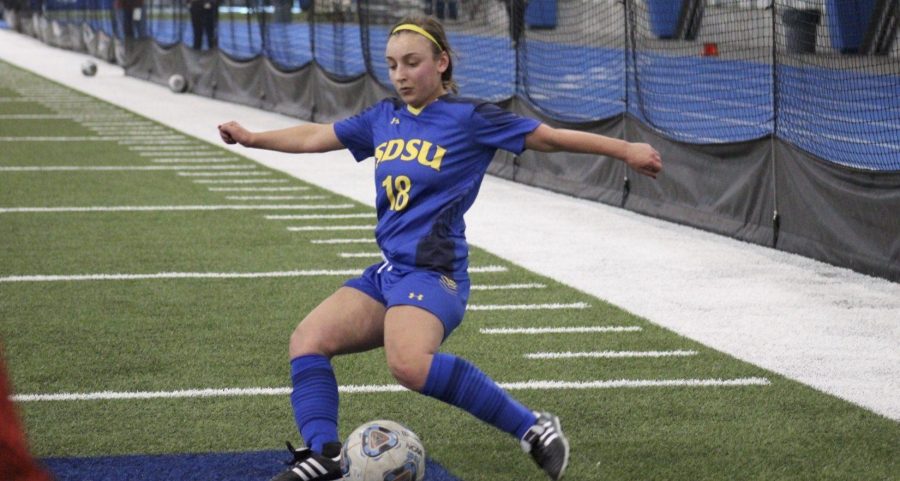 JENNY NGUYEN Redshirt freshman midfielder Stephanie Dashiell goes in for a cross during the NSU game April 7 in the SJAC. The Jacks will conclude their spring schedule by facing Iowa Sunday, April 15 in Iowa City.

It was a successful open to the 2018 season for the South Dakota State soccer team. Shutting out both of its opponents this weekend in two exhibition games at the Sanford Jackrabbit Athletic Complex.

The Jacks defeated the Southwest Minnesota State Mustangs 4-0 and the Northern State Wolves 2-0.

Head coach Brock Thompson said this game gave the Jacks an opportunity to cycle through their entire roster and give all its players a chance to get out on the field against competition.

The Jacks have been practicing indoors at the SJAC during the spring months due to inclement weather conditions.

“We are sure blessed with these facilities to play in,” Thompson said. “It’s a wonder what we did before them.”

Thompson said the springtime and indoor games are the first step in preparing for the new season.

“I think today was good from a development standpoint,” he said. “It’s great to see people get out there on the field, grab ahold of new roles, grow their game, and gain confidence to try new skills and new things. This is what we look for in our spring games.”

The Jacks lost four seniors at the end of the 2017 season, but have freshman coming in to replace them.

“We add seven new players this fall that will add a little bit of everything to our team,” he said. “Some will help us score goals, some will help us in the midfield. They are all great athletes and will make great Jackrabbits.”

SDSU will play its rescheduled match against Augustana at 6 p.m. April 11. The game is set to be played outdoors at Dana J. Dkyhouse Stadium with plans to move indoors to the SJAC if inconvenient weather conditions persist.

The Jacks will conclude their spring schedule at noon April 15 against Iowa in Iowa City.