Believe the hype: ‘A Quiet Place’ is a nail biter 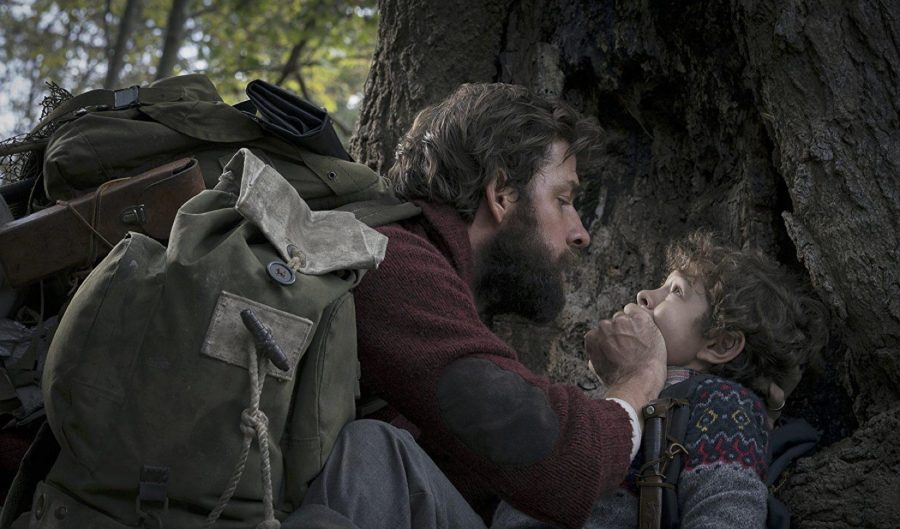 “A Quiet Place” opens in a small Midwestern-esque town in dead silence. No one’s been here for months. True to its title, this is a quiet place.

A family of five then fills the screen. There’s a sense of togetherness that exists beyond the words they sign to each other.

They all use American Sign Language. No one speaks a word. No explanation is offered for why the family isn’t speaking out loud.

They begin a walk home through a wooded area following a path of sand laid before them.

Suddenly, a toy space shuttle begins exploding with beeps and whistles. We look to one of the boys who is busily playing with the toy in his hands. We see a blurred creature crashing through the woods, heading straight for the boy. The father begins running to shield his son.

The scene cuts to black. A title fades in: “A Quiet Place.”

The premise of the film is this: an apocalyptic invasion overtakes the world, and the family is left hiding from terrifying creatures alone. These monsters appear to be completely blind. But, what they don’t have in sight they make up for tenfold in sound.

Like the title suggests, this film is quiet, but that doesn’t mean there isn’t a lot happening. The film is terrifyingly visual, so much so that I often found myself looking away from the screen.

If you’re looking for a horror flick, “A Quiet Place” is the best of the genre so far this year.

The creatures can hear a pin drop from a mile away and are extremely well armored. They can tear through a metal grain silo like a bullet through a piece of paper. Try raising three young kids in this world.

“A Quiet Place” is directed by Jim from “The Office” (who knew?), John Krasinski, who also plays the family’s father. As an actor, he’s phenomenal and as a director, well, the work shows. Krasinski does such an excellent job of showing how family life can imperfectly adapt to a life of silence.

Emily Blunt, Krasinski’s wife in real life, does an outstanding job as the mother in the film (just wait for the movie’s ending shot).

The young actress, Millicent Simmonds, plays the daughter, Regan, and does a wonderful job of acting purely through facial emotion, expression and sign language. A large part of her character arc has to do with a very particular hearing aid her father engineers for her.

On a more personal note, I didn’t remember until halfway through the film that the man I was sitting next to utilized a hearing aid similar to the one Regan uses in the film. When I got to talking about the film with him afterward, he mentioned how he teared up watching it.