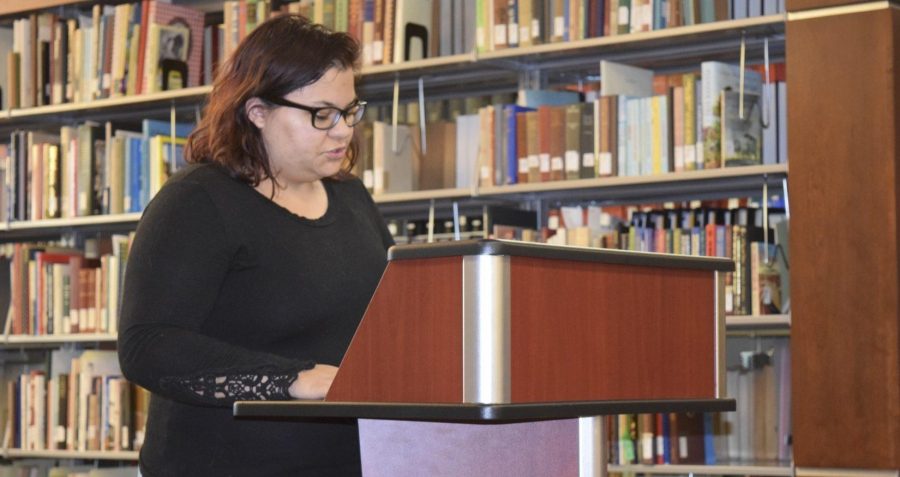 Oakwood is gearing up to publish its latest edition of the annual literary magazine, which features work by both SDSU students, artists and writers from the Great Plains region.

Students in all fields of study can submit work – whether it be art, short story or poetry – to the organization dedicated to not only filling the magazine with regional writing, but also featuring regional art.

Scislow didn’t know her work had been chosen for the cover of the magazine until a friend congratulated her after seeing one of the promotional posters for the launch.

To create the piece, she built up different layers and washes of paint before using other elements like wallcovering, metal and thread, which she often found while cleaning interior design labs in past internships, Scislow said.

“I enjoy being able to take something deemed as useless and incorporate it into something beautiful,” she said.

Scislow said she’s excited her work is representing this year’s Oakwood. She knows how important first impressions are, and hopes her piece encourages people to open the magazine and see all of the great work inside.

“I think it’s great that Oakwood accepts work from anyone who has ties to the Northern Great Plains region and is not limited to current residents or simply to students,” Scislow said.

Oakwood adviser Steven Wingate said anyone who has roots in South Dakota or any of its adjoining states is eligible to submit.

This year, Oakwood is publishing Brookings native Julie Wakeman-Linn’s short story “Shading a Line Gone Wrong.”  Wakeman-Linn is retired editor-in-chief of “The Potomac Review,” and she now writes full time from her home in Maryland.

Her niece, Ashley Wakeman, had her poem “Thoughts on an Orange” published in Oakwood in 2003, when she was an SDSU student. Wakeman-Linn said being published in the same magazine as her niece makes her even more proud of her story.

“She and I talk about writing almost every week,” Wakeman-Linn said. “When we discovered that now we are both Oakwood writers, we were both quite delighted.”

The literary journal was established in 1976 by former SDSU student Doug Cockrell and English professor David Evans under the name Calliope, which was later changed to Oakwood.

Cockrell and Evans wanted the magazine to represent more than just student artists and writers, but Wingate said it gradually strayed from their intention and started limiting submissions solely to SDSU students.

In 2017, Steven Wingate said he worked hard to broaden the range of authors and artists being published by reaching out to Wakeman-Linn and other professionals he thought would be interested in contributing. He hoped it would help return Oakwood to its’ creators intended purpose.

Oakwood continues to evolve, and is looking to increase its online presence to make the magazine more accessible to people in the region.

“The Northern Great Plains, as a region, has a ton of creative energy, a ton of creative people in it,” Wingate said. “I’d like people to feel that Oakwood is a place where that energy gets concentrated and expressed.”

Wingate anticipates there not being many more years of having a print version of the magazine. He doesn’t think “blanketing the world with physical copies” is the ideal way to approach publishing.

Wingate said it’s a big accomplishment for students who get published in the magazine because they will have competed against writers and artists who may have a lot more experience.

Wingate said making the issue more accessible will give Oakwood a broader audience, and ultimately more representation for its writers and artists in an area with such heavy concentration on the sciences.

Oakwood literary magazine is holding the launch event for its newest issue on at 7 p.m. Thursday, April 19 in the Briggs Library archives. The event is open to the public, free to attend and will include food, refreshments and readings from contributors.