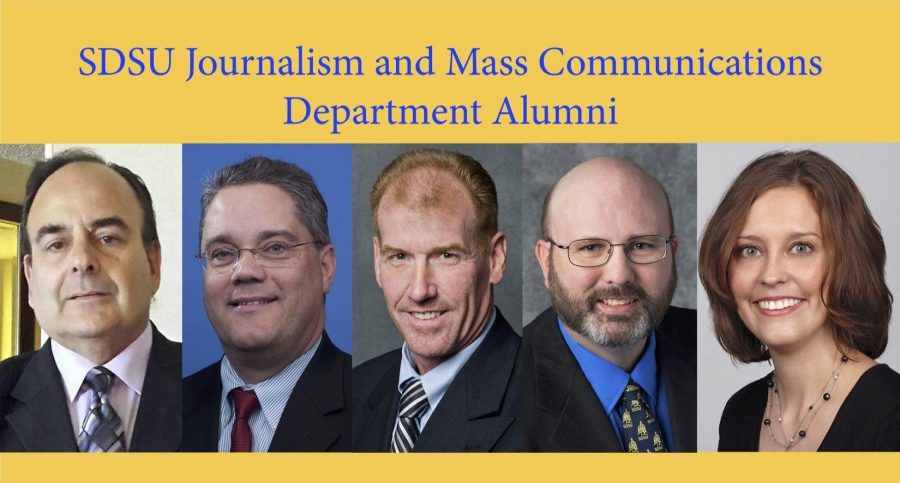 BROOKINGS, S.D. – April 4, 2018 – The South Dakota State University Department of Journalism and Mass Communication will honor graduates as distinguished alumni during its annual awards banquet April 18 at the Days Inn.

The evening also honors award and scholarship winners. Including this year’s class, department faculty members have now selected 145 individuals as distinguished alumni since 1985. This year, the list recognizes individuals who entered journalism and mass communication education after successful professional careers.

Michael “Mickey” Bugeja ’76
Bugeja came to SDSU to earn a master’s degree in journalism after completing a B.A. in German at Saint Peter’s College. A native of Lyndhurst, New Jersey, he also holds a doctorate in English from Oklahoma State University.

He worked as a state editor and national correspondent for United Press International. A professor and former director (2003-2017) of the Greenlee School of Journalism and Communication at Iowa State, Bugeja earned the 2015 Scripps Howard Award for Outstanding Administrator of the Year.

From 1986 to 2003, he was at Ohio University as a professor and associate director of the E.W. Scripps School of Journalism and special assistant to the president. Bugeja was also an associate professor at Oklahoma State.

A regular contributor to The Chronicle of Higher Education and Inside Higher Ed, Bugeja is a frequent source about media, technology and ethics. He serves on the Accrediting Council on Education in Journalism and Mass Communications.

Helland has taught many of the department’s writing courses, including basic newswriting, public affairs reporting, magazine writing and editing, sports writing and advanced reporting. He also has taught media law, editing, history of journalism, introduction to digital media and public relations in a university setting. He won the 2015-16 Teacher of the Year Award for the College of Arts and Sciences.

In addition to his teaching duties, Helland serves as one of the two advisers to the Journalism Club and works closely with professional media outlets across South Dakota.

He served as an adjunct professor at SDSU and Augustana University in Sioux Falls before starting full time at SDSU fall 2013.

Scott Reinardy ’87
Reinardy is the Malcolm Applegate Professor in News Management and Editing in the William Allen White School of Journalism and Mass Communications at the University of Kansas. He is also an associate dean for graduate studies and faculty development.

A native of Hampton, Minnesota, he earned bachelor’s degrees in journalism and history from SDSU in 1987 and accepted his first professional journalism position as a sports writer at the Aberdeen American News. Subsequently, he was an award-winning journalist for 15 years as a reporter and editor in news and sports at five daily newspapers before earning his doctorate in journalism from the University of Missouri in 2006.

Reinardy was an assistant professor at Ball State University before accepting a position at Kansas in 2008. His research examines newspaper newsroom organizations, particularly burnout, job satisfaction and workload of news workers. He has written two books: “The Essentials of Sports Reporting and Writing” and “Journalism’s Lost Generation: The Un-doing of U.S. Newspaper Newsrooms.”

He then worked as a broadcast journalism professor at Virginia Commonwealth University before returning to work as the online reporter for the Billings Gazette while also teaching at Montana State University–Billings.

Prior to returning to SDSU, he worked in public relations as the media relations manager for the HRDC Community Action Agency in Billings.

At SDSU, Dailey has received the Excellence in Online Teaching Award and the Van D. and Barbara B. Fishback Honors College Excellence in Faculty Engagement Award twice, the College of Arts and Sciences’ Outstanding Artist Award and the Fishback Honors College Advocate Award. He currently teaches and advises in the online Master of Mass Communication program, which has been recognized as SDSU’s outstanding online program for the past four years.

Michel Haigh ’99
Haigh, a native of Hitchcock, graduated from SDSU with degrees in agricultural communication and communication studies in 1999.

After SDSU, she earned a master’s degree in agricultural communications from Texas Tech before working as a writer/editor for the Oklahoma State University Division of Ag Sciences’ Cooperative Extension Service. She earned a doctorate in communication studies from the University of Oklahoma in 2006.

She joined the School of Journalism and Mass Communication at Texas State in July 2017 as a professor and graduate program adviser. She oversees curriculum, assessment and advises students.

Haigh was recognized as a Plank Fellow by The Plank Center for Leadership in Public Relations at the University of Alabama and was named to NerdScholar’s “40 under 40” list of “professors who inspire.” She frequently serves as a site-team member for the Accrediting Council on Education in Journalism and Mass Communication.