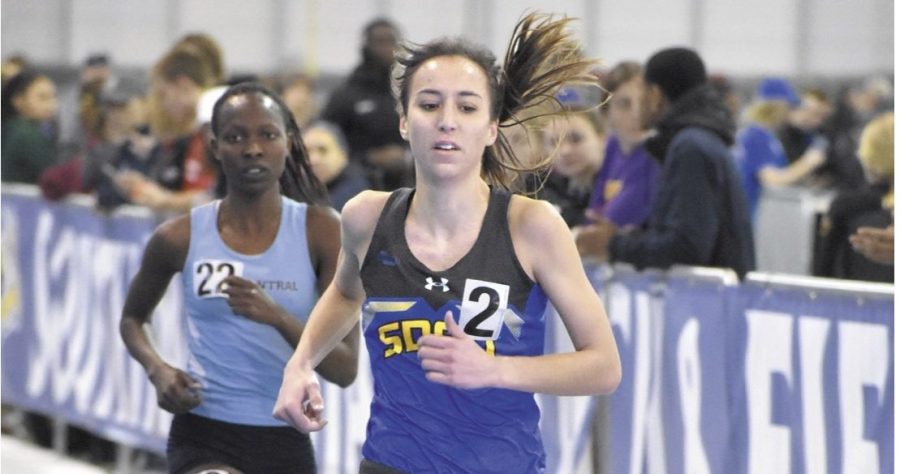 ABBY FULLENKAMP Junior Rachel King competes in the second heat of the women’s 5,000-meter run Feb. 10. The Jacks will travel to Vermillion for the Dakota Duals Saturday, April 7.

Equestrian
The No. 4 ranked South Dakota State equestrian team defeated No. 2 University of Tennessee at Martin March 31 in Dallas, Texas on a tiebreaker 8-8 (2,267.25-1,894) to take third place at the United Equestrian Conference Championship.

Sophomore Jessica Martinez had the only point in Equition over fences defeating Monika Zoromski 158-139.

What’s next: SDSU will travel to Waco, Texas, April 18 to participate in the National Collegiate Equestrian Association Championship.

Tennis
The Jackrabbit tennis teams were in action over the weekend. The men fell against Iowa 7-0, 6-0. The women lost against Western Illinois 6-1 and also fell to Denver and Oral Roberts 1-0.

Junior Morgan Brower won the lone point for SDSU against Western Illinois with a 4-6, 6-3, 10-4 decision. The teams are now a combined 0-29 on the season.

What’s next: Feb. 23 SDSU will head to Milwaukee, Wisconsin, to face Marquette, Milwaukee and Cardinal Stritch.

Track and Field
The SDSU men’s and women’s track and field teams participated in the Stanford Invitational in Stanford, California, and the San Francisco State Distance Carnival in Hayward, California, March 30 and 31.

On the men’s side, junior Kyle Burdick came in second in the 5,000-meter.

Junior Rachel King came in third in the 3,000-meter steeplechase. She set a school record with a time of 10:01. Sophomore Jaymie O’Connor came in first in the 100-meter hurdles with a time of 14.16 seconds.

What’s next: The men and women will travel to Vermillion April 7 for the Dakota Duals.