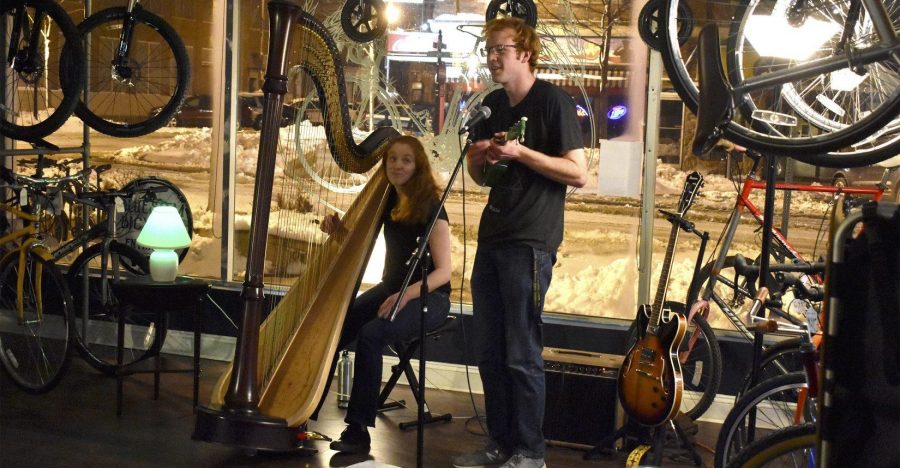 Bluestem is just one stop for the brother-sister duo. The two are always on the lookout for alternative performance venues in hopes of attracting more college-aged students.

“It gives us a chance to try out our music in front of a new group of people, while also bringing them into this really cool business here in Brookings,” Ann said.

In the past, they have performed at various venues around Sioux Falls and Minneapolis, like Kaladi’s Bistro and Hy-Vee.

The turnout was much bigger than either the Bluestem manager or the band had anticipated as community members and students alike piled into the bike shop and took spots on counters and the floor.

Evenson said he knows the value of having space and property for performances, and hosting shows is something Bluestem has wanted to do for a while.

“Mark reached out to me a few months back to ask about doing a show here,” he said. “We didn’t advertise for it at all, but if we do something like this again in the future we definitely will.”

Mark is a jazz guitarist and uses his love of poetry to write the lyrics for their songs.

Mark and his sister started playing shows together a few years ago, but have been collaborating all their lives.

Ann got her undergraduate and graduate degree in harp performance from the University of North Texas and University of Illinois. When she came home, she started working on original songs with her brother.

“We used to do a lot of random jam sessions when Ann would come back from school and we’d try to figure out what sounded good and what we didn’t like,” Mark said.

Mark and Ann said they’re bringing their music to Brookings to try connecting with an audience their own age to see if the younger generation likes their music.

There were remote-controlled light bulbs set up throughout the bike shop so the band could match the color of the room to the tone of the song.

“Mark’s a chill dude so a lot of what he writes is very indie, chill lyrics,” Ann said. “They’re the type of songs that you don’t know the meaning of but they make you think.”

Tuthill Balloon Club’s set list consists of 18 original songs, most of which were written by Mark.
Ann said she had one song on the setlist, and it’s easy to tell which is her’s because it sounds different than anything her brother writes.

Recent SDSU graduate Jalen Baldwin heard about the show from a friend and decided to check it out.
“I’ve never heard a harp played in concert before,” he said. “But it was awesome and I’d definitely come again if they have another concert.”

Bluestem doesn’t have any future shows planned right now, Evenson said but he is optimistic going forward after the success of Tuthill Balloon Club’s performance.