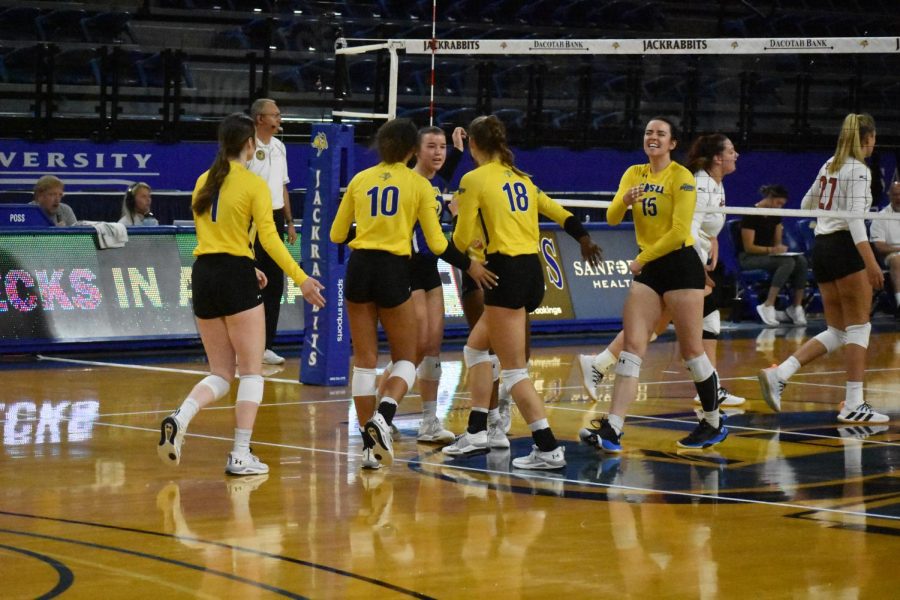 Crystal Burk winds up to spike the ball during the Eastern Washington game on Sept. 3. Picuted from left to right: Akeela Jefferson (10), Crystal Burke, Raegen Reilly (1) and Sydney Andrews (15).

The South Dakota State Volleyball team is on the road again this weekend as they participate in the Hawkeye Invitational in Iowa City Friday and Saturday.

The Jackrabbits (6-3) are continuing to get reps as they gear up for their conference schedule starting next week. They will play three games in 24 hours. They will first take on Iowa (3-5) and Northern Iowa (4-5) Friday afternoon at 12:30 and 4:30 p.m. respectively before facing North Florida (1-7) at 11 a.m. Saturday morning.

Iowa is coming off a 1-2 performance at the Cardinal & Gold Challenge in Ames, Iowa, last weekend. The Hawkeyes beat Wright State 3-2 in the first game on Friday before dropping the subsequent matches 1-3 against Iowa State and Drake.

“These non-conference tournaments are always fun,” coach Dan Georgalas said. “We’re really excited, not for one, or two, but three really quality opponents this weekend and I know our team is going to look forward to the challenge.”

Northern Iowa is coming fresh off three straight wins at its own UNI Tournament. They bested Western Michigan three sets to one on Friday before going on to sweep Southeast Missouri State 3-0 and outlasting Grand Canyon in five sets 3-2.

The Jacks will then take on North Florida to round out non-conference play this season. The Ospreys went 0-3 at the UAB Invitational last weekend winning only one set. They lost to Troy 1-3 after tying it at one set all in the second set. They then went on to drop eight straight sets to Troy, UAB and Auburn.

South Dakota State went 2-1 this past weekend at the Gamecock Classic in Jacksonville, Alabama. Sydney Andrews totaled a career high 14 kills and six blocks, both team highs, as she helped lead the Jacks to a 3-2 win over the Samford Bulldogs.

“This team is special. Out of all the years I’ve seen, this might be the closest we’ve ever been,” senior outside hitter, Akeela Jefferson, said. “We have our six seniors, so we have a lot of leadership. And we brought in these incoming freshmen and the sohphomores and made them family and we love each other.”

In the second game of the day, the Jackrabbits played Jacksonville State in which Crystal Burk led both teams in kills, with 12, and digs, with seven. Her efforts were not enough, however, as the Jacks dropped game two in three sets.

“Not very many people in this region know about that program, but very successful and undefeated still this season,” Georgalas said of Jacksonville State. “We wanted to elevate our schedule and Jacksonville State is a very high-quality mid-major program. We thought it was a really good road game for us.”

Coming back on Saturday to finish things out, the Jackrabbits looked to bounce back against Nicholls State. Raegen Reilly led both teams with 37 assists and coupled with Faith Saewert’s 14 digs and Burk’s 13 Kills led them past the Colonels three sets to one. Burk now has at least 10 kills in all nine matches this year as well as seven double-doubles.

You can catch the Jackrabbits taking on Iowa Friday at 12:30 p.m. on Big Ten Plus.