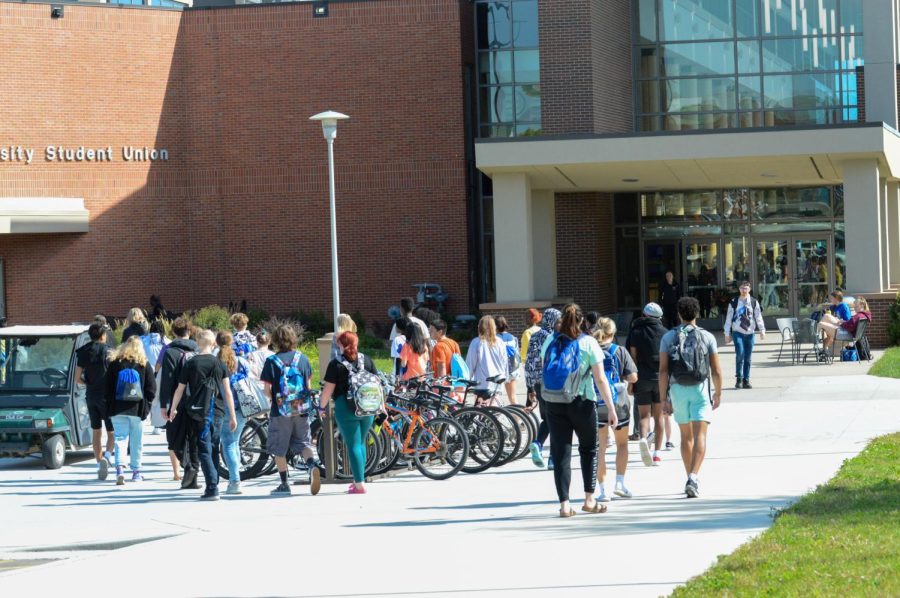 With an increase in the number of students living on campus, coupled with the closing of Pierson Hall this year for a renovation project, South Dakota State University officials scramble to make sure that all of the students have a place to stay.

Almost 4,000 students applied to live on campus this fall, up from 3,961 last year, according to Housing and Residential Life numbers. That increase, and the fact that Pierson Hall is closed for renovations until fall 2023, prompted officials to reopen overflow housing.

“It is certainly one of our most high-capacity years,” Douglas Wermedal, associate vice president for Student Affairs, said. “With Pierson Hall being closed for renovation, we are short about 300 beds that cannot be assigned to students.”

Rebecca Peterson, director of Housing and Residential Life, agreed. On top of increased enrollment, she said about 80% of the sophomore class returned to campus, which is more than usual.

“Our enrollment is up, which is really exciting,” Peterson said.

While this year’s housing situation has been a challenge for the university, housing shortages in the past have been more extreme than this year’s situation.

“We’ve had years where we were assigning students to dayrooms and lounges,” Wermedal said.

Despite the situation this year, neither Wermedal nor Peterson foresee the housing shortage to be a long-term problem. As Pierson Hall is reopened, housing capacity is expected to return to normal. Additionally, availability is expected to rise again come second semester as some students leave school, Peterson said.

“As spaces become available throughout other areas of campus, we’re working to move students to those spaces,” Peterson said.

In the meantime, Waneta Hall on the west side of campus has been reopened to accommodate students. Waneta was taken offline in 2021 and used as quarantine housing during the COVID-19 pandemic. Its full capacity is 320 residents, but it is currently single occupancy.

“Waneta is a building that was brought back online, so we have some students over there,” Peterson said.

In addition to the Waneta Hall situation, Hansen Hall was opened up to first-year students this fall. In recent years, it was primarily open for single-occupancy, second- and third-year students as needed.

While it is required by the Board of Regents that students live on campus for their first two years of school, a few exceptions are made by the university.

“There are a number of ways to be excused from living on campus,” Wermedal said. “The most common way is to demonstrate financial need.”

Some returning students are noticing the effects of what they say is increased on-campus activity.

Braden Frey, a sophomore with an entrepreneurial studies major, said two key places he thinks that have been affected by increased student numbers are the Miller Wellness Center and the Student Union.

“Both places are usually busy, but I’ve never seen them this packed before,” Frey said.

Besides the Wellness Center and the Student Union situations, Frey also said he thinks campus feels livelier than it has in the past.

Pierson Hall is set to reopen in fall 2023, with more residence halls to be renovated in the future.