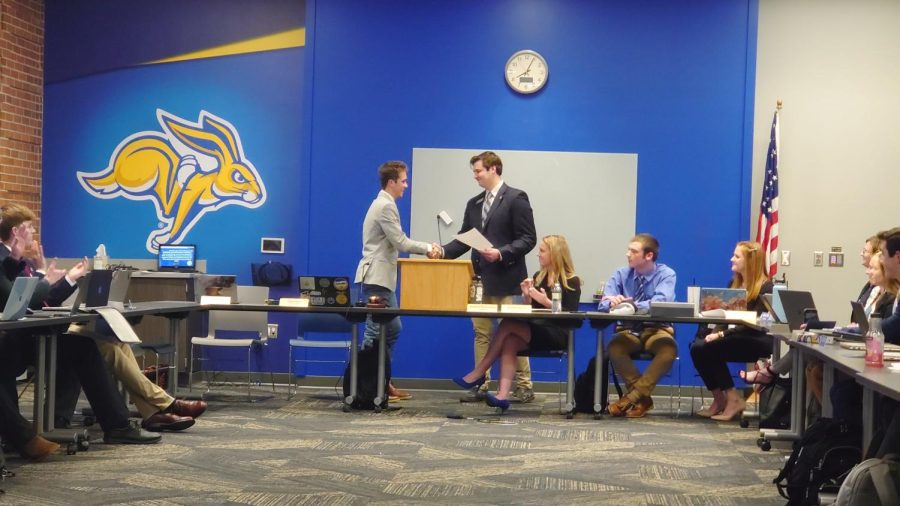 Koenecke, a former SDSU SA vice president and class of 1990 graduate, spoke to the Senate about being successful in government.

“The legislature moves more quickly than ever before,” Koenecke said. “People are already setting the agenda for the 2023 legislature. We’ve barely got the 2022 legislature in the books.”

If the SA waits until September to start planning the agenda for the 2022-2023 school year, it will be four months too late, Koenecke said.

Chief of Staff Blake Pulse asked Koenecke how we would respond to legislatures calling into question the amount of money SDSU is allocated for projects like new buildings.

Keonecke responded: “The reason why we get so much money is because we’re successful with it, and we turn it into even more success … We do things that are successful. We create successes across the state every day for so many people.”

SA President Andrew Rasmussen presented two Campus Partner of the Year awards. Angie Courteau, a secretary in the Student Union, and Lisa Hager, assistant professor of political science, both received awards this week after not being able to attend last week’s SA meeting. During the April 4 meeting, Rasmussen presented awards to School of Communications and Journalism advisor Erica Quam and Ness School of Management and Economics professor Gerald Wang.

The Senate unanimously passed Amendment 21-11-A, which creates a diversity liaison position within the Senate. The new position will work with ex-officios and give student groups like the Black Student Alliance, Latin American Student Association and Gender & Sexuality Alliance a single vote in the Senate.

The Senate also unanimously passed Amendment 21-12-A, which removes the office assistant position from the bylaws. The position has been sitting vacant for two years.

“I’m really proud of the work that everyone was able to accomplish this past year,” Rasmussen said to the Senate. “I want to thank the executive team for their work this past year keeping the Senate on track and moving forward …  and also to the Collegian staff for keeping me on the seven o’clock start time.”

The Collegian staff wishes the new administration well and outgoing SA members the best of luck in their next endeavors.