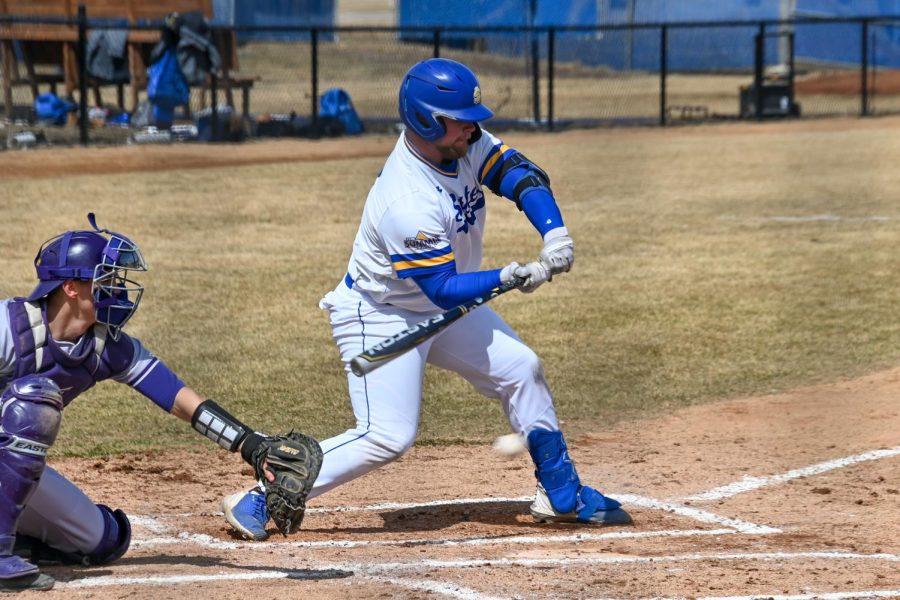 South Dakota State infielder Dawson Parry swings for the ball in a Summit League baseball game Saturday against Western Illinois. In Sunday’s game against the Leathernecks, Parry was one of four Jackrabbits to homer in the game, a grand slam in the seventh inning, as the Jacks exploded for 12 runs.

​​The South Dakota State baseball team won two of three games in their home-opening series with Western Illinois, capped off with a 12-1 seven-inning victory at Erv Huether Field.

The Jacks played a doubleheader Saturday and split the two games before cruising to their 11-run victory Sunday.

The Western Illinois series comes after the Jacks got their first series sweep of the season over St. Thomas April 2 and 3.

After that, SDSU had a game scheduled against Dakota Wesleyan in what was originally going to be their home-opener, but the game was postponed because of inclement weather.

After their disappointing loss to the Leathernecks, the Jacks ended the series on an explosive note, smashing four home runs and scoring 12 runs.

The first came in the first inning off the bat of second baseman Jordan Sagedahl, a solo shot to center field to put the Jacks ahead 1-0.

The next player that went yard was junior outfielder Jamie Berg, who hit his first Division I home run with a two-run blast to right field during the sixth inning.

“I feel great,” Berg said about his home run. “There is not much of a better feeling than that.”

The Jacks would then score four runs in the sixth inning, highlighted by a solo home run from catcher Ryan McDonald to extend SDSU’s lead. Then, first baseman Dawson Parry hit a grand slam to cap off a seven-run seventh inning and make the final score 12-1.

“We got a lot of guys with a ton of pop and, one through nine, all of us can definitely hit the ball over the fence,” Parry said, “Days like this are just going to happen.”

The Jackrabbits’ defense also performed very well in this game as they held the Leatherbacks to one run despite Western Illinois leading off four of their seven innings with a hit. Strong performances from Ira, McDonald and starting pitcher Owen Bishop exemplified SDSU’s defense.

“(McDonald) behind the plate threw out two guys today and Ira made a great play yesterday and another great play today,” coach Rob Bishop, said.

With this win, the Jacks now move into fourth place in the Summit League with a conference record of 5-4 and an overall record of 11-16.

SDSU spent the first 18 games of their season on the road against non-conference opponents like Purdue and Wichita State. They finished that stretch with a record of 6-12.

The Jackrabbits opened their conference season in Tulsa against Oral Roberts. They lost all three games of the series but bounced back with their sweep of Summit League newcomers St. Thomas in Minnesota.

“I think we’re trending up,” Rob Bishop said, “The first two weekends on the road we faced some good opponents and we bumped into some adversity with injuries and some other things, but I do feel like we have recovered and caught our breath and that we are playing better baseball. The version you saw (Sunday), that version is in us we, just need to fight to be more consistent.”

SDSU’s next game, scheduled for Tuesday against Northwestern (Iowa) was canceled because of weather. They will be traveling to Greeley, Colorado,    to face the Bears of Northern Colorado in a three-game conference series Friday-Sunday.

The Jacks will return to Erv Huether Field April 29 when they take on North Dakota State in a three-game series.