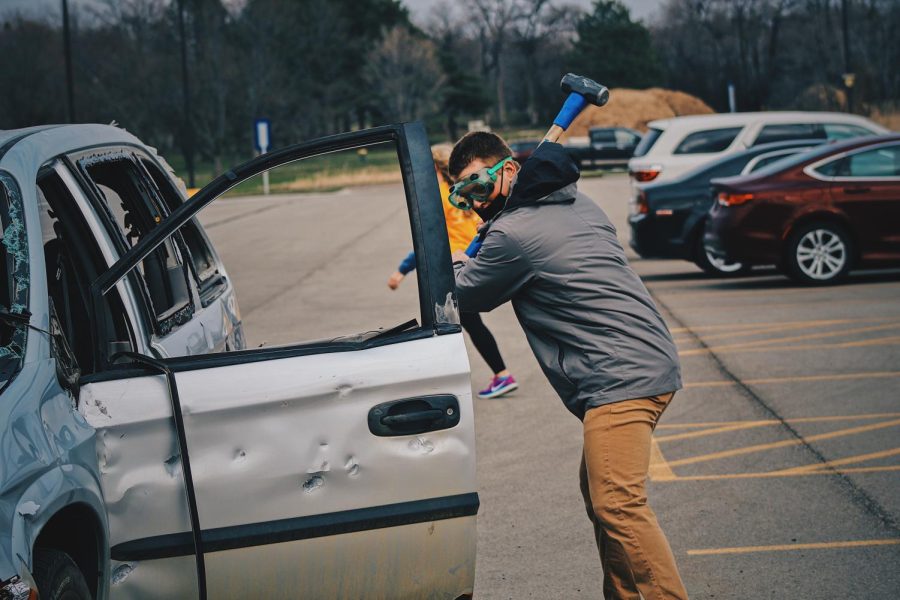 One past State A Thon fundraiser had students pay a fee to smash a donated car.

The South Dakota State University’s State A Thon event is this Saturday, and the organization hopes to raise $150,000 for Children’s Miracle Network. The check-in begins at 9 a.m. for the annual 11-hour dance marathon in the Volstorff Ballroom and will end at 8 p.m.

“Be prepared to have fun,” said Alissa Findley, State A Thon overall coordinator.

This year’s event has a carnival theme titled, “A Million Miracle.” Participants will be taught a “morale dance,” which is performed each hour. In addition, they will play mini-games and hear stories told by Miracle families.

Findley said the event is a good way to get involved on campus while doing something positive for the community.

“I dance because I want the kids to have the childhood they deserve,” Bryn Boyken, senior human biology major, said.

Boyken is a morale leader for State A Thon. Her duty is to motivate her fundraising team to raise money and to be involved in fundraising events. She also helps create the morale dance and gets to work hands-on with some of the Miracle families that will be participating at the event.

SDSU’s State A Thon is a standalone student organization that started in 2001. According to the organization’s Instagram account, SDSU State A Thon has raised a total of almost $1.5 million since its start.

For the past four years, Matilyn Kerr, SDSU program adviser for university traditions, has been the “boots-on-the-ground adviser” for the event. She has been involved in State A Thon since she was an undergraduate student in 2012.

“Your involvement can totally be what you want it to be,” Kerr said.

She said coming to the event is the best way to see the effect it has on the Miracle children, the community and Children’s Miracle Network.