Jackrabbits look ahead after WNIT success 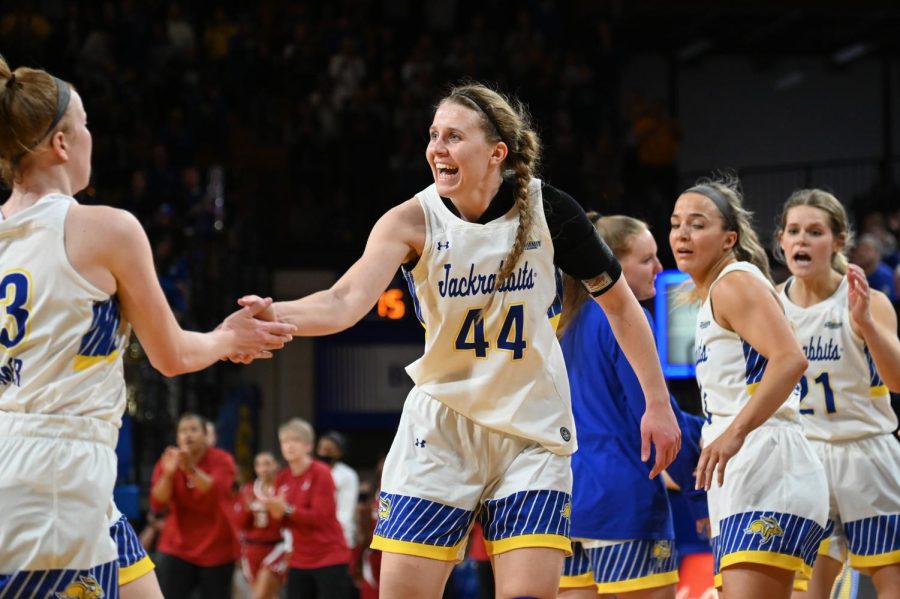 South Dakota State’s Myah Selland (44) celebrates after a play with teammate Haleigh Timmer (13) in the Jacks’ WNIT game against Alabama Mar. 27 at Frost Arena. Both Selland and Timmer were named to the WNIT All-Tournament team. The duo will be back next season.

Not many basketball teams get to end their season with a win. Let alone at home. That is what the South Dakota State University women’s basketball team did Sunday afternoon when they won the WNIT championship game in dominating fashion over Seton Hall. It was the perfect ending to a season that had many ups and downs and was capped off by winning six straight games in the WNIT Tournament to claim the title.

After losing to USD in the championship game of the Summit League Tournament, the Jackrabbits were hoping to keep their season alive in any way possible. But they did not get an at-large bid to the NCAA Tournament. Since they finished first in the conference, they received an automatic bid to the WNIT.

After convincing wins over Ohio, Minnesota and Drake the Jacks started to face some tougher competition as they got deeper into the tournament. Their game with Alabama saw both teams go on huge runs to each take double-digit leads before the Jacks pulled away in the fourth quarter. Then they had a tight contest with UCLA and were able to squeak by. Finally, in the title game, the Pirates never stood a chance as they got out to a 25-7 lead after the first quarter before winning 82-50. All six of their games were played at Frost Arena.

“You can’t really write it any better,” Myah Selland said. “We got to stay at home and do it in front of Jackrabbit nation, that’s been great all year, and got bigger and better this tournament. To send our seniors out with a win, not many teams get to do that, and to do it at home is even better.”

For the Jacks’ four seniors, Tylee Irwin, Haley Greer, Addison Hirschman and Lauren Rongisch, they get to end their careers at SDSU with a national championship. Irwin leaves a lasting legacy on the program and became the all-time leader in games played earlier in the season, passing Macy Miller’s previous mark of 144 games played. She finished the season with 159 under her belt.

“I’m happy for all of our seniors,” coach Aaron Johnston said. “Tylee has had such a huge impact on our program for five years now. She’s started a ton of games, been in a lot of big games, battled through injury, tough losses and big wins. She’s been about as consistent as a person and a teammate as anybody could ever expect or hope for. It’ll be a big hole losing Tylee; her role is incredibly undervalued.”

The team went through a lot of adversity during the season that many didn’t see coming. At the end of their non-conference schedule, SDSU held a 4-7 record. The team only lost four games, all last season in 25 games with most of the roster coming back. Selland was in and out of the lineup at the start as well, so it was hard for the team to find a rhythm, according to Johnston.

They then went on to run through the Summit League, going 17-1 in their conference schedule and earned the top overall seed in the conference tournament before falling to the Coyotes. SDSU wasn’t the only team that had a successful postseason run as USD advanced to the Sweet 16 of the NCAA Tournament for the first time.

“I think we’ve had really great publicity for our league,” Irwin said. “In year’s past, those two teams have done really well on the national stage and obviously that recognition is good for the Summit League too.”

SDSU finished its season 29-9, winning 26 of its last 28 games and carrying a 16-game home win streak into next year.

After the successful postseason run, it begs the question if the Jackrabbits should have been given an opportunity in the NCAA Tournament. Regardless, they will be able to get the chance to prove themselves next season.

The Jacks will be bringing back most of their talent, including leading scorer and WNIT MVP, Selland. Other notable names include Paiton Burckhard, Tori Nelson and the freshman that came alive in the WNIT, Haleigh Timmer. Timmer was selected to the WNIT All-Tournament team along with Selland.

“Timmer’s been great for us this postseason,” Selland said. “Obviously she’s stepped into that starting role and that’s really tough and to do it on the stage she did it at was great. She’s fearless, she makes plays for us, she’s been doing it all year, but especially here in the postseason.”

Johnston thinks that Timmer’s success in the postseason was greatly due to him giving her the opportunity to shine by putting her in the starting lineup when the tournament started. He thinks that her success will be a “great springboard for her going forward” and is “excited to see where she takes it from here.”

Lindsey Theuninck announced via Instagram Tuesday that she will not be returning for her extra year of eligibility after spending five years with the program.

Paige Meyer was the other true freshman on the team that showed success during the season and will be a big piece moving forward. She started in all 29 games she played in before getting injured in their game against Kansas City Feb. 26.

The fan aspect was a huge part of the Jacks’ postseason run and they were able to get plenty of national attention, after playing the first nationally televised women’s basketball game at Frost Arena. The Jackrabbits had attendance increase every game in the WNIT and their final two games were in front of sold-out crowds with 5,263 in attendance against Seton Hall.

Irwin was thankful for the opportunity to play in front of a community that supports the school the way it did over the course of the season.

“In these postseason tournaments, there’s been a lot of controversy on viewership and women’s basketball as a whole,” Irwin said. “I think it’s really special for everyone to see the women’s basketball that we get to be a part of at South Dakota State that not a lot of programs are fortunate enough to have.”