What’s next for Wilson? 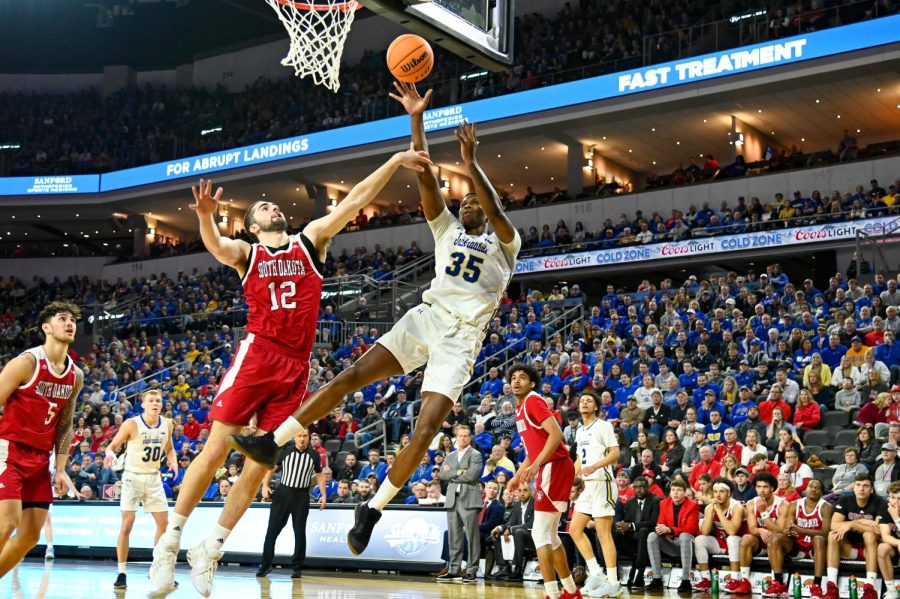 South Dakota State basketball star Douglas Wilson ended his Jackrabbit career last month as the team fell to Providence in the first round of the NCAA Tournament.

But that doesn’t necessarily mean the 6-foot-7, 220-pound Des Moines native is finished with basketball for good.

Wilson is hoping to make it to the next level, which could mean overseas, in the NBA G League – or even the NBA.

“We have talked and are still evaluating his options, but he will definitely get a shot to showcase his skills if he gets a workout in the NBA,” SDSU coach Eric Henderson said.

Because Wilson is not seen as a top-60 prospect, he won’t know for several weeks if he will be granted an NBA workout, said NBAdraftroom.com. Such a workout could help him get noticed by pro teams.

When it comes to the next level, Wilson is seen by some analysts as undersized for the power forward position. He hopes to make up for that with his demanding work ethic. Wilson’s game could also translate to playing on the wing if his jump shot improves, as well as his ball-handling, according to NBAdraftroom.com.

None of that necessarily bothers Wilson, who says he is most proud of “overcoming expectations.”

Henderson said that no matter what comes next, he is “just really proud of Douglas Wilson. He is an irreplaceable player and will be missed throughout this whole program.”

No matter what comes next, Wilson said he wants Jackrabbit fans to know that he is grateful for the support he received during his time in Brookings. He wants to be remembered as “someone who gave it all for them every game, be the best person he could be every day, and was the hardest worker in the gym every day.”

The Jackrabbits will have a tough job replacing Wilson. The team won a total of 68 games during his three-year career here. That includes a 30-4 mark this season with the March Madness appearance.

Wilson arrived on the South Dakota State campus in summer 2019 and got right to work. Coaches and players knew he would make an instant impact in his first season.

That year, he averaged 18.6 points a game and grabbed 6.4 rebounds as well. This success was noticed by other coaches around the league, and he earned Summit League Player of the Year, as well as Newcomer of the Year honors.

Henderson describes Wilson as a “dynamic personality.” He added that his maturity made him a leader who could “connect” with his teammates.

Wilson’s second season was slowed by a variety of injuries that allowed him to play in only 19 games. Despite being hurt, Wilson was able to flash some of the same abilities that he did in the previous season. Throwing down dunks and getting to the rim proved to be Wilson’s strengths, and this style also made him a fan favorite.

During that second season, Wilson averaged 16.8 points and 5.4 rebounds a game.

The pandemic gave the former Kirkwood Community College and Hoover High School product another year of eligibility, which came as welcome news for the Jacks and their fans.

So, the Jackrabbits and Wilson were poised to do big things during the 2021-22 season, and that is exactly what they did. The team made history by registering the only undefeated season in Summit League history at 18-0. Wilson finished the year averaging 16.4 points and 5.5 rebounds a game.