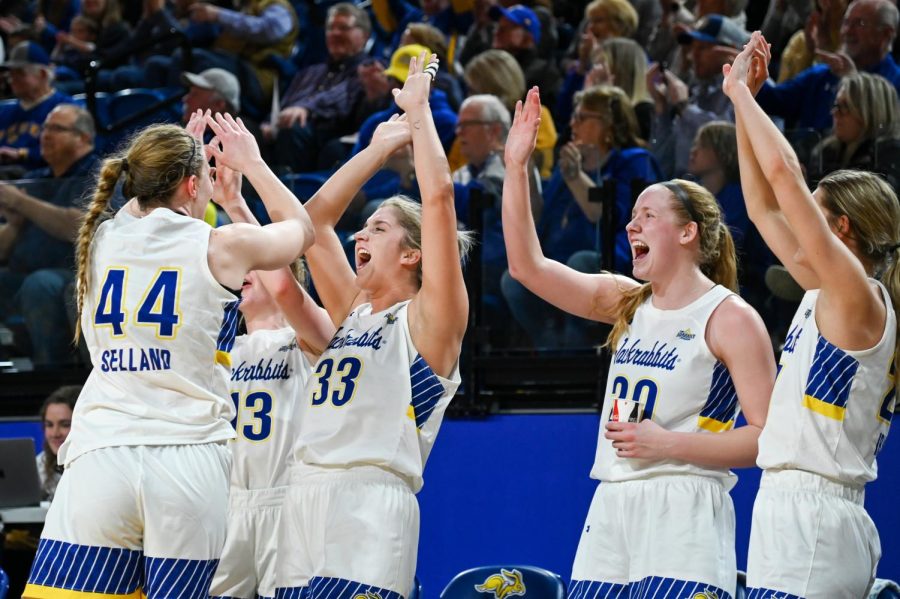 The Jackrabbits cheer after a hard-fought victory over Alabama Sunday night in the quarterfinal round of the WNIT. The Jacks won in front of 4,268 fans at Frost Arena. This crowd was the largest for a women's game in six years.

The SDSU Women’s basketball team had another exciting finish as they defeated the Alabama Crimson Tide 78-73 in Frost Arena Sunday night.

Tylee Irwin came up with a clutch steal and Lindsey Theuninck hit a game-clinching three in the final minute of the game to advance the Jacks to the WNIT Semifinal game.

“I think everybody is happy for Lindsey, she is such a great teammate, great Jackrabbit, and she’s doing good things to help us right now,” coach Aaron Johnston said.

SDSU started the game on fire, hitting five 3-pointers in the first quarter and taking a 26-11 lead after the opening 10 minutes.

Alabama went on a run themselves in the second quarter, outscoring SDSU 19-6 to start, cutting the Jacks lead to just two. SDSU responded with a 12-0 run right before halftime to go up 44-30 at the break. Paiton Burckhard led with 10 points along with Myah Selland who had nine points, five rebounds and four assists.

The third quarter was all Alabama as they outscored SDSU 34-12 behind Brittany Davis who scored 16 points of her 28 total points in the quarter. The Crimson Tide made 6 3-pointers as they took a 64-56 lead going into the 4th quarter.

Alabama pushed the lead to 10 to start the 4th but the Jacks fought back and went on a 14-0 run to take the lead, 70-66. Alabama was held scoreless for nearly 5 minutes in the quarter. Theuninck drained two 3-pointers in the final two minutes to seal the win.

“I’m not even sure I looked at the rim, I just threw it up there and said a prayer,” Theuninck said after she hit the game-sealing three to win.

Haleigh Timmer led the Jacks in scoring with 17 points, with nine coming in the fourth quarter. Burckhard posted her first double-double of the year with 14 points and 10 rebounds. Selland had 13 points, 7 rebounds, and 6 assists.

Theuninck posted a career-high 14 points and shot 4-for-4 from beyond the arc.

SDSU will return to Frost Arena on Thursday night as they host UCLA at 7 p.m. in the semifinal round of the WNIT.