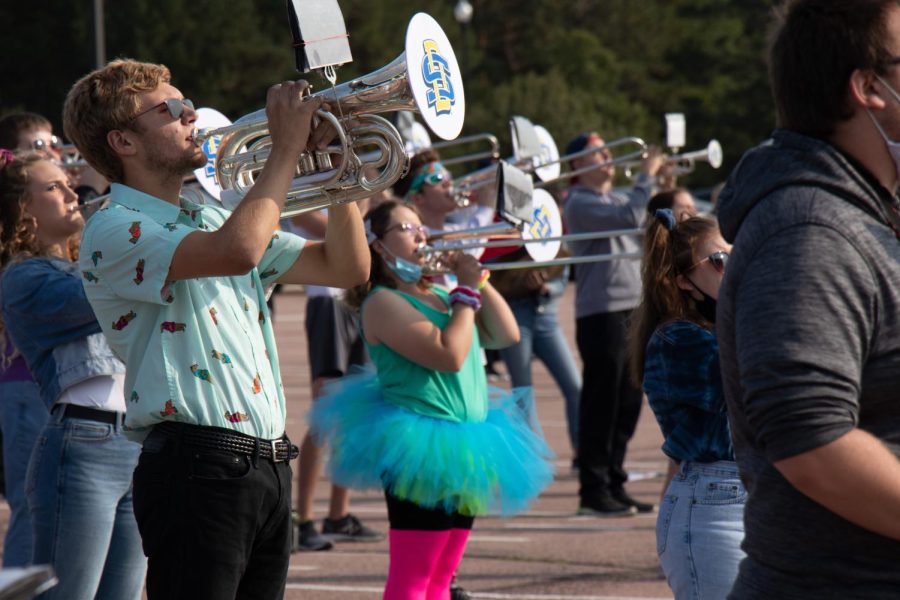 South Dakota State University officials are working to create endowments that would help pay for some of the university’s most high-profile traditions like Hobo Day, Little I and The Pride of the Dakotas Marching Band.

University officials think these well-known traditions are underfunded and need more money to be more effective. The endowments come from the Bold & Blue initiative announced last fall that aims to raise $500 million.

SDSU Foundation President and CEO Steve Erpenbach said the traditions are “under-resourced financially.” For example purposes, Erpenbach said a $1 million endowment would generate $40,000 a year for a specific tradition.

“The big benefit is sustainability as it’s there every year,” Erpenbach said. “A group could count on that every year.”

A potential drawback for endowments is the financial markets and how they can affect interest rates.

“The market does create some volatility sometimes,” said Michaela Willis, vice president of Student Affairs and Enrollment Management.  “Overall, you’re always going to have dollars coming out of it to help you with that organization.”

The Hobo Day Committee spends close to the whole year planning for one week, and Matilyn Kerr, adviser to the committee and an alumna of the group, couldn’t be more excited for a potential endowment.

Kerr said that since the Hobo Day Committee was revitalized in 2013, they’ve always had to “scrape together” money to create the Hobo Day atmosphere. She said from 2016-2018, the committee was getting about $6,000 annually from the Students’ Association.

According to Kerr, in 2019, they were given only $1,000 from SA, and that opened up the idea for fundraising for Hobo Day. Kerr said the Hobo Day spirit had become, “We make do with what we can,” and internally the quality of what they have wanted to do with homecoming events has never met what they’ve wanted to do from a resources perspective, like time and money. Last Hobo Day, they were given a total of about $28,000 through fundraising and SA money.

“If we had an endowment, we would be able to do things with our university homecoming program that we have dreamed about doing for decades,” Kerr said.

Little I was given $8,000 by the Students’ Association in 2021, and the event has had decent funding through donations in recent years. But, they could always use more, according to Gullickson.

“We would be able to offer more scholarships to high school students, as well as collegiate students competing during the two-day event,” Gullickson said.  “We want to provide a great experience to anyone that is competing or watching, and an endowment would play a big part in that.”

The Pride of the Dakotas is one of the oldest traditions at SDSU and relies on the School of Performing Arts and One Day for State for funding.

The band is expecting about 300 members for the fall 2022 season, and it costs $6,000 to $7,000 just to feed the Pride, according to David Reynolds, director of the School of Performing Arts.

“It costs a lot of money, and expenses like that can’t be paid for through university funds or GAF fees,” Reynolds said.  “Raising money so that students are fed when they are out representing the university is a good reason to have an endowment.”

The Pride tries to go to a big event every four years, but students have to cover part of the cost of the big trips. Reynolds said because of the extra student costs, they don’t get to travel as much as they would like to.

What benefits the Pride is the history of success and reputation the band has established, and Reynolds knows support would be big enough for an endowment.

“We’ve had incredible support from alumni of not only the Pride but of the university folks that are aware of how important the band is to the campus climate,” Reynolds said.  “We continue to be very thankful for all that support we receive.”