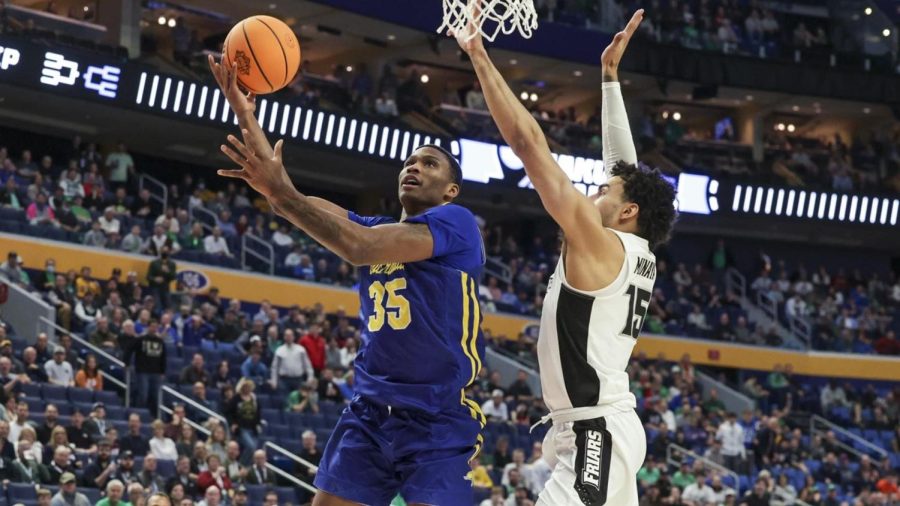 Jacks forward Douglas Wilson goes for a layup on Providence's Justin Minaya in a first-round NCAA Tournament game Thursday. Wilson scored 13 points in the final game of his Jackrabbit career as his team suffered a 66-57 loss to the Friars.

South Dakota State’s historic season came to an end Thursday, as their upset bid fell short against Providence in the first round of the NCAA Tournament at KeyBank Center in Buffalo.

“Tip of the cap to coach [Ed] Cooley and his team,” Jacks coach Eric Henderson said. “I thought our guys battled their hearts out and I thought, defensively we were tough. We battled in every aspect of the game, but we just didn’t score enough points. We came in confident, we expected to compete, and we just fell a little short.”

Early throughout the first half, the Jackrabbits looked like the team that hadn’t lost since December and a team that many thought could pull the upset.

They led 17-15 in a fast-paced, back-and-forth first 10 minutes, led primarily by Baylor Scheierman and Douglas Wilson. But after that, the Jackrabbits slowed down and Providence began to settle in defensively, taking a 31-23 halftime lead.

Early in the second half, the Friars pushed that eight-point lead to 14 and they appeared to have all the momentum. But just when it looked like Providence might pull away, the Jackrabbits stormed back, cutting the lead to six with 11 minutes left.

The Friars would stretch the lead back to double digits, but the Jackrabbits again wouldn’t go away. They cut the lead to three on an and-one layup from Alex Arians with 2:37 left. SDSU would stay within three with less than a minute to go, but Wilson fouled Jared Bynum on a 3-point attempt with 29 seconds left.

The Providence guard hit all three free throws and pushed the Friar led to six, essentially ending any chances of an SDSU comeback.

“We talked to the players about our culture, and I thought this was a culture game vs. style” Providence coach Ed Cooley said. “I thought our players were resilient today and we did a great job.”

Scheierman led all scorers with 18 points and 10 rebounds and played all 40 minutes. Wilson scored 13 with four rebounds and three assists in the final game of his Jackrabbit career.

“As a kid growing up, I never imagined myself being in the position I was in,” Wilson said when asked about the impact SDSU has had on his life. “I’m really grateful that South Dakota State gave me that opportunity and they really stuck with me from day one. They’re always going to have a place in my heart no matter what.”

But the Providence defense made things difficult for the Jackrabbits. They scored 30 points under their season average, coming in as the second highest-scoring team in the country at 86.7 points per game. They shot 38.6 percent from the field and were mostly held in check from behind the arc, making seven of their 22 3-pointers.

For the Friars, Noah Horchler and Al Durham led the team with 13 points and Bynum scored 12 points in 25 minutes. Their leading scorer this season, Nate Watson, was held to six points in 3-7 shooting.

As a team, the Friars also didn’t shoot the ball very well, going 39.3 percent from the field. They shot 8-22 from the three-point line and 10-12 from the free-throw line. Providence out-rebounded the Jacks 41-32, including 11-5 on offensive rebounds.

The Friars (26-5) earned their first tournament win since 2016 and their 16th in program history. Up next for them in the round of 32 is 12th-seeded Richmond, who upset Big Ten Tournament champion and No. 5 seed Iowa in the first round.

For the Jackrabbits, their historic season ends with another first-round exit in the NCAA Tournament, and while they may be disappointed right now, it was still a season for the record books for SDSU.

“I think the disappointment is a little more at the forefront right now,” Scheierman said. “I’m sure in the next week or so, we’ll reflect on the season, and it’ll show that regardless of what happened here today, like coach said, our season wasn’t defined just on this game and we had one heck of a season.”