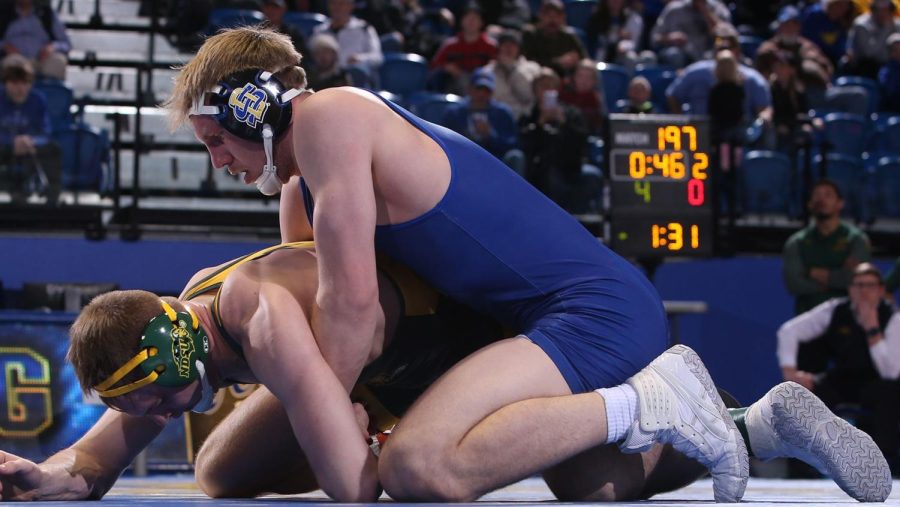 In total, six of nine Jackrabbits were seeded in the top eight in their respective weight classes, including Clay Carlson, the only Jackrabbit to receive a bye into the quarterfinals. The two-day tournament began Saturday at 11 a.m. with preliminary rounds and quarterfinal matchups.

“The seeds that we got I think are pretty spot on,” coach Damien Hahn said before the tournament. “I think the committee did a fairly good job of looking at the body of work and putting guys in the appropriate places.”

Second-seeded Clay Carlson, at 141-pounds, won his quarterfinal matchup with a 6-2 decision over Darren Green of Wyoming. Carlson was followed up by Cade DeVoss, the No. 2 seed at 174 pounds. DeVoss earned a pair of victories, first over Air Force’s Sam Wolf, 5-2, in the opening round, followed by a 3-0 shutout of Iowa State’s Joel Devine in the quarterfinals.

Then in the 197-pound bracket, two-time NCAA qualifier and No. 2 seed Tanner Sloan also advanced to the semifinals with a pin over Kayne Hutchison of Air Force, then posted a 5-1 decision over Alan Clothier of Northern Colorado.

At heavyweight, A.J. Nevills became the final Jackrabbit to advance to the semis with a pair of one-point victories. The first was a 3-2 victory against Utah Valley’s Chase Trussell, followed by a 5-4 decision in the quarterfinals over West Virginia’s Michael Wolfgram.

“Whoever gets us, that’s a bad matchup. I really do feel that way,” Hahn said. We have to control what we can control, and that is the effort we put out there on the mat. And I think we’re doing that.“

Then, consolation and semifinal matches followed at 5 p.m. Saturday, with Sloan being the only Jackrabbit to advance to the championship match.

Sloan matched up against North Dakota State’s Owen Pentz, the No. 6 seed. Sloan defeated Pentz in an 8-0 major decision. Sloan then advanced to the championship match on Sunday, where he faced top-seeded Stephen Buchanan of Wyoming. Sloan was narrowly defeated in a 3-2 decision, missing out on being SDSU’s first Big 12 individual champion since 2018.

Carlson lost his semifinal match in a 5-2 decision to No. 3 Andrew Alirez of Northern Colorado. In the 174-pound semifinal, DeVoss lost to Missouri’s Peyton Mocco in a 2-0 shutout. At heavyweight, Nevills was pinned by top seed Wyatt Hendrickson of Air Force.

As a team, the Jackrabbits finished the two-day meet in sixth place in the team standings with 66 points. Missouri claimed the team title with 131.5 points, followed by Oklahoma with 113 and Iowa State with 110.

Up next is the NCAA Division I Wrestling Championships March 17-19 with Carlson, DeVoss, Sloan and Nevills all receiving automatic bids into the 330-wrestler field.

“I think the culture of this program is better than its ever been,” Hahn said. “You’ve got a couple of years to get through some things, get your recruits in the mix and lay down the foundation.”