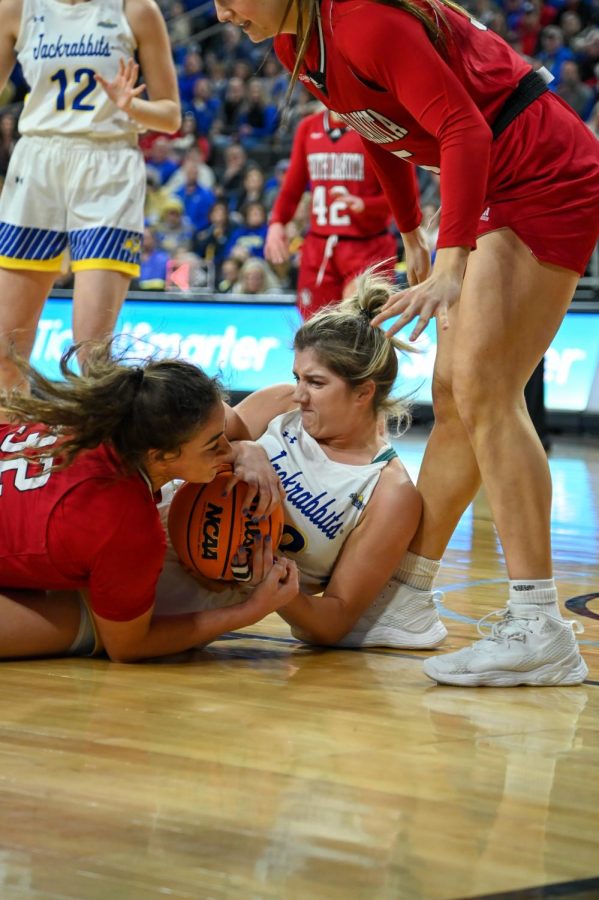 Paiton Burkhard fights for the ball with Kyah Watson in the Summit League Tournament championship game Tuesday afternoon at the Denny Sanford PREMIER Center. Burckhard had 15 points in the Jacks' loss.

SIOUX FALLS – The South Dakota State women’s basketball (23-9, 17-1) team suffered a heartbreaking loss to South Dakota (27-5, 17-1) in the championship game of the Summit League Tournament. The Coyotes earned the automatic bid to the NCAA Tournament in their 56-45 win over the Jackrabbit Tuesday at the Denny Sanford PREMIER Center.

Both teams struggled from the jump, but USD was able to find their footing in the second half of the game. In the first quarter, The Jacks were shooting 33% from the field, while USD was shooting only 20%. It was a defensive battle throughout that saw the Yotes prevail.

“It was definitely tough to get shots,” Paiton Burckhard said after the loss. “We got good looks, but it was tough to get inside. That led to getting them stops and getting into transition

South Dakota controlled the third quarter and would hold a seven-point advantage heading into the final frame. The Jackrabbits were given chance after chance in the fourth quarter to come back from their deficit, but the shots were not falling. SDSU had 15 offensive rebounds in the game and had 0 second-chance points to show for it.

The Jacks also only had 12 points in the paint. That area of their game is a big part of their gameplan and USD’s Hannah Sjerven defended the paint the entire game. Coach Aaron Johnston complimented Sjerven’s paint defense.

“Points in the paint were hard to come by,” Johnston said. “That’s a big thing that we rely on. We just didn’t find the balance with some of those threes in the first half. In some ways, the game should’ve been further out of reach. 50% of our game was good enough to win today, the other 50% wasn’t.

SDSU’s leading scorer Myah Selland struggled the entire game and did not make a field goal in the contest. She had 5 points, all from free throws, and shot 0-for-10 from the floor. She had to exit early in the game after picking up her second foul in the first quarter.

Senior Tylee Irwin led the Jacks in scoring and looked very aggressive to score during the game. She finished with 15 points and had three 3-pointers. Burckhard followed with 14 points and six rebounds.

SDSU’s long scoring droughts would be the killer in the game as they only shot 26% in the second quarter and 13% in the fourth.

“I think we couldn’t get into a rhythm,” Irwin said. “Sometimes it’s pretty deflating to see the shots not falling in a big game like that.”

Sjerven led the Coyotes in scoring with 19 points, while Summit League Player of the Year Chloe Lamb had 17 points. Many of Lamb’s buckets were key 3-pointers that would spark runs for USD.

After the game, the players in the All-Summit League Tournament Team were announced and four of them were in the championship game. Burckhard and Selland were named for SDSU, while Sjerven and Lamb were on it for USD. Lamb was also named the Tournament MVP. Naomie Alnatas of Kansas City was the fifth player named to the team.

Now, the Coyotes head to the NCAA Tournament, while the Jacks will have to wait until Selection Sunday and hope that their resume is good enough to earn an at-large bid.

Last season, the Jackrabbits earned their first-ever at-large bid but fell to Syracuse in the first round. Selland did not play in the game and that was key in the loss.