All around effort propels Jackrabbit women past Oral Roberts 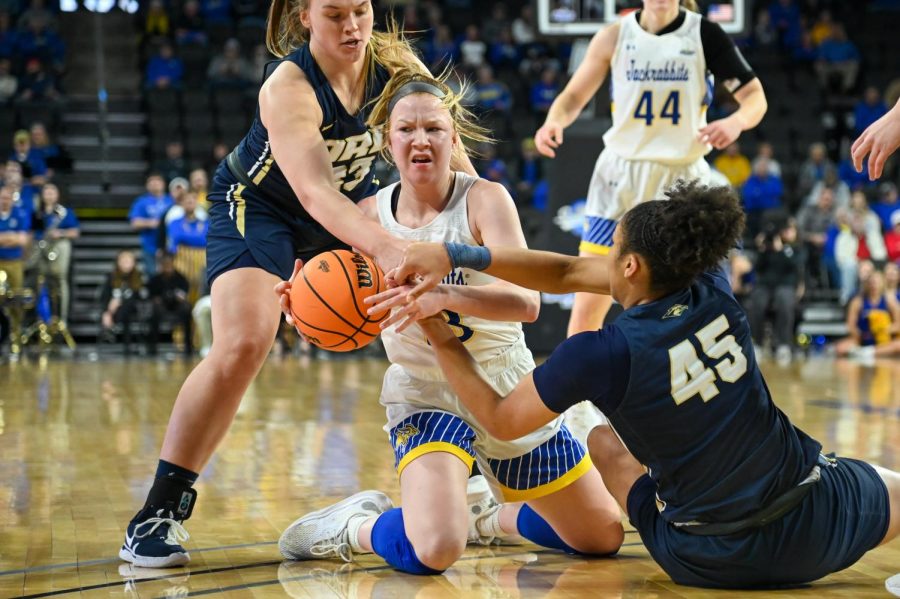 SIOUX FALLS – The semifinal round of the Summit League Tournament kicked off Saturday afternoon with a victory for the South Dakota State women’s basketball team over Oral Roberts 72-53.

The Jackrabbits (23-8, 17-1) advance to the Summit League championship game Tuesday at 1 p.m. They will play the winner of the other semifinal of the day between South Dakota and Kansas City. SDSU returns to the championship game after falling to No. 8 Omaha in the opening round a year ago. They haven’t won the tournament since 2019.

“It’ll be fun to get around that SDSU crowd tomorrow,” Paiton Burckhard said on advancing to the championship game. “We still have things to accomplish, so we’re just staying focused and locked in to be ready to go tomorrow.”

Oral Roberts (16-15, 10-8) got off to a good start in the game, only trailing SDSU by four points heading into the second quarter. The Golden eagles trailed 24-20 with 5:41 left in the half, but they would go into a scoring drought and did not score another point the rest of the quarter.

The Jacks would close the half on an 8-0 run and extended that run coming out of the break to 18-0 before ORU scored a point. By that point, the Jacks led 42-20 and held a large lead through the rest of the contest.

“We did a really good job of being connected and moving as a team,” Tori Nelson said. “They have some really big post players, and we did a good job handling that. Our defense definitely led to good transition offense for us as well.”

It was a complete team effort for the Jackrabbits as they got many contributions off the bench and had four players score in double figures.

Myah Selland and Burckhard each led the way with 16 points apiece. 11 of Burckhard’s points came in the fourth quarter alone. Nelson continued her good tournament run as well, finishing with 11 points.

“I think Haleigh and Kallie have both been fantastic for us all year long,” coach Aaron Johnston said after the win. “With them, we can add to our team with both of those players coming off the bench. They don’t have numbers that some other people have, but in terms of quality, they’re fantastic.”

For the championship game, the Jacks will either play the Coyotes or the Roos. In their regular season matchups, they went 2-0 against Kansas City and split their matchups with USD.

In its Dec. 20 game with Kansas City, SDSU won the game on the road 85-78. The Jacks only held a four-point lead going into halftime, but Paige Meyer scored 8 of their 20 fourth quarter points to give them a seven-point win. The Jacks will be without Meyer for the rest of the tournament because of an injury she suffered in SDSU’s second game against Kansas City Feb. 26. The Jacks won that game handily 94-62.

SDSU’s lone conference came Jan. 8 to South Dakota in Vermillion. The Jacks were held to a season-low, only scoring 42 points, and lost the game by 23 points. SDSU did not have any players score in double figures that game as Nelson was their leading scorer, only scoring 9 points.

Their matchup Feb. 5 in Brookings was a closer affair, and the Jacks won the game 75-65. A big third quarter from the Jacks was the difference in the game as they outscored USD 23-12.

The championship game will be Tuesday at 1 p.m. at the Denny Sanford PREMIER Center.