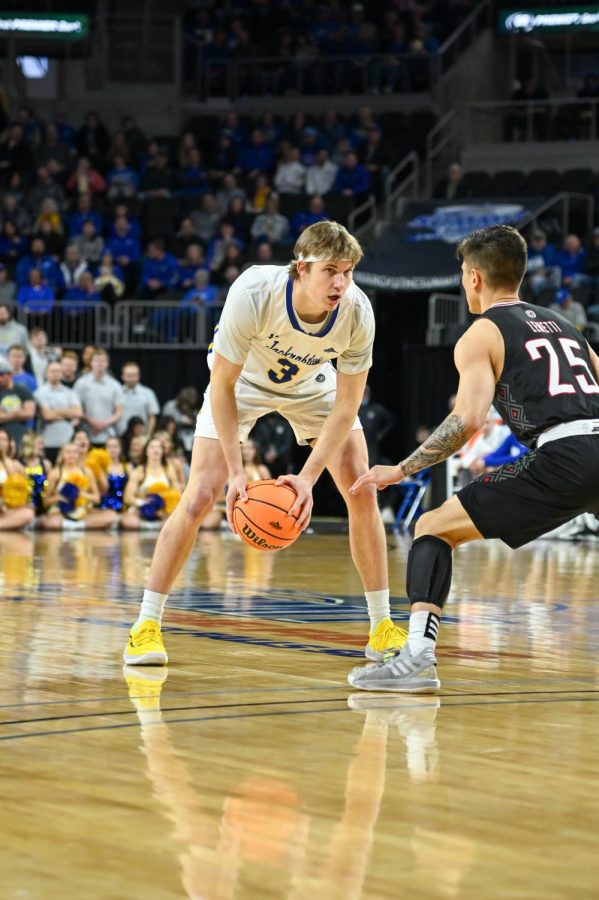 Baylor Scheierman with the ball against Omaha in Sioux Falls at the Summit League Tournament. He finished with 20 points in the Jacks' eight-point win.

SIOUX FALLS – After a tighter first half than the team would have wanted, the Jackrabbit men’s basketball team (28-4, 18-0) pulled away in the second to beat Omaha 87-79 in the quarterfinal round of the Summit League Tournament.

The win was the SDSU’s 19th straight and they have not lost to a single conference opponent all season. It was also their 28th overall win on the year, which tied the record for the most wins in a season in school history. Meanwhile, Omaha’s (5-25, 4-14) season ends despite a game-high 34 points from Frankie Fidler.

In the first half, Omaha jumped first scoring the first 5 points of the game, then a 7-0 response from the Jacks gave them the lead. Things were back-and-forth throughout until two straight 3-pointers from Felix Lemetti gave the Mavericks a 28-22 lead with 8:12 left in the first half.

Once this happened, a timeout was called, and it started to look similar to the Jacks’ experience in the tournament the last three years. They were down early to a team that only had 5 wins all season. SDSU has not made the NCAA Tournament since 2018 after making it three seasons in a row. In 2019, the Jacks were the top seed and upset by eighth seed Western Illinois. In 2020, they were the No. 2 seed and were upset by No. 7 Purdue Fort Wayne. Last season they were the top seed once again and lost in the semifinals to Oral Roberts, who would go on to the Sweet 16 of the NCAA Tournament.

A run by the Jacks after the timeout would get things tied back up and thanks to a friendly bounce at the buzzer on a 3-pointer from Baylor Scheierman, the Jacks took a 48-42 lead into halftime.

“There was no panic,” Scheierman said about the team’s rough start. “It’s a long game, it’s 40 minutes. It was the first half, and we didn’t think we were playing our best, so I was just trying to motivate them and turn things around that way.”

Fidler had 22 of his 34 points in the first half as that was a big reason Omaha was able to keep pace with the top overall seed.

Coming out of the break, SDSU started the half on an 8-2 run to take a 56-44 lead. The Mavericks were not able to pull within 10 points that often over the course of the second half and the Jacks came out of the game with an eight-point win.

“I didn’t think we were real sharp defensively in the first half,” coach Eric Henderson said after the win. “We certainly talked about some things in the locker room and that start of the second half, I thought our guys were really engaged and connected on the defensive end. When we do that, we can be pretty special.”

Scheierman finished the game with 20 points shooting 50% from the field and 66% from three. This was Douglas Wilson’s first time playing in the Denny Sanford PREMIER Center for the tournament as he was sidelined in 2020 with an injury and last season was played at the Sanford Pentagon. Wilson loved the opportunity to play in the atmosphere for the first time.

“It feels really cool,” Wilson said. “I haven’t played in a crowd like this since my sophomore year of high school. To get the chance to play in front of this crowd was a blessing and I look forward to it again Monday and Tuesday, hopefully.”

The Jackrabbits advance to the semifinals for the second year in a row and await the winner of the quarterfinal matchup tomorrow between Kansas City and South Dakota.