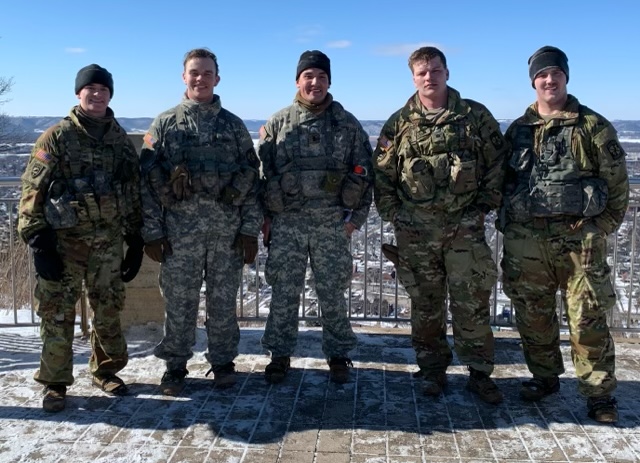 Carrying 35-pound “ruck-sacks” on their backs, the team tediously moved through the route, completing challenges that consisted of winter survival lanes packed with snow and vast elevation changes. These students are part of SDSU’s Army ROTC and were selected to represent their program in this event.

Army ROTC is the Army’s component of the Reserved Officers Training Corps, a college program providing military training to students who will commission as officers upon graduation.

South Dakota State has had a long military history, having an officer training program since its founding in 1881. To this day the Army ROTC continues to train students with many training events and challenges such as the Northern Warfare Challenge, for which these five cadets were selected to attend.

“Northern Warfare Challenge” is held in La Crosse, WI, and is hosted by University of Wisconsin-La Crosse Army ROTC. The challenge consists of winter survival lanes throughout a 16.7-mile course. Teams of five Army Cadets complete the course, each with a 35-pound rucksack and a “rubber duck” (non-functional training rifle), all while carrying a SKEDCO (a flexible sled used to evacuate casualties) alongside a 100-foot rope.

Following this year’s Ranger Challenge competition, Cadets Morris, Stegmeier, Bain, Vargas-Kunkel, White Bull and Grasma as Captain, started training under the guidance of MSG Exton. All the Cadets were returning from last year’s team apart from CDT Vargas-Kunkel, an essential addition to the team.

The team-based their training on their experience from the event last year. They practiced tying 5 different knots, treating cold-weather casualties, starting fires with flashlights and rucking. A ruck is a fast-paced march over terrain whilst carrying heavy loads of equipment, and this year the team made rucking a focus.

Each week, the cadets rucked and ran an average of 35-plus miles with loads that exceeded the competitions minimum weight. CDT Grasma had attended the Army’s Cold Weather Operation Course which gave the team a leg up on the competition in cold weather knowledge for military operations. CDT Grasma and CDT White Bull, who were already proficient at knot tying and treating casualties, were assets to the rest of the team.

As the weekend of the challenge came, the Cadets felt as prepared as they could be for the competition and set off for Wisconsin Feb. 11.

The team arrived and conducted an in-depth gear inspection. Following the inspection, cadets began the competition along with 37 other five-man teams. The first event had the cadets complete a written test on Army cold weather operations, placing them in first place for that event.

CDT Grasma then attended the captain’s brief to answer questions and concerns the team had. The next morning, the cadets stepped off at 6:30 a.m. to begin their long day against 37 other teams.

The weather was brisk with the temperature staying below zero for much of the day alongside 10 mph winds. After 13.5 miles, the team had to drag their SKEDCO with 135lbs for three miles through the winding hills to simulate evacuating a cold weather casualty, by far the most grueling part of the challenge.

After making the time cutoff and unloading the SKEDCO, the Cadets moved on to the final portion of the challenge. After climbing the final massive hill and reaching the peak of Granddad Bluff, the team completed the ruck march and moved to the rappel station. They rappelled off a 75 foot-high cliff, which is a new addition to the Challenge.

The professor of military science at SDSU, Lieutenant Colonel Jason Kettwig, said, “I’m proud of the performance of the team. They represented the university and the program well on a national stage.”

Overall, the SDSU AROTC NWC team placed fourth out of 38 and were awarded the third Brigade Commanders Challenge Coin.