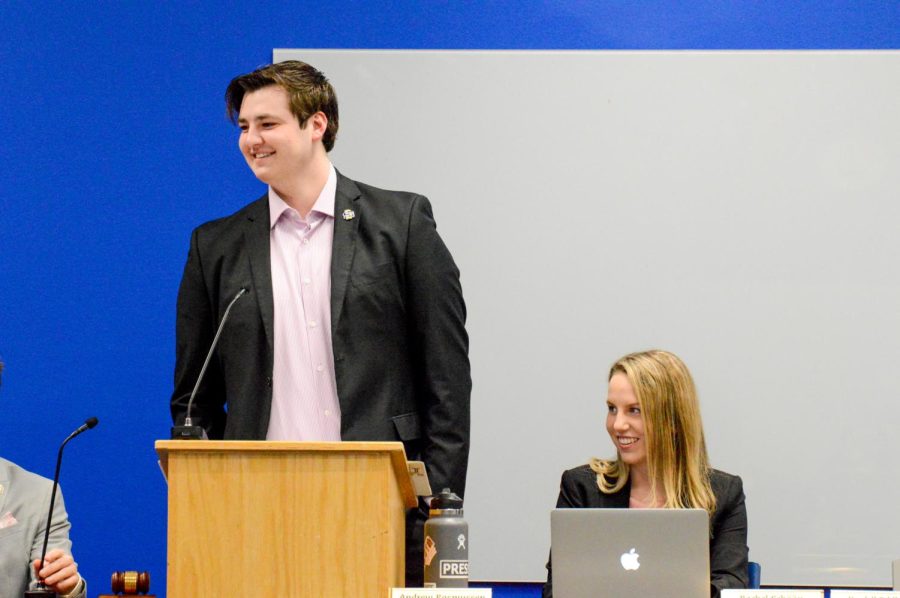 The term for Students’ Association President, Andrew Rasmussen, is coming to an end, but he isn’t done yet.

He is currently running for Brookings City Council, with some big ideas in mind.

For the past year, Rasmussen has served as Students’ Association President. It was never his intent to run for president when he joined SA last year. But after talking one day with his friend and running mate, Rachel Schöön, about some things that needed to be addressed, “We decided to go for it,” Schoon said.

“Running for president would allow me to step up my involvement, and it is another way to give back to both the university and the students at SDSU,” Rasmussen said.

Rasmussen considers the syllabus bank and the ADA campus map to be the most significant accomplishments of his term. Those issues were two of the three things they campaigned on, and are on track to be implemented by the end of the year.

“It’s the little differences that will make a student’s experience better,” he said.

Many people are impressed with Rasmussen’s leadership style. Michaela Willis, an advisor for SA, is one of those people. Willis said she thinks Rasmussen’s communication and listening skills are second to none, which is why he is so effective in his position.

“Andrew has remained committed to the students’ wants and needs which is incredibly important for an elected official, and remains with their best interests at heart,” Willis said when asked how he has done in his role.

Rasmussen’s plans for next year are to attend graduate school here at SDSU in the two-year Communication and Media Studies program and run for Brookings City Council.

Running for City Council at such a young age is uncommon, but Rasmussen couldn’t be more optimistic about it. He gives all his thanks for his time in SA.

“I would not have been interested in running for this if it wasn’t for my involvement in SA, but seeing the impact that the students have in Brookings and vice versa, I lined it up in my head, and it made me want to run,” he said.

Rasmussen said he hopes that people see his age as an opportunity to have a different perspective and voice. Brookings is a town driven by young people, and Rasmussen said a big concern right now is how to keep SDSU students in Brookings after they graduate.

“Being in the position I am right now and being a student that is just coming out [of college], will be excellent insight in how to solve this concern,” Rasmussen said.

Schöön is excited about Rasmussen running for City Council. She said that he has ideas that he wants to present that could significantly impact the students of SDSU and the Brookings area employers.

“I can’t think of a better candidate,” Schöön said.

Rasmussen hopes to implement a leadership program that connects the two by a series of lunch and learns, socials, presentations and other programs to help address the concerns with workforce challenges in Brookings.

“I don’t see everything I do as a job. It’s something I am passionate about,” Rasmussen said. “I like doing what I do.”