Beating SDSU, USD will be tall order for other Summit League teams 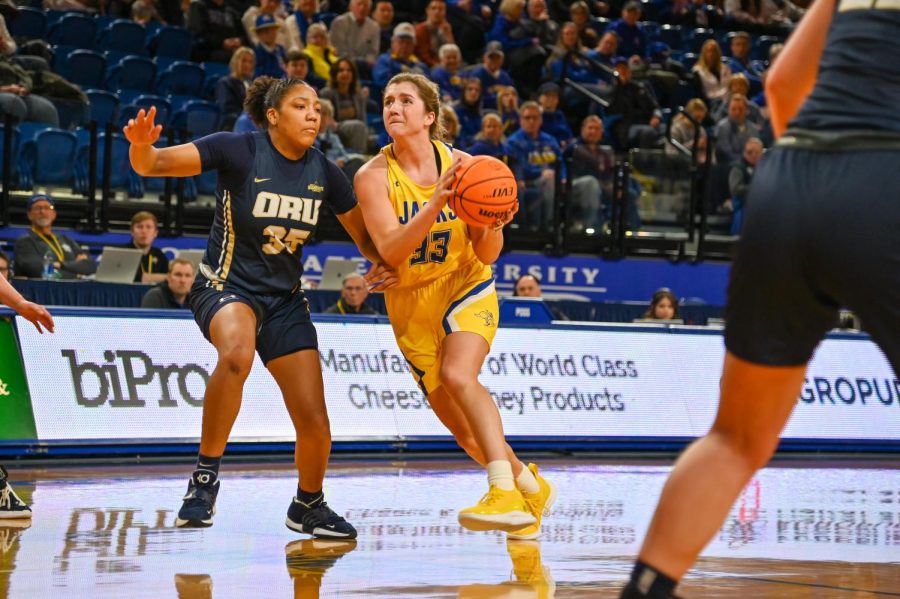 The 40th annual Summit League Basketball Championships are back at the Denny Sanford Premier Center this weekend with a spot in the women’s NCAA Tournament on the line.

The tournament is back at the Denny after last year’s tournament took place at the Sanford Pentagon due to COVID-19 since there would be no fans allowed. This year the fans will be back in full force to cheer on their respective teams.

South Dakota State and South Dakota headline this year’s tournament field as usual, as they each finished the Summit League records at 17-1. Their lone losses were to each other and were 17-0 against the rest of the conference. The rest of the league is going to have to play a perfect game if they want to knock off these powerhouses.

Here is a look at the respective matchups heading into this weekend:

The South Dakota State Jackrabbits earned the top seed for the tournament for the second season in a row and is the hottest team in the league right now, as they are winners of 13-straight games. The Jacks stumbled a bit in their non-conference schedule but picked up steam once Summit League play began as their lone loss was to South Dakota back in January. Other players are going to need to step up, as their starting point guard Paige Meyer will not play in the tournament due to an injury she suffered in their final game last Saturday against Kansas City. The Jacks were without Myah Selland at last year’s tournament and were upset by the No. 8 seed Omaha in the quarterfinal.

South Dakota was looking for another undefeated conference season like they previously did in 2020 after starting conference play at 11-0. Then they ran into the Jacks for the second time this season and suffered a 10-point loss at Frost Arena. Since that game they have won 6-straight games by considerable margins. The Coyotes will be playing Western Illinois for the second game in a row as they beat the Leathernecks 75-48 Monday and outscored them by 30 points in the second half after a slow start. Chloe Lamb is leading the team in scoring and 4th in the Summit League, averaging 15.7 points per game.

Kansas City has vastly improved from last season after only finishing 10-12 overall and 7-8 in conference. The Roos had won nine straight games and were peaking at the right time until their final two games against USD and SDSU and lost each game by 22 and 32 points respectively. Up until those games, Kansas City was one of the hottest teams in the league and are being led by Naomie Alnatas averaging 18.3 ppg. However, if Kansas City wants to win the tournament, they are likely going to have to beat one and most likely both of the South Dakota teams.

The Golden Eagles out of Tulsa, O.k. have the same story as many other teams. They were playing really well up until they ran into the Jacks and the Coyotes. They were winners of five of their last seven games until they played the league frontrunners in their final two games of the year. They lost by nearly identical scores of 84-48 to the Jacks and 78-49 to the Coyotes. They will likely run into SDSU if they can get past UND and are going to need a miracle to win.

North Dakota’s season started off well in conference games, going 9-5 to start, but lost their final four games of the season, all by double-digits. The Fighting Hawks are led by Summit League leading scorer Kacie Borowicz, averaging 19.6 ppg on the year. They play Oral Roberts, who split the season series, winning by 19 back in January and most recently losing by 16 Feb. 19.

NDSU struggled all season long but did show promise throughout the season. They kept it close with the No. 10 team in the country, Arizona back in December. They beat rival North Dakota twice and played in many close games that they could not finish. The Bison lost both games against Kansas City in the regular season but both games were won by less than 10 points, so an upset bid is possible.

The Leathernecks really got unlucky in the final weeks of the season due to their team getting hit with COVID-19. Many of their final games were postponed and eventually played, but their game against Omaha got canceled altogether. They’ve lost four games in a row and had USD on the ropes in the first half in their game Monday, but only scored 15 in the second half, while USD scored 45. They get another shot at the Coyotes Saturday.

Denver was on the outside looking in before the tournament and things were looking bleak early on as the Pioneers started off conference play 0-8. They finished the schedule 5-5, including winning their last two games of the year. One of those wins was a statement 22-point win against Western Illinois on senior day. They are going to do everything they can to pull off an upset bid on the Jackrabbits.