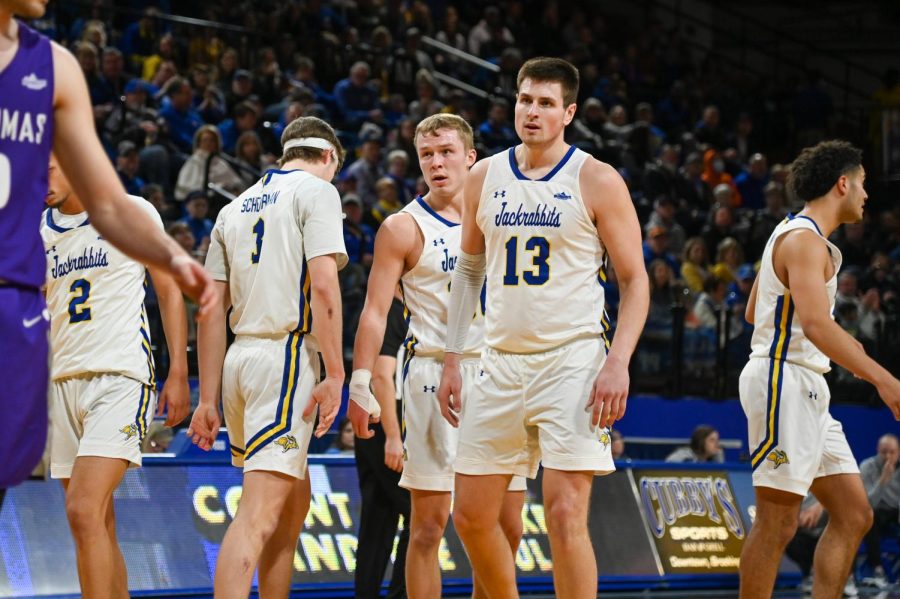 The South Dakota State Jackrabbits became the first team in Summit League history to go undefeated in conference play. They now set their sights on the conference tournament, where they'll face Omaha in the quarterfinals.

The South Dakota State men’s basketball team ended its regular season Saturday with a hard-fought 86-75 win in the Swinney Center against Kansas City, and with that they made history.

The Jackrabbits became the first team in Summit League history to finish the regular season undefeated in conference play. They went a perfect 18-0 in the conference, and are 27-4 overall this season.

But after needing a double-digit comeback and overtime to beat Oral Roberts two days earlier, the Jacks had to fight off numerous Kansas City rallies Saturday. Midway through the first half, SDSU built a 15-point lead after going on a 23-4 run. But UMKC responded with a 16-4 run of their own to cut the lead to three with under two minutes to go before eventually trailing by eight at halftime.

The Jacks would again push the lead to double digits midway through the second half, but the Roos would again not go quietly, quickly cutting the lead to five. But they could not get any closer, and the Jacks managed to hang on and win by 11.

As a team, the Jackrabbits shot 53.7 percent from the field, 45 percent from behind the arc, got to the foul line 15 times in the second half, and hit 19-25 free throws total.

UMKC also shot the ball 50 percent from the field, but only hit four of their 16 three-point shots.

With their regular season over, SDSU now looks ahead to the Summit League Tournament in Sioux Falls next weekend. The Jacks are the top seed in the tournament and will face eighth-seeded Omaha Saturday at 6 p.m.